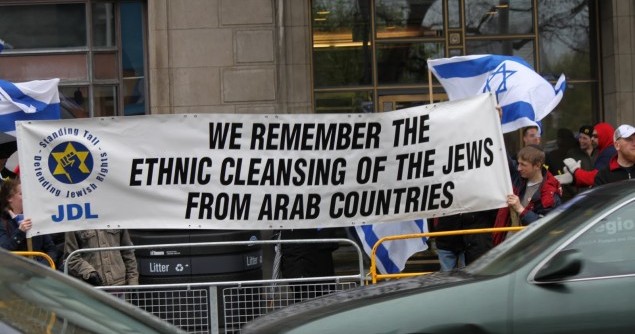 In the shadow of Prime Minister Benjamin Netanyahu’s theatrics at the United Nations recently, armed with his cartoon Iranian bomb, Israeli officials launched a quieter, but equally combative, initiative to extinguish whatever hopes have survived of reviving the peace process.

For the first time in its history, Israel is seeking to equate millions of Palestinians in refugee camps across the Middle East with millions of Israeli citizens descended from Jews who, before Israel’s establishment in 1948, lived in Arab countries.

According to Israel’s deputy foreign minister, Danny Ayalon, whose parents were originally from Iraq and who has been leading the government campaign, nearly a million Jews fled countries such as Iraq, Egypt, Morocco and Yemen. That figure exceeds the generally accepted number of 750,000 Palestinian refugees from the 1948 war.

Israel’s goal is transparent: it hopes the international community can be persuaded that the suffering of Palestinian refugees is effectively cancelled out by the experiences of “Jewish refugees”. If nothing can be done for Arab Jews all these years later, then Palestinians should expect no restitution either.

Over the past few weeks that has been the message implicit in a social media campaign called “I am a refugee”, which includes YouTube videos in which Jews tell of being terrorised while living in Arab states after 1948. Mr Ayalon has even announced plans for a new day of national commemoration, Jewish Refugee Day.

This month, the Israeli foreign ministry and US Jewish organisations formally launched the initiative, staging a conference in New York a few days before the opening sessions of the General Assembly.

Israel’s choice of arena – the UN – is not accidental. The campaign is chiefly designed to stifle the move announced by Palestinian President Mahmoud Abbas in his General Assembly speech last week to begin seeking UN status for Palestine as a non-member state.

After opposition from the US forced the Palestinians to abort their bid for statehood at the UN Security Council last year, Mr Abbas is expected to delay making his new request until November, after the US presidential election campaign to avoid embarrassing President Barack Obama.

Mr Abbas’s move has spurred Israel to take the offensive.

Anyone who doubts that the Israeli government’s concern for Arab Jews is entirely cynical only has to trace the campaign’s provenance. It was considered for the first time in 2009, when Mr Netanyahu was forced – under pressure from Mr Obama – to deliver a speech backing Palestinian statehood.

The NSC’s advice is that Arab Jews, known in Israel as Mizrahim and comprising a small majority of the total Jewish population, should be made a core issue in the peace process. As Israel knows, that creates a permanent stumbling block to an agreement.

The NSC has proposed impossible demands: contrition from all Arab states before a peace deal with the Palestinians can be reached; a decoupling of refugee status and the right of return; and the right of Arab Jews to greater compensation than Palestinian refugees, based on their superior wealth.

Israel is working on other fronts too to undermine the case for Palestinian refugees. Its US lobbyists are demanding that UNRWA, the UN agency for the refugees, be dismantled. And bipartisan pressure is mounting in the US Congress to count as refugees only Palestinians personally displaced from their homes in 1948, stripping millions of descendants of their status.

Moreover, many, if not most, Arab Jews left their homelands voluntarily, unlike Palestinians, to begin a new life in Israel. Even where tensions forced Jews to flee, such as in Iraq, it is hard to know who was always behind the ethnic strife. There is strong evidence that Israel’s Mossad spy agency waged false-flag operations in Arab states to fuel the fear and hostility needed to drive Arab Jews towards Israel.

Likewise, Israel’s claim that it has a right to represent Arab Jews collectively and lay claim to compensation on their behalf ignores the reality that Israel was compensated handsomely for absorbing Jews, both through massive post-war reparations from countries such as Germany and through billions of dollars in annual handouts from the United States.

But there is a more fundamental reason to be sceptical of this campaign. Classifying Arab Jews as “refugees” skewers the central justification used by Zionists for Israel’s creation: that it is the natural homeland for all Jews, and the only place where they can be safe. As a former Israeli MP, Ran Hacohen, once observed: “I came at the behest of Zionism, due to the pull that this land exerts, and due to the idea of redemption. Nobody is going to define me as a refugee.”

Mr Netanyahu’s government is making a deeply anti-Zionist argument, one it has been forced to adopt because of its own intransigence in the peace process.

Its refusal to countenance a small Palestinian state in the 1967 borders means the global community feels compelled to reassess the events of 1948. For most Arab Jews, that period is now a closed chapter. For most Palestinian refugees, it is still an open wound