Israel Master, U.S. the Poodle: How did this Happen? 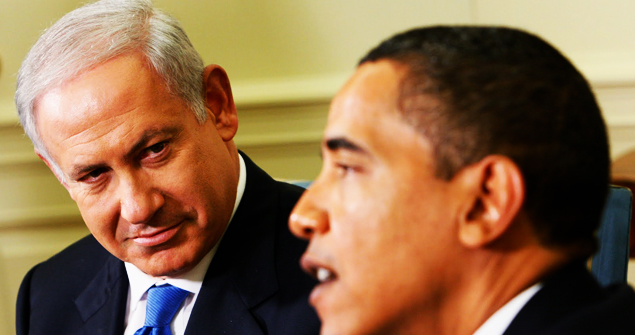 Thursday’s development in which Bibi Netanyahu harshly and publicly rebuked the Obama administration for refusing to draw red lines and set a deadline by which it would attack Iran if it didn’t renounce its nuclear program, represents a new nadir in Israel-U.S. relations:

Prime Minister Benjamin Netanyahu of Israel inserted himself into the most contentious foreign policy issue of the American presidential campaign on Tuesday, criticizing the Obama administration for refusing to set clear “red lines” on Iran’s nuclear progress that would prompt the United States to undertake a military strike. As a result, he said, the administration has no “moral right” to restrain Israel from taking military action of its own.

…“Those in the international community who refuse to put red lines before Iran don’t have a moral right to place a red light before Israel.”

Bibi has laid bare his calculations in that last sentence.  Iran is not a political issue, but a moral one.  The problem with turning purely political disputes into moral crusades is that reason and logic are often replaced by fervor and self-righteousness.  Thus stopping Iran becomes a moral obligation and U.S. reluctance to join the campaign is dismissed as cowardice or worse.

Having studied ancient Israelite history in college and graduate school, I’m brought to mind of the powerful empires like ancient Egypt, Mesopotamia, Assyria and Persia which had scores of vassal states whose leaders would make a pilgrimage bearing tribute to the sovereign.  The lesser figure would supplicate himself at the more powerful leader’s feet.

Our relationship with Israel upends this model.  Israel is the “weaker” state, but appears to lead us by the nose.  When we don’t do what it wants, it embarrasses or blackmails us.  In the ancient era, there were ways of dealing with such obstreperousness.  A satellite state that became troublesome could be suppressed by threats or force.  The thought that a vassal could plot to overthrow the sovereign without paying any price would’ve been unthinkable.

But that’s precisely what’s happening with Israel.  Bibi, who was told the president would not meet with him at the UN General Assembly, is irked he’s being dissed by Barack.  Bibi wants his war and the U.S. won’t give it to him.  As a result, Bibi’s not going to take his marbles and go home.  He’s going to fling them in Obama’s face.  In today’s world, with so many Jewish votes up for grabs in a close election, Obama can’t afford to blink when those marbles are coming at him.

Bibi is the leader of the equivalent of a vassal state who thinks he’s a potentate.  Obama doesn’t have the guts or heart to tell him.  As a result, the U.S. gets tossed hither and yon by the vagaries of the political winds blowing off the Mediterranean coast.  We don’t chart our own course.  Rather, we tack our sails in response to what Israel does.  This causes us to take our eyes off the real object of the race: Iran.  Thus, U.S. policy can’t address the real issues but has to manage the prima donna that is Bibi.

What is most unpardonable about Bibi’s antics is his gross intervention in the U.S. presidential race.  Joe Klein rakes the Israeli leader over the coals for this in his  MSNBC piece:

“I don’t think I’ve ever, in the 40 years I’ve been doing this, have heard of another example of an American ally trying to push us into war as blatantly and trying to influence an American election as blatantly as Bibi Netanyahu and the Likud party in Israel

In the past, Israeli premiers may’ve had distinct favorites but they never expressed such views publicly.  They always kept a careful distance from partisan politics.  Bibi, as he has with so many other democratic niceties in his own country, has thrown such precedents to the winds.  He’s not going to pretend he doesn’t have a dog in this fight.  He does and it’s Mitt Romney’s Irish setter (the one he tied to the roof of his family car on the way to their summer vacation).

Bibi’s move is naked political aggrandizement.  It’s the way the Likud plays the game in Israel.  Winner takes all and leaves no spoils to the losers.  What astonishes me is that previous presidents would make sure, for the sake of their own prestige and stature, that they put such chutzpah in its place.  Not this president.  He sits back and takes it out of fear of a Jewish electoral backlash.  His apparently laid back demeanor only emboldens Bibi further.

My only hope is that the American electorate, perhaps even some Republicans, will rebuke this brazen attempt to insert pro-Israel politics into a presidential race.  I know this isn’t the issue that’s foremost on the minds of most voters.  But anyone who gives this any degree of attention will be shocked by Bibi’s chutzpah.  Instead of helping Romney, the Israeli PM may hurt him.  The Republican is so desperate for any small advantage in what he knows will be an uphill race, he won’t call off the dogs.  He may find, however, that the dogs turn around and bite his presidential chances and a certain portion of his anatomy.

One Response to Israel Master, U.S. the Poodle: How did this Happen?