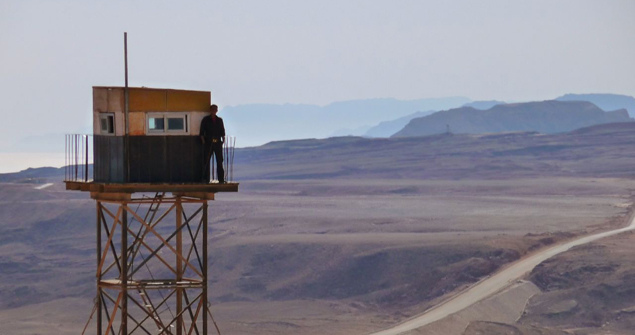 Today, something unprecedented happened along the Egypt-Israel border.

A group of Sinai Islamists, possibly including local Bedouins and foreign Al Qaeda elements, attacked a major Egyptian border post near the Kerem Shalom crossing.  They killed 16 Egyptian police officers who were preparing to break their Ramadan fast, then stole two armored vehicles, both of which sought to penetrate Israeli territory.  One vehicle broke through the barrier and was attacked by the IAF and destroyed.  The Israeli army had been warned in advance by the Shin Bet and was prepared for the border attack.  No such luck for the Egyptian police.

Since Mubarak’s overthrow, Islamists have reportedly assumed control of portions of Sinai, making alliances with disaffected local Bedouin.  Last summer, they attacked the southern Israeli city of Eilat and killed seven Israelis.  Five Egyptian police were also killed by Israeli forces who entered Egyptian territory in hot pursuit of the attackers.  This aspect of the attack was papered over by both sides out of fear it could rile Islamist and Egyptian nationalists and provoke further anti-Israel sentiment and violence.

But the Sinai militants have never attacked Egyptian security forces before in such a complex and deadly assault.  It means that the Al Qaeda forces there are stepping up their fight against the new Egyptian regime.  They have inadvertently dragged Hamas into the fight as well as Israel has attempted to blame it and Gazan militants for enabling it.  Hamas reacted strongly, condemned it, closed down the smuggling tunnels (which will punish anyone on either side who smuggled anything into or out of Gaza to aid this attack), and said in no uncertain terms that it would never strike Egyptian personnel and would never use any territory but its own to launch assaults on Israel.

While I’ve dismissed much of the wild bitching and moaning from Bibi Netanyahu about the perils that the Arab Spring poses for Israel, one thing is true: there are forces out there seeking to capitalize on the Arab Spring in places like the Sinai and Syria who may exploit the unrest to open new fronts in the fight against Israeli Occupation.  Ehud Barak has warned that Al Qaeda forces in Syria might try to storm the Golan border.  Haaretz’s IDF stenographer, Avi Issacharoff repeated this warning with a vastly overstated estimate of the presence of Islamists inside the Syrian rebellion.  Tonight, we’ve seen the Sinai militants do precisely what Barak warned the Syrian militants intended to do.

It is a different world Israel is facing.  A much harsher world, one that is a lot more difficult for Israel to control.

I expect that in the coming months there will be a new development in the Sinai.  Israel and the U.S. may determine, as the latter has in Pakistan, that the Egyptian military is hopelessly compromised in fighting the “Islamist menace.”  We may see both Israel and U.S. drones attacking Sinai targets and murdering the Islamists massing there as the former have in Yemen, Pakistan and Somalia.  Israeli drones have also been secretly attacking alleged Iranian arms supply convoys making their way through Sudan on their way to Gaza via Egypt.  It’s highly probable we’ll begin seeing those Israeli drones attacking Egyptian targets in Sinai.

This of course would be a tremendously sensitive matter.  Israel has a peace treaty with Egypt.  It doesn’t want to do anything to undermine it given that the Muslim Brotherhood is already predisposed to mistrust anything to do with Israel.  But if the Islamists directly threaten Israel as they did in their Eilat attack–Israel, which has a very short fuse when it comes to countenancing terror attacks inside its territory, it may feel forced to act.

To those who dismiss my prediction that the U.S. may join in such attacks, it is true that this would be an extremely sensitive and dangerous undertaking.  Egypt is a central nation in the Arab world.  To invade its sovereignty would be a radical new undertaking in the U.S. war on Islamism.  But Obama has shown himself unimpressed with established precedent when it comes to U.S. counter-terror policy.  Like George Bush and Dick Cheney, he’s predisposed to rock the boat when it comes to drone assaults against Muslim nations.  At the very least, we can expect U.S. drone surveillance over Sinai just as we’re spying on Iran (remember the U.S. drone downed inside Iran?).

If any of this happens, it will mark a further escalation in the use of targeted killing as a policy of state and the use of drones in pursuing this murderous policy.

Israeli ambassador Michael Oren has levelled a new wild-eyed claim that Iran is to blame for the Sinai strike.  Just as Israel blamed Iran for the Burgas terror assault and Eilat as well, like clock-work it’s exploiting the “I” word to ratchet up pressure for a military strike against Iran.  Oren, as usual, offered no support whatsoever for his claim, making it about as plausible as the likelihood that the Curiousity Rover is going to establish a new Israeli colony on Mars.

But even if there is a shred of truth to the claim, we could trace back any Iranian support for acts of terror against Israel to the latter’s own covert war against Iran and its nuclear program.  In other words, what goes around comes around, baby.  You reap what you sow, etc.