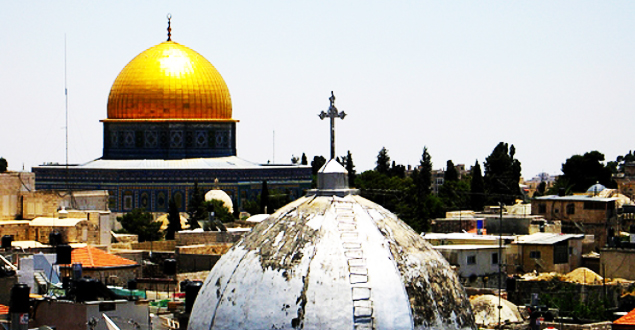 June 2012 marks 45 years of the Palestinian Naksa, commemorating the longest political and geographical occupation in modern history. “Palestinian Yaum Al Naksa” literally translates as the day of National Palestinian “Set Back” where in less than a week Israel took control of the Sinai and Gaza from Egypt and occupied the Syrian Golan Heights, the West Bank and East Jerusalem.

The old city quarters of East jerusalem are considered by architects, anthropologists, and historians as one of the oldest and most unique cities in the world but the Israeli occupation is rapidly transforming it into a fortification of endless colorless settlement structures.

The impact of the occupation on East Jerusalem or as its referred to by its native Palestinian inhabitants as the “sacred space” – sacred to Christians, Muslims and Jews – is deliberately and systematically changing the ancient character  of the 5000 year old city.

Prior to the Israeli occupation the character and beauty of East Jerusalem (Al Quds) were protected and enshrined by the Mamluk’s, Ottomans and the British mandate.

For centuries Palestinians family homes and old city quarter Khans, the commercial center, blended harmoniously with the splendid architecture of its 13th Century Walled City quarters that lie at the heart of East Jerusalem. Palestinians, mindful of the city’s special architecture, generally built their homes with white prized stone they brought from Qabatieh, Jennin quarries, and adorned their buildings with arches and domes.

On June 7, 1967 Israeli troops entered the Old City of Jerusalem.

Since then, the entire occupied city of East Jerusalem has been under the control of Israel who regulate every aspect of the city and the day-to-day life of its native Palestinian inhabitants.

In 1980, Israel passed the Basic Law: Jerusalem Capital of Israel. Declaring East and West Jerusalem as Israel’s eternal, undivided capital. Since that time, the Al- Maaqadesah (natives of Al-Quds or the sacred city) lost  their rights and privileges, including their right to protect their city’s architectural monuments, historical sites and rich heritage.

Israel effectively isolated Palestinians from their own community and outside world while deliberately implementing policies to destroy Palestinian Christian and Muslim Jerusalem and replace it with Jewish Jerusalem.

Israeli politicians employed the Israeli settlers who have become a strategic ally in a complex scheme  to erase Palestinian landmarks, homes and houses of worship. In Hebrew the common term for the Israeli settlements is “hitnakhluyot”, ‘evoking Biblical injunctions implying that those who settle Palestinian lands and confiscate their properties shall “inherit” the land they settle. The Israeli inheritors of East Jerusalem are some of its most fanatical radicals who are well funded – IDF protected with Ministry of Housing government funds.

No surprise, but the Israeli assault on Palestinian heritage is changing the landscape, beauty and sanctity of the city.

Since the 1980’s Israeli archeologists and settlers have been busy excavating church sites including the Church of Christ and the ancient Armenian district. For several decades the Vatican and Israel have been embroiled over church properties in East Jerusalem, including a recent dispute of the Last Supper room that received considerable international coverage.   While excavations of Christian religious sites are considerably tempered for fear of an international backlash, Israel’s excavations and altering of East Jerusalem’s Muslim sites have exhibited considerable latitude.

Simone Ricca, a conservation UNESCO architect documents the destruction of Palestinian heritage by Israeli authorities. He writes. “Immediately after the battle for the Old City ended, the entire Moroccan Quarter was razed, and its 650 inhabitants were evicted with only three hours to remove their belongings.”

The radical transformation of the East Jerusalem landscape is in clear violation of the Geneva Convention.

These treaties are meant to protect Jerusalemites, their ancient sites and human and civil rights – but Israel refuses to grant Palestinians their minimal fundamental protections. In August 1998, Israeli officially reported to the UN Human Rights Committee (HRC), that it has no obligations under the ICCPR in regard to the occupied territories.

The Israeli claim were echoed by Israeli supporters including, the Anti-Defamation League and American Israeli Political Action Committee (AIPAC) who continue to fund israel’s illegal settlers.

Israel employs a set of contrived laws including the 1952 Law of Entry that defines the rights of Palestinians of East Jerusalem entry to, exit and residency a privilege.

As a result they are rendered passive onlookers while the IDF, Israeli agencies, Israeli illegal settlers and their funders continue to destroy their city.

Israel considers the city’s Palestinian residents foreigners and tourists subjecting them to complicated  and costly applications for remodeling their homes; or renovating their hundred year old Khans and shops, historical monuments, churches and mosques.

Since 1967, Palestinian Jerusalemites have endured consecutive Israeli governments, Labor, Kadima and Likud, which may have different party affiliation but share one objective: To uproot non-Jewish inhabitants from their homes.

East Jerusalem’s unique status as “Sacred Space” with its multitudes of religious communities that have lived side by side for centuries are an obstacle to the Jewish claims of the city and the communities whose presence is critical to the city’s religious and historical status are threatened daily.

East Jerusalem has endured the indifference of the world at large, ambivalent of their city’s rich mix of religions, faiths, historical heritage and ecumenical tradition.

Palestinians whether Muslim or Christian believe they are witnesses of an unwritten Israeli agenda’ obvious to those living in East Jerusalem and the Occupied Territories whose aim and objective to annex and colonize all of Palestine, and erase all traces of it rich Christian and Muslim heritage.

5 Responses to Israel: Erasing the Beauty of East Jerusalem