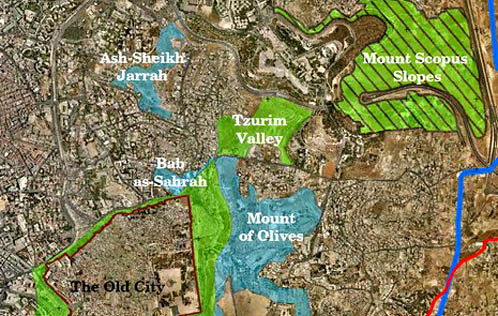 Last week, Israel opened a new checkpoint, ramped up plans to cut the West Bank in half, and stripped up to 70,000 Palestinians of their Jerusalem IDs.  This week, Israel is taking another step in purging East Jerusalem of its Palestinians– with a national park.

The Jerusalem municipality announced plans for Mount Scopus Slopes National Park, land-grabbing 750 dunams (nearly 200 acres) from the East Jerusalem neighborhoods of Al-Isawiyyah and Al-Tur. The reserve was approved by the Jerusalem District Planning Committee last April, but only now were the plans made public.

The land grab can take place in part because both Al-Isawiyyah and Al-Tur are on privately-owned land. And, in general, Palestinians live on private land, while Jewish Israelis live on state land. In this two-tiered system, Palestinians are constantly at risk from Israeli planners. When land is re-zoned to a national park, structures such as homes, and even roads are open for demolition.

The new national park will also create a barrier between Al-Isawiyyah and Al-Tur. As of now, there is open access between the two neighborhoods. The national park, however, will not interfere with transportation to settlements in East Jerusalem and the West Bank–because the tunnel road to Ma’ale Adumim runs under the Palestinian land.

Bimkom, an Israeli “planning rights” NGO, worked with the residents of Al-Isawiyyah to help expand housing construction in the village. While working with Al-Isawiyyah, Bimkom discovered the Nature and Parks Authority was simultaneously working with the municipality to re-zone a chunk of the Palestinian village. Bimkom architect Efrat Cohen-Bar said:

The Palestinian neighborhoods of East Jerusalem are crowded and they suffer from neglect and extreme shortage of public infrastructure. The residents are in desperate need of space by means of which they can improve their quality of life, even if slightly. The designation of land as a national park is a powerful and unjustified planning tool that is harmful for the population of East Jerusalem.

Together, Bimkom and Al-Isawiyyah attempted to reach an agreement with the municipality on land use, mitigating the land grab. However, the District Planning Committee rejected the proposal and went ahead with a more substantial land grab. Bimkom notes there are additional advantages to the Jerusalem municipalities:

The first advantage is that the declaration of an area as a national park does not require land expropriation and, as a result, it does not entail compensation of land owners. The second advantage is manifested by the fact that the responsibility for development and enforcement is transferred from the municipal authority to the National Planning Authority (NPA).

Meaning, not only does the land grab narrow the amount of space Palestinians can live on, but the city is also is absolved of obligations to pay for anything, such as road repairs, or the education of any children living on the re-zoned land.  National parks are advantageous on many fronts!

In East Jerusalem there are eight nature reserves in place or planned, totaling about 35% of East Jerusalem. These areas were at one time under Palestinian control; however, Palestinians no longer have the legal right to the land or a direct channel to appeal the confiscation. Local district committees make the decisions to re-designate the land. But once the new permit is issued, grievances can only be addressed to the National Planning Authority. It is nearly impossible to reverse the status of a nature reserve.

There is only one case where the Israeli government reversed a decision to re-zone Palestinian land as a nature reserve. In 1974 ‘Ayn Hawd al-Jadidah, a Palestinian village near Haifa (where Palestinians who were forced out of their original village of ‘Ayn Hawd relocated after the Nakba) was re-zoned as a nature reserve.  This change in status rendered the village “unrecognized.” The village was then barred from legal access to water, electricity, and sanitation. Even paved roads inside the village became illegal.  This same status of “unrecognized,” now applies to the homes in Al-Isawiyyah and Al-Tur, situated in the area now zoned for a national park.

In 1994 ‘Ayn Hawd was finally re-zoned back to residential use, although it took until 2007 for electricity to reach the village. As ‘Ayn Hawd is the only “model” for villages reversing a re-zoning order, the prospects for Al-Isawiyyah and Al-Tur are almost non-existent.  What is clear, is that there is no recourse, no appeals process, no way to contest the expropriation– and no way that Palestinians in East Jerusalem, who live in a home they own, are safe from the Judaization process.