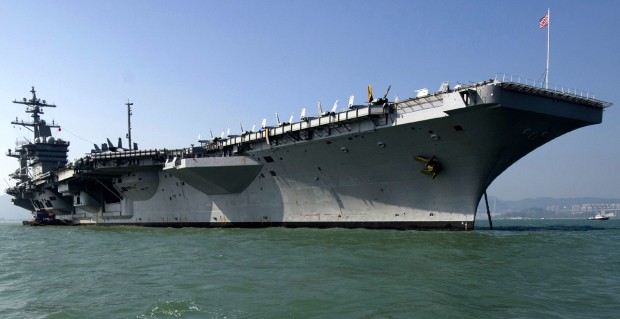 For the third day in a row the New York print edition of the NYT has got a front page article focused on war with Iran. Today’s is U.S. War Game Sees Perils of Israeli Strike Against Iran by Mark Mazzetti and Thom Shanker and it’s a whopper.

WASHINGTON — A classified war simulation held this month to assess the repercussions of an Israeli attack on Iran forecasts that the strike would lead to a wider regional war, which could draw in the United States and leave hundreds of Americans dead, according to American officials.

[T]he game has raised fears among top American planners that it may be impossible to preclude American involvement in any escalating confrontation with Iran, the officials said. In the debate among policy makers over the consequences of any Israeli attack, that reaction may give stronger voice to those in the White House, Pentagon and intelligence community who have warned that a strike could prove perilous for the United States.

The two-week war game, called Internal Look, played out a narrative in which the United States found it was pulled into the conflict after Iranian missiles struck a Navy warship in the Persian Gulf, killing about 200 Americans, according to officials with knowledge of the exercise. The United States then retaliated by carrying out its own strikes on Iranian nuclear facilities.

The results of the war game were particularly troubling to Gen. James N. Mattis, who commands all American forces in the Middle East, Persian Gulf and Southwest Asia….

What are the chances that Americans would be afforded a report on our military’s assessment without having it finalized/”balanced” with Israel’s opposing assessment? Not much. Note how we are being sold a bill of goods pretending there will be only mere, limited, slight repercussions. Nothing that could lead to hundreds of thousands dead like our Iraq adventure:

“Israeli intelligence estimates, backed by academic studies, have cast doubt on the widespread assumption that a military strike on Iranian nuclear facilities would set off a catastrophic set of events like a regional conflagration, widespread acts of terrorism and sky-high oil prices.

“A war is no picnic,” Defense Minister Ehud Barak told Israel Radio in November. But if Israel feels itself forced into action, the retaliation would be bearable, he said. “There will not be 100,000 dead or 10,000 dead or 1,000 dead. The state of Israel will not be destroyed.”

And here is Israel’s chosen American ‘liberal’ mouthpiece  delivering the ‘belief’ that an attack on Iran will go swimmingly. First softening the target (with four paragraphs of Uganda/Entebbe/Netanyahu’s dead bro: “Yonatan was the only Israeli soldier killed” warm up), then, after much equivocating, he goes in for the smooth landing:

The arguments I’ve outlined here — and those I’ll describe in my next column — all lead to a single conclusion: The Israeli political leadership increasingly believes that an attack on Iran will not be the disaster many American officials, and some ex-Israeli security officials, fear it will be.

These were vertigo-inducing conversations, to say the least. Next week, I’ll discuss why, from Netanyahu’s perspective, a strike on Iran, even if only marginally successful, might be worth the risk — and may be historically inevitable.

Right, surprise us Jeffrey. Or tell us again what we already know. Neocon hawks are steering the debate on how to take on Iran. This has been exposed time and again.  Tell us why we need a ‘liberal’ translator to deliver Netanyahu’s narrative for war?  It’s only vertigo-inducing because you’re so circular about it. We get it: Israel wants to attack Iran and they want the American public’s okay to go to war, again. Against the judgement of our own military leaders. And you are explaining that to us, gently. And ad nauseam (your drumbeat began 18 months ago). And we’re not even talking about gas prices…