Insisting on Their Humanity: Palestinian Plight 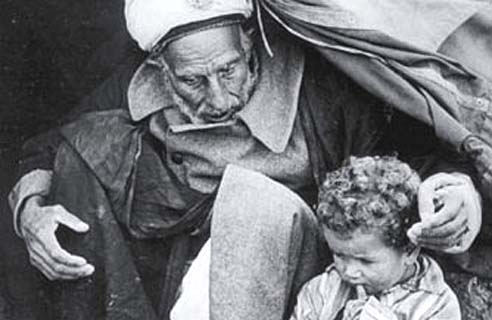 When a copy of William A. Cook’s latest book, The Plight of the Palestinians arrived in my mailbox, I initially felt a little worried. The volume, featuring the work of over 30 accomplished writers, is the most articulate treatise on the collective victimization of Palestinians to date. From Cook’s own introduction, ‘The Untold Story of the Zionist Intent to Turn Palestine into a Jewish State’ to Francis Boyle’s summation of ‘Israel’s Crimes against the Palestinians’, it takes the reader through an exhaustive journey, charting the course of Palestinian history prior to and since al-Nakba, the Catastrophe of 1947-48.

Still, I feared that something might be missing in this noble and monumental undertaking: Palestinian people’s own responses to the cruelties they’ve suffered. Would Palestinians be presented yet again as merely poster-child victims, eager for handouts?

The photograph on the cover was telling: a kindly old man with a white beard, who could have been any Palestinian or Middle-Eastern grandpa, is lovingly touching the hair of a toddler. The two are crouching before a small, stained tent. Al-Nakba was still recent, and the two Palestinians, separated by two generations appear tired and haggard as they are caught in this hopeless scene. Yet, somehow the grandfather insists on preserving his right to love his grandson. This insistence on one’s humanity has been the key strength which has allowed the Palestinian people to preserve their struggle and resistance before the wicked arm of occupation and oppression for nearly 63 years.

Do most academics know this? Do they truly comprehend what it is that makes an old man from a West Bank village face the brutality of Jewish settlers, year after year, as he returns to harvest his few remaining olive trees? Or a Palestinian woman from Gaza who keeps coming back to hold a vigil before the Red Cross office with a framed photo of her once-young son, now ailing in some Israeli jail?

What keeps them going is something that cannot be dissected scientifically or analyzed intellectually. It can only be felt, experienced, and partially understood. This understanding is essential, for without it much more time and effort would be wasted, discounting the most important component in the Israeli-Palestinian conflict: the Palestinian people.

Some intellectuals, although well-intentioned, often conflate the understandable weakness of the current Palestinian leadership and the steadfastness of the Palestinian people. They write about both entities as if they are one and the same. One of the best authors on Palestine rightly pointed at the huge discrepancies of power between Palestinians and Israel, noting that such an imbalance could not possibly lead to an equitable platform for negotiation. To demonstrate the point, the author refers to Palestinians as “almost totally powerless people”, negotiating with a “powerful occupier.”

But the Palestinian people are currently negotiating with no one. Their representatives merely represent themselves and their own interests. It is important that we preserve that distinction – between the Palestinian Authority in Ramallah and Palestinian people, who have held on to their rights for so many years, and unleashed two of the greatest expressions of people’s power and resolve: the First Uprising of 1987 and al-Aqsa Intifada of 2000. A whole population taking on the self-celebrated “greatest army in the Middle East” is hardly “powerless”. The Palestinian people have printed themselves on the practical discourse of this conflict, and they have proved themselves to be powerful players in determining their own fate.

Jeff Halper, the Director of the Israeli Committee against House Demolitions, understands this fact well. The peace and justice activist has spent decades working for a just settlement to the conflict, a journey that’s allowed him to work with numerous Palestinians. He has thus grasped something many politicians have intentionally or inadvertently missed. “Until they – the Palestinian people as a whole, not the PA – say the conflict is over, it’s not over.” He further states, in a recent article entitled ‘Palestine 2011’, that “Israel and its erstwhile allies have the ability to make life almost unbearable for the Palestinians, but they cannot impose apartheid or warehousing.”

Halper is correct, and history has repeatedly validated his assertion. There are limits to the power of the “powerful occupier”. It can kill, confiscate, destroy and burn, but it can never force the other into submission. Thus to speak of Palestinian victimization without discussing their collective resistance presents an incomplete version of the story.

The Plight of the Palestinians turned out to be an essential read, and a full and authoritative discourse. It offers a grim and detailed story of suffering and the ‘slow motion genocide’, which is important in order to appreciate the harshness of the Palestinian experience. Without this, one can never understand the anger, resentment and pain that are shared by several generations of Palestinians, in Palestine and in the Diaspora.

‘The Human Tragedy’ is laid bare in Part I. Every paragraph confronts the reader with gory details. But if such violence is the reality of the history of this conflict, why do many people understand it differently? The answer lies in Part 2: ‘Propaganda, Perception and Reality’. It starts with a quote, the Israeli Mossad’s own pre-2007 slogan: “By way of deception, thou shalt do war.” It seems that such a slogan has defined Israeli official conduct. However, civil society cannot be misled forever, and the powerful initiatives carried out by ordinary people around the world are what give Part 3 its value. ‘Rule by Law or Defiance’ is an uplifting introduction to activist efforts, with topics ranging from ‘The Russell Tribunal on Palestine’ to the ‘Necessity of the Culture Boycott’.

The Plight of the Palestinians is not just another chronicle of the history of a defenseless nation. While it is an unhesitant acknowledgment of that reality, it is far from being a celebration of victimhood. Rather, it documents the logical evolution from suffering to resistance.

In the essay, ‘Does It Matter What You Call It?’ two of my personal favorite authors, Kathleen and (late) Bill Christison write: “Palestinian resistance does figure in this dismal story. In the same small village where one is uprooting his family, others are building…”

It is the very balance between destruction and rebuilding, despair and hope, occupation and perseverance that makes the Palestinian people powerful. Their power cannot be demonstrated in numbers, but it can be felt, experienced, and understood. The Plight of the Palestinians: A Long History of Destruction spreads the seeds of understanding, which is so essential to any meaningful and lasting change.

– Ramzy Baroud (www.ramzybaroud.net) is an internationally-syndicated columnist and the editor of PalestineChronicle.com. His latest book is My Father Was a Freedom Fighter: Gaza’s Untold Story (Pluto Press, London), now available on Amazon.com.