Dubai the Winner in a ‘Game’ of Regional Turmoil 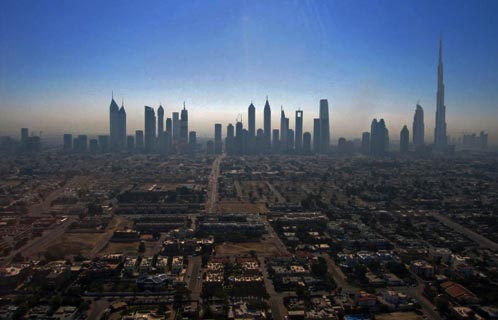 It’s Cairo, 1996.  A young man with a college degree is standing behind a cart selling melons.  The future looks bleak. Lacking the ‘wasta’ (connections) to land a poorly paid but secure job he knows he must move abroad.  He doesn’t, though, have enough money to try for the U.S or U.K.   Dubai, then.

He arrives, works hard, secures a job with a major multinational, is promoted, gets hold of that Canadian passport.  He moves to Canada with his family, lives comfortably in a five-bedroom house in the suburbs and visits his family in Egypt regularly. He buys land near his old family home and is building an impressive house.

This is the true story of a friend of mine.  It’s a story that has been repeated thousands of times over the last decade and a half.  If the measure of life is material achievement then he’s done extremely well.   The most telling point, however, was when I asked him some years ago what he thought of Dubai looking back. His reply was simple: ‘It was the place where I started breathing.’

It was a sentiment with which I identified completely but in a different context.  Leaving the economic disaster that was Ireland in the late 1980s I arrived in London.  This was where I started breathing.

Here’s a game. The next time you read a news story which talks about ‘turmoil’ in a particular Middle Eastern country wait until you see a phrase along the lines ‘Dubai to benefit from said turmoil’.

It’s happened a couple of times in the last month. First we had a report from CITI Investment Research and Analysis announcing that the tourist industry in Dubai was set to receive an unexpected boost from the arrival of people who had been looking to do a spot of scuba diving in Sharm el Sheikh or take one of those bizarre, slightly scary horse rides round the Pyramids.    More recently analysis of the impact of the troubles in Bahrain has focused on the possible re-direction of foreign direct investment, particularly in the finance sector, from wobbly Bahrain to stable Dubai.

This is not, however, a recent phenomenon.  If you trace the various calamaties that have affected the region over the past 20 years you’ll see a strong correlation between regional turbulence and a strengthened Dubai.  The first Gulf War proved to be a launching pad for the Jebel Ali port which up to that point had struggled to establish itself as the regional hub it has since become.

While the invasion of Iraq sent millions of refugees into neighbouring states, stretching their resources to bursting point Dubai could cherry-pick the best and brightest of Iraq’s professional talent and offer them a safe, secure home.  And that’s its principal strength – in a region that seethes with religious, political and tribal factionalism Dubai offers a haven.

Whether it’s been Indian businessmen fleeing the protectionism of Nehru’s administration in the 50s,  Lebanese families seeking shelter from a vicious civil war in the 80s or Afghanis looking for a safe haven from the Taliban, Dubai has taken them in.

I can remember, in the early days of the most recent boom, sitting in on an interview between a prominent Dubai businessman and a reporter from CBS Television.  In an off-the-camera discussion the reporter made the pertinent point that whenever you wake up in Dubai and look round the neighbouring countries all you see is trouble.  How is it possible for little Dubai to go on?

The businessman talked about the Communist insurgency of the 1970s that had begun in Yemen and threatened to engulf the Arabian Peninsula.  I can remember his words verbatim:  ‘I can’t remember a time when there hasn’t been some threat or other but there’s one precious commodity that we offer – openness.  If you come here, are looking to create a good life for you and your family and work hard, you will always be welcome.  But if you come to change the way we live and do business you will not.’

Nirvana on Earth?  No, of course not and Dubai’s issues – labour rights, human trafficking, money laundering, for instance – have been well catalogued.  The authorities have taken steps to deal with all of these but everyone agrees there’s still a long way to go.  There have been many victims of the recent economic turmoil who will have less than positive views of the city.  But this is true for any city on the planet.  I’m sure there are employees of Lehman Brothers who have rather less fond memories of Manhattan now than they had five years ago.

According to the predictions of many commentators in the West two years ago, wallowing in that most unattractive balm called Schadenfreude, there should be tumbleweed blowing down Jumeirah Beach Road by now. Instead you’re more likely to find a young man, recently arrived from a place of turmoil, driving his first car, with the window open, breathing in the cool winter air.