In the Call to be Heard, Millions are Ignored 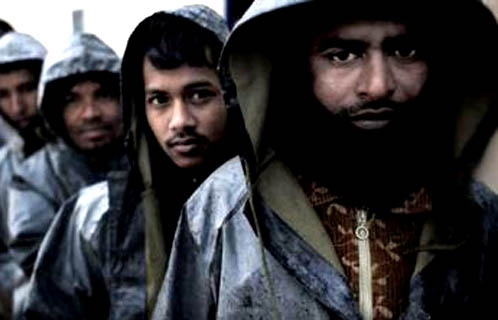 At last, someone mentioned them.

Reports in the media about Libya have understandably focused on the courage of the Libyans as they struggle to overthrow Gaddafi. They have also reported efforts by the wealthier nations to evacuate their citizens by air and by sea.

Only now have the international TV stations run a story about the thousands of nationals from countries that do not have the means or the inclination to send ships, aircraft to take them away. Countries that have no special forces and C130 transport planes to whisk their compatriots away from the violence. Bangladeshis, Indians, Thais, Pakistanis and Filipinos. People who are doing the dirty work, the heavy lifting that keeps the projects rolling and the oil flowing.

Across the Middle East there are millions of migrant workers working for low wages that are nonetheless better than what they would earn at home. Their families depend on their remittances.

But the price of keeping the home fires burning can be years away from their loved ones. Many of them have to pay money to agents to get their jobs in the first place, and often don’t start seeing a return from their work for months. In some countries a significant slice of their income goes to their sponsors as the price of renewing their work permits. Many live in dormitories with the minimum of privacy. They get to go home perhaps once every two years. Construction workers on some sites face safety hazards that would cause a scandal in Western countries.

They often work in a climate of institutional racism, not only from locals but from other migrants further up the food chain. Treated with disdain. Summoned and dismissed by a click of the fingers. Across the region, and notoriously within the GCC countries, domestic workers – especially housemaids – run the risk of violence and abuse from their employers. Workers are frequently left for months without payment when their employers go bust, or themselves are kept waiting for payment from their government clients.

Migrant workers feel unable to walk away from their jobs because they are aware of how much their extended families rely upon the money they send back home.

In many countries, they do the jobs that nationals refuse to do.  They sweep the streets and build the roads in temperatures of 45 degrees. They bring up the children of the urban middle classes so that the mothers can shop the malls and visit each other for tea.

At the height of the unrest in Bahrain, I recently commented that Manama was a city in which the motor functions continued while the brain was otherwise engaged. That was because the city is kept running by an army of low-paid migrant workers.

The demands of the protesters across the region are about the rights of citizens. I have not heard any protester rooting for the Bangladeshis, Keralans and Indonesians. No calls for labour laws to be adhered to, health and safety standards to be enforced, and for physical abuse to be punished with the full force of the law. Most of the time, these workers do not protest because they fear for their jobs. Their embassies might complain and provide what practical help they can, but they have little diplomatic and practical leverage, apart from barring their people from working in the region. But the effect of such measures is to damage the home economies.

This is the dark side of the region where I live. It’s easy for me to tell the world of the pleasures of living in the Middle East, and of my high regard for its culture. But I’m not the one who has to risk his life fifty stories up a construction site for twelve hours a day, and come “home” to a camp outside the city which I have to share with a thousand others.

I do not tar every host nation with the same brush. Some treat their migrant workers better than others.  And there are many individuals and companies that treat them with great humanity and respect.  But many others, if they looked into their hearts, would admit that they take those workers for granted, and could do more to give them decent lives during their years of residency.

Spare a thought for the thousands at the borders of Libya, traumatised and awaiting an uncertain future.