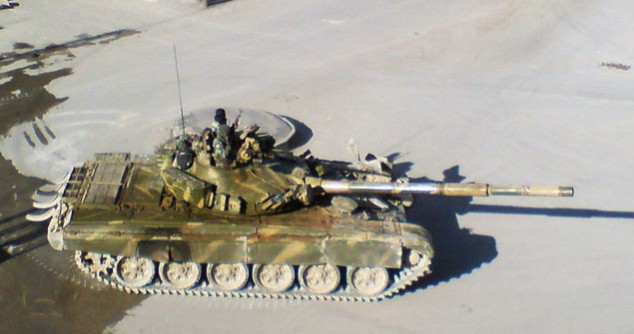 Imagine you are an officer commanding a tank in one of Syria’s elite armoured divisions, and despite endless and increasing civil turmoil over the past year you and your whole brigade have remained facing the Israelis on the Golan Heights. In your mind you have been defending the country against the Zionist aggressors, and you still have the self respect that this critical military task has given you.

But you are now a deeply worried man. Last night you heard that your brigade has been posted to Damascus to join the highly politicised Fourth Division which is commanded by Maher Al Assad, the younger brother of President Bashar Al Assad, and a feared hardliner who has already executed several young men during operations this week to regain control of the northern Damascus district of Barzeh.

As your tanks rumble north through the fertile fields on the short road from the Golan Heights to Damascus, you will know that fighting has been raging in Aleppo in the north and Deir Al Zor in the east. But even if some grieving family members have called you with news of your cousin’s death, you will certainly not have heard that the Syrian Observatory for Human Rights said 1,261 people were killed in Syria since only last Sunday, when the fighting escalated in Damascus, including 299 from the government forces.

You are a loyal Syrian, and have been a proud part of the army for more than ten years. It has given you a good living in a tough time, and you enjoy the social respect of your community. When you were on leave and went to your daughter’s prize giving at her secondary school, other families nudged each other and said: “Look, there is young Mohammad. He is an up-and-coming officer in the army. He will go far.”

But now you are about to be given an order to fire on your own countrymen, pounding people’s homes into dust. In a close-knit society like Syria’s you will certainly know someone who knows someone who lives there. It is also very likely that you will have to take your tanks through the streets, firing the main gun at buildings but also using the mounted machine guns to kill anyone who is still moving.

You are a trained military officer and are proud of your skills, and your courage under fire which was proved when Israeli jets dive bombed your unit a few years ago. But now you are about to fight in support of the shabbiha militia, who you regard as no better than thugs put into uniform to do the regime’s dirty work.

But what can you do? This question is working deep into your mind, and leaving you sleepless at night with worry. Can you refuse to fire on fellow Syrians? Your commander is well aware that your own family and community are far from Damascus, where you will be called into action tomorrow. The commander has already planned into his actions that many soldiers will find their breaking point if they are ordered to shoot into the homes of their own community.

One or two relatives might have murmured to you that a cousin or friend has already deserted to the opposition forces, but you know that the grim men from the State Security will be visiting their families and issuing out horrifying torture and eventual death in order to terrify people like yourself to stay in line. Even if you were to take the dramatic step of desertion, you would first have to call your mother, and get her and your sisters to over the border into Lebanon where they would face an uncertain future.

So the likely outcome is that you will remain in your tank, and press the trigger when ordered. You will no longer be a proud professional soldier, and you will know in your heart that you have become a political agent of a regime you fear. And you know that from now on there is no escape, because even if the unthinkable happens and the opposition wins, you will not have a future because you will have pressed the trigger.

Either you will become so desperate that you will go down fighting for a regime you have come to hate, or you will try to emigrate and try to find a job running a garage in Milwaukee.