“I’m With The Uprising of Women in the Arab World…’ 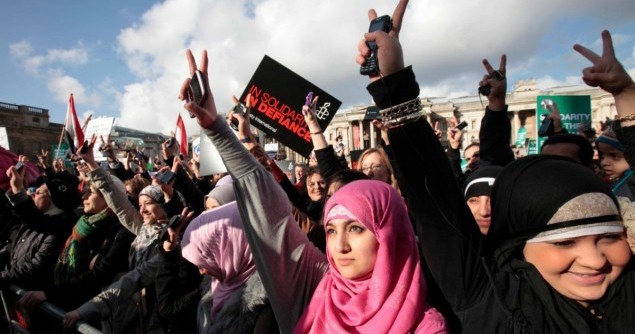 While the image of women participating in last year’s Arab uprisings has been repeatedly used to provide a narrative for the Arab uprisings, the outcome of what was dubbed the “Arab Spring” did not turn out to be that positive for women.

In Egypt, women hold 2 per cent of parliamentary seats in comparison to 12 per cent in the previous elections, and not one woman took part in the committee that wrote constitutional amendments. In Yemen, a report by the international NGO Oxfam states that women are worse off after the revolution in a country where a humanitarian crisis keeps growing. In Tunisia, a woman who was allegedly raped by policemen was in turn accused of public indecency when she filed a complaint.

Yet women have refused to let the fight for gender-equality be side-lined. In October 2011, a group of four Arab women from Lebanon, Palestine and Egypt started a Facebook page entitled Uprising of Women in the Arab World. While women in Lebanon are not necessarily fighting the same laws as Saudi women, they are finding strength in unity and using it to gain attention online.

The group says in their mission statement that “[it is] time for women and men to unite against the oppression of women in the Arab world.”

A truly grassroots movement that started as a small wave is now making headlines around the world. To mark the movement’s one-year anniversary, the page administrators urged people from around the world to post pictures of themselves holding messages to express their support for Arab women’s rights. People began to take notice, and today the page has over 43,000 followers. The photos (many of which are now going viral on social networks) came from all over the world, from women and men of all religions and backgrounds.

Messages also came from men. A Saudi teenager chose to point out the absurdity of a law that can make a young male family member the custodians of adult Saudi women: “According to law, I am the guardian for my widowed mother!” Another young man asserts: “I am with the uprising of women in the Arab world because I feel ashamed of having more rights than my sister.” In their support for the cause, men are not just showing their solidarity, they are showing that this is their battle too.

In their actions, women’s rights activists are truly carrying the flag of the Arab uprisings, which demanded authentic democracy. While women’s rights are sometimes seen as secondary to democratic change, gender equality is actually one essential aspect of true democracy.

Under dictatorships, gender inequality is too often seen as an unimportant detail in comparison to the big picture. In many revolutionary movements, marginalised individuals such as women and minorities are first offered hope for change, then end up facing the same discrimination after dictators have been toppled. They are told to wait, to be patient, and that their time will come.

This is wrong. Women’s rights are at the heart of human rights, therefore any pro-democratic claim simply cannot side-line half the population. Change for the better must be change for everyone, or it will ultimately be change for no one.

From that perspective, the Arab Spring is on-going. While some would say it has failed, initiatives like the Uprising of Women in the Arab World are reclaiming a place for ordinary people in political participation. By speaking out as marginalised members of society who refuse to remain second-class citizens, it’s clear that these women’s rights activists will not let go of last year’s momentum for change.

Nada Akl is a freelance journalist in Beirut