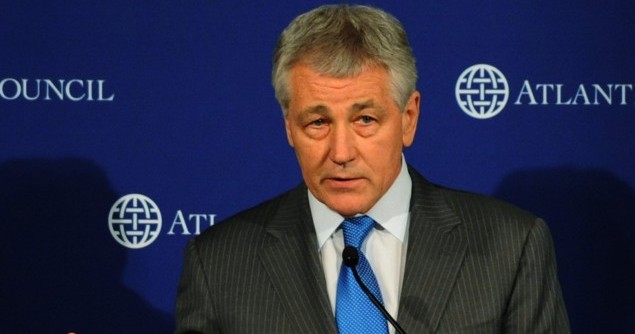 Reports are that Obama may tap former Senator Chuck Hagel, a Republican and Vietnam veteran, to be his next secretary of Defense. Hagel is a realist who has repeatedly bucked the neoconservatives (and as Eli Lake and Steve Walt say below, the Israel lobby is gearing up to try and do to him what it did to Chas Freeman 4 years ago). The Emergency Committee for Israel (ECI), for instance, is already gearing up to battle Obama over Hagel.

Yesterday, ECI’s Noah Pollak tweeted out one reason (among many) for why he’s so averse to Hagel: he is chairman of the Atlantic Council, a mainstream think tank. The Atlantic Council has posted a piece by a member of the council titled “Israel’s Apartheid Policy.”

Here are some more reasons for why the neoconservatives are coming out swinging against Hagel:

In November 2010, Hagel led a forum on the Iran issue at the Atlantic Council, which he chairs. His comments make clear that he would never go to war with Iran, and the idea that all options must be on the table is one that he specifically rejects.

He says that only in an Alice in Wonderland world would we go to war with Iran. The American public doesn’t want a war, military suicides and divorces are at all-time highs, Hagel says, and he takes exception to Stuart Eizenstat, the lobby’s man on the panel, saying that if we had to we could put 100,000 troops on the ground in Iran.

Some of the transcript:

As to the use of military force, whether it’s for a political motive or not, I don’t think I have to remind the public that the United States of America is currently in two wars – two of the longest we’ve ever been in.  And before we finally wind our way out of each, they will be the longest wars we’ve ever engaged in.

That has come at a very significant cost to this country.  I think it’s undermined our interest in the world.  You don’t need to go much beyond asking any general who’s in charge of men and women in the Pentagon, their families, or any metric that you want to apply – record suicides, record divorces, record homeless and all the rest – as to but one consequence of taking the nation to war.

So I think talking about going to war with Iran in fairly specific terms should be carefully reviewed.  And that’s pretty dangerous talk.  It’s easy to get a nation into war; not so easy to get a nation out of war, as we are finding out.  I’m not sure that the American people are ready to go into a third war.

Second, if you subscribe to what Barbara [Slavin] has laid out – at least, what our taskforce has found – in particular, the internal dynamics that are occurring in Iran, then why in the world would you, as Barbara has noted, want to get in the way of that? ….

As the ambassador [Stuart Eizenstat] has noted, we are the mightiest military force on Earth.  The world has never seen such military power.  But that military power must always be tempered with a purpose.  And the military option is always on the table – of course it is – for any sovereign nation.  But at the same time we recognize that, that option is there.

The leaders of our country, the leaders of the world are not living in an “Alice in Wonderland” type of a world.  They are living in a real world and they have to make real decisions based on what they calculate to be the dynamics and the facts as they are today.  But probably more importantly, what they think they will be.  That’s leadership….

Jim Lobe, Inter Press Service:  How exactly does saying that all options are on the table help the U.S. case in human rights or anything else or even with respect to the nuclear program?

Hagel: Well, I would add this:  I’m not so sure it is necessary to continue to say all options are on the table.  I believe that the leadership in Iran, regardless of the five power centers that you’re referring to – whether it’s the ayatollah or the president or the Republican Guard, the commissions – have some pretty clear understanding of the reality of this issue and where we are.

I think the point that your question really brings out – which is a very good one.  If you were going to threaten on any kind of consistent basis, whether it’s from leadership or the Congress or the administration or anyone who generally speaks for this country in anyway, than you better be prepared to follow through with that.

I don’t think there’s anybody in Iran that does not question the seriousness of America, our allies or Israel on this for all the reasons we made very clear.  And I do think there does become a time when you start to minimize the legitimacy of a threat.  When you threaten people or you threaten sovereign nations, you better be very careful and you better understand, again, consequences because you may be required to employ that threat and activate that threat in some way.

So I don’t mind people always, as we have laid out, and I think every president and every administration, anybody of any consequence who’s talked about this can say – does say.  But I think it’s implied that the military threat is always there.  Stu made an important point about, there are a lot of ways to come at this.

But my point is, once you start that, you’d better be prepared to find 100,000 troops because it may take that or, eventually, where you’re going – my earlier point:  You don’t know.  And you can’t just – (audio break) – concept of, well, we’re going to do this but it’ll be marginalized, it’ll be a limited warfare.  I don’t think any nation can ever go into that way.  So that would be what I would just add to the rest of the other conversations.

Now here are the reports on the Israel lobby’s opposition. First Eli Lake at the Daily Beast:

Hagel’s real opposition will likely come from the pro-Israel lobby in Washington. While the American Israel Public Affairs Committee (AIPAC) never takes formal positions on nominees, if the group is asked by senators for its view on Hagel, it’s unlikely AIPAC will have a kind word.

A senior pro-Israel advocate in Washington told The Daily Beast on Thursday, “The pro-Israel community will view the nomination of Senator Chuck Hagel in an extremely negative light. His record is unique in its animus towards Israel.”

Josh Block, a former spokesman for AIPAC and the CEO and president of the Israel Project, told The Daily Beast, “While in the Senate, Hagel voted against designating the Iranian Revolutionary Guard Corps as a terrorist organization, refused to call on the E.U. to designate Hezbollah a terrorist group, and consistently voted against sanctions on Iran for their illicit pursuit of nuclear weapons capability. It is a matter of fact that his record on these issues puts him well outside the mainstream Democratic and Republican consensus.”

In the past, Hagel has even garnered opposition from pro-Israel Democrats who have defended Obama’s Israel record. Ira Forman, who was in charge of the Obama reelection campaign’s outreach to Jewish voters, said in 2009—after Hagel was named co-chairman of the President’s Foreign Intelligence Advisory Board—that he would have opposed Hagel’s nomination for a more substantive position.

Max Fisher at the Washington Post reviews other statements by Hagel over the years also demonstrating his reluctance to go to war with Iran.

Steve Walt at Foreign Policy looks forward to a donnybrook with the lobby over Hagel, so that Obama will grow a spine with Netanyahu and the lobby, or, alternatively, so that there will be less prevarication among journalists about the lobby’s power:

Hagel does have one political liability: Unlike almost all of his former colleagues on Capitol Hill, he hasn’t been a complete doormat for the Israel lobby. In the summer of 2006, for example, he incurred the lobby’s wrath by calling for a joint ceasefire during Israel’s war with Hezbollah. Pressed by the lobby, Bush & Co. rejected this advice and let the war drag on, even though prolonging it made Hezbollah more popular in Lebanon and cost additional Israeli lives. Hagel has also been outspoken in calling for the United States to be more evenhanded in its handling of the peace process, and he’s generally thought to be skeptical about the use of military force against Iran. Needless to say, such positions are anathema to Israel’s hard-line supporters, some of whom are already attacking Hagel’s suitability for SecDef. For the rest of us, however, Hagel’s views are not only sensible — they are in America and Israel’s best interest.

Having lost out on Susan Rice, Obama is unlikely to put forward a nominee he’s not willing to fight for or whom he thinks he might lose. So if Hagel is his pick to run the Pentagon, you can bet Obama will go to the mattresses for him. And what better way for Obama to pay back Benjamin Netanyahu for all the “cooperation” Obama received from him during the first term, as well as Bibi’s transparent attempt to tip the scale for Romney last fall?

For what it’s worth, I hope Obama nominates Hagel and that AIPAC and its allies go all-out to oppose him. If they lose, it might convince Obama to be less fearful of the lobby and encourage him to do what he thinks is best for the country (and incidentally, better for Israel) instead of toeing AIPAC’s line. But if the lobby takes Hagel down, it will provide even more evidence of its power, and the extent to which supine support for Israel has become a litmus test for high office in America.