“I am an Arab Woman of Color and We Come in all Shades of Anger. Beware.” 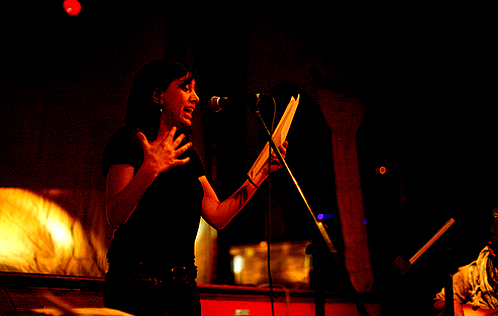 Within split seconds of hearing Rafeef Ziadah’s spoken words for the first time, I recognized I was witnessing an explosion, an exquisite exclusively Palestinian star. A spoken word artist of courage, strength, freedom and beauty. And inside of a week, I watched as ‘We teach life, sir’–performed on November 12th at the Tabernacle in London in an evening of political performance poetry with Remi Kanazi and Special Guests–go viral and soar to over 90,000 hits by today. Below Ziadah performs her anthem, ‘Shades of Anger’, on that same evening.

Listen to Rafeef Ziadah radio interview describing the inspiration for “my anthem,” Shades of Anger:

“We were at York University doing a creative action …a Zionist came by.. as I was lying on the floor he kicked me right in the gut really hard and said “You deserve to be raped before you have your terrorist children”, and that really stuck with me… The only way I could deal with it was to write back my poem and the poem is… I may be angry but what I’m going to produce is your next rebel and you won’t be able to stop us.

Rafeef Ziadah is a member of the steering committee of the Palestinian Campaign for the Academic and Cultural Boycott of Israel (PACBI), also a founding member of the Coalition Against Israeli Apartheid (CAIA) promoting the BDS campaign in the US, Canada, Australia, and New Zealand and an organizer of International Israeli Apartheid Week. Her debut CD Hadeel is dedicated to Palestinian youth.

One Response to “I am an Arab Woman of Color and We Come in all Shades of Anger. Beware.”