Hunger Strikes: The Tool of Resistance in Middle East 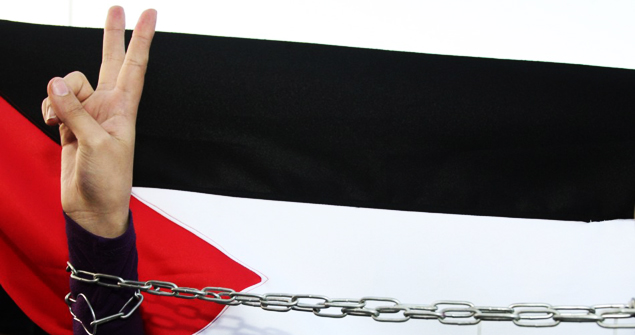 On 20 May, a symbolic 24-hour mass hunger strike began in Egypt to protest the continued detention of Egyptian activists in military prisons. The success of the recent Palestinian hunger strike garnered attention internationally and has inspired similar movements in other countries – a sign that non-violent resistance is taking hold in the Middle East as a tactic to push for justice and human rights.

In Egypt, activists estimate that 12,000 people have been prosecuted by the military since the fall of former President Hosni Mubarak in 2011. This number includes around 300 individuals who were detained in a recent round-up by Egyptian military police following a protest in early May outside the Ministry of Defence that was violently dispersed by the military.

Many people were injured and hundreds were arrested in the round-up and are scheduled to face trial in a military court. Thousands of those following the story demanded the detainees’ release. In response, detainees began an open-ended hunger strike.

Their calls were heard by at least 500 Egyptians and others across the Middle East, who joined them in a 24-hour hunger strike in solidarity with the detainees in the first region-wide non-violent hunger strike of its kind.

News of the Palestinians in Israeli jails refusing to eat in protest of administrative detention served as an inspiration, but the inspiration goes both ways. During the 24-hour solidarity hunger strike in Egypt, a number of Palestinian activists joined their Egyptian counterparts during the day by refraining from food, showing cooperation that is much needed in the region.

Individuals from Saudi Arabia and Lebanon, in addition to a large number of Egyptian expatriates, reported joining in the effort as well.

Egyptians decided to use this non-violent tactic against the military council, which has repeatedly promised to hand over power to a civilian government. While the goal of the strike was to see the prisoners released, it was also a form of direct action against what many see as the growing authoritarian power of the military.

Since the one-year anniversary of the revolution, many Egyptians and those in the international community have become concerned that violence has replaced the peaceful demonstrations that first characterised the Egyptian revolution. But non-violent actions like these reinforce the peaceful image of the 25 January revolution and show that non-violence still has traction in the Arab world.

In addition, it is a big step away from the violence that seems to be spreading across the country in the absence of security in the streets. Direct non-violent action is also more effective in inspiring change than demonstrations alone, which may have little long-term impact on the average person.

Some Egyptians have shown support for the military because they believe it can provide security. The longer the detainees’ strike goes on, however, the more the military loses sympathy from average people.

By using non-violent action such as a hunger strike, Egyptians are able to bring liberals and conservatives together around one cause – freeing prisoners – even though these groups might disagree on other political issues. This is the power of non-violence and why it can be a successful model of social change in Egypt today. In addition, this model can help shape Egypt’s future – a future in which we realise that we have more commonalities than divisions.

By refusing food, Arabs across the region have shown that Gandhi’s idea of direct non-violent action can improve our societies. We should look at this recent action as the beginning of a new era of protest based on a unified struggle for freedom.

Just as Gandhi marched to the sea to demonstrate his refusal to cooperate with the British colonial powers, Egyptians can refuse to participate in a system that puts their revolution, their demands and their future into the hands of a few, namely the military. In fact, non-cooperation of this nature may be Egypt’s greatest strength in battling for justice and freedom.

Manar Ammar is co-founder of Bikyamasr.com.

One Response to Hunger Strikes: The Tool of Resistance in Middle East