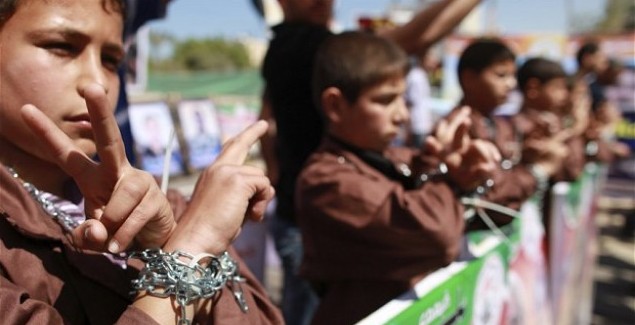 When Palestinian prisoner Khader Adnan went on a hunger strike last December he started a new chapter in the Palestinian non-violent movement, which ended successfully two weeks ago when Israel agreed to several of the key demands made by Palestinian prisoners. Adnan’s 66-day strike ended in February after Israeli authorities agreed to release him in April. It was followed by hundreds of other prisoners who also went on hunger strikes in multiple Israeli prisons in a step that proved that non-violent actions on a large scale can be more effective than violence.

Hana Shalabi, the second hunger striker, persuaded prison authorities to release and deport her to the Gaza Strip. Then came Bilal Diab and Thaer Halahleh, who went on strike for 76 days, breaking the earlier record of the Irish activist Bobby Sands, who died in a British prison after a hunger strike lasting 66 days.

In April, Diab and Halahleh were joined by some 1,600 Palestinian prisoners across Israel who fasted for 28 days, only ending their strike on 14 May once Israeli authorities made a fair compromise with their key demands, which included limitations on solitary confinement, the ability to study while in prison and visitation rights for prisoners from Gaza, including the right to physical contact with their families.

Open hunger strikes are among the peaceful popular resistance tools political prisoners use to demand the rights accorded to them by international conventions.

Once the strike was rolled out across the prisons it brought the hunger strikers’ cause to the attention of international circles, especially human rights organisations. Sit-ins in support of the striking prisoners were organised across campuses in Europe.

At the local level, including in the West Bank, Gaza Strip and inside Israel, the hunger strike found support from the Palestinian people, who pitched tents in city and village centres, and organised marches in support of the prisoners. Many of these marches headed for Ofer, one of the central prisons in the West Bank, where they were met with crowd dispersal measures like tear gas and rubber bullets, despite the fact that the demonstrators were completely peaceful.

The route of non-violence is an important one for the Palestinian leadership and its cause, building a Palestinian state. In the leadership’s view, the achievements of the Palestinian Authority’s state building project in bolstering the Palestinian economy and laying the infrastructure for the political institutions of a state would be harmed by a return to violence. Moreover, they understand that it would also damage the international public relations efforts that the Palestinians have been making in the past few years.

Other notable non-violent campaigns across the West Bank have also borne results. The village of Budrus, which struggled non-violently for years against plans to build the separation wall on its land, succeeded in influencing the Israeli authorities to change the route of the wall. Similar campaigns are taking place in other villages across the West Bank such as Ni’lin, Bil’in and Nabi Saleh.

The prisoners’ hunger strike, which unified prisoners from different political groups, has shown both the Palestinian people and the international community what can be achieved through a common cause using non-violence. Perhaps the most important lesson we can learn from the prisoners’ hunger strike is that a peaceful and non-violent struggle on a mass scale is arguably one of the most effective forms of resistance. It clearly demonstrated the need for an overall collective plan for the Palestinian people that would be acceptable to all parties and the need for the multiple factions within Palestinian society to work together to implement such a plan. It showed that the Palestinian people have to return to the streets and demand their right to a state through a non-violent popular struggle.

Jewish Israelis watching these developments should understand that these developments represent a profound shift within Palestinian society towards non-violence and see it as an opportunity. The non-violent struggle for a state of our own is a crucial step toward a two-state solution that will benefit both peoples.

Dawoud Abu Lebdeh is a Palestinian living in East Jerusalem. He is Project Manager at the Center for Democracy and Non-Violence and one of the founders of the Watan Student Movement at the Hebrew University in Jerusalem.

One Response to Hunger Strike Success: Victory for Non-Violence