Hunger for Freedom: It’s Time to Act on Khader Adnan 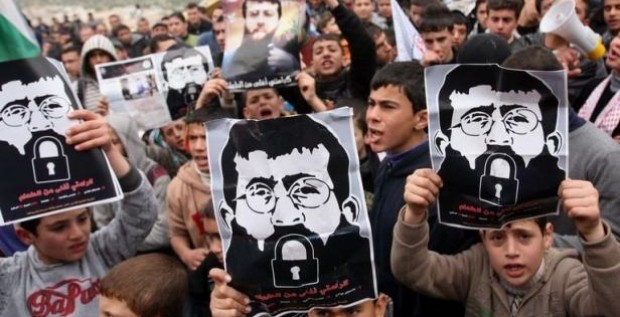 It is difficult to believe in freedom, justice and human rights without being touched, one way or another, by the plight of Khader Adnan, a Palestinian held under Administrative Detention in Israel.

Today, Khader Adnan enters day 63 of his hunger strike to protest his detention without charges or trial.

Khader Adnan was seized from his home south of Jenin on the West Bank on December 17, 2011 by Israeli military and security personnel. He is now in Israel’s Rebecca Ziv Hospital in Safed where he is chained to his bed.

Khader Adnan is 31 years old. He has rallied the hopes and aspirations of the Palestinian people and their supporters for rights, dignity and self-determination.

France’s Foreign Ministry yesterday (February 17) appealed to Israel for his release. It said:

Amnesty International has appealed to Israel to end the use of Administrative Detention and the release of Khader Adnan. It says:

Palestinian activist Khader Adnan has been on hunger strike since 18 December 2011 in protest against his detention by the Israeli authorities without charge or trial.

Khader Adnan started his hunger strike the day following his arrest from his home in the occupied West Bank to protest his ill-treatment by the Israel Security Agency (ISA).

On 10 January 2012 he was given a four-month administrative detention order signed by a military commander. It ends on 8 May but could be renewed indefinitely. Khader Adnan is now in a hospital in northern Israel. After more than 60 days on hunger strike, doctors warn that his life is in imminent danger. He is still under detention and is shackled to his hospital bed at all times and under constant armed guard.

Administrative detention is a procedure under which detainees are held without charge or trial for periods of up to six months, which can be renewed repeatedly. Under administrative detention, detainees’ rights to a fair trial as guaranteed by Article 14 of the International Covenant on Civil and Political Rights (ICCPR) are consistently violated.

Khader Adnan is one of 309 Palestinians currently held in administrative detention by the Israeli authorities, including one man held for over five years and 24 Palestinian Legislative Council members. Hundreds of other Palestinian detainees and prisoners have joined Khader Adnan’s hunger strike.

Support Palestinian activist Khader Adnan’s protest for respect for the human rights of Palestinians in Israeli detention. Call on the Israeli Minister of Defense to:

You can take action by signing Amnesty International’s petition. Some 472,893 people around the world have already done so, and you can too. The family and friends of Khader Adnan have set up a blog to send messages of support to his wife Randa and his family. The letters from all over the world are poignant and share a love for freedom, justice and human rights.

Among these messages of support was one by British-American veteran journalist, writer and researcher Helena Cobban from Washington, DC. She writes:

To Khader Adnan and his beloved family,

I can barely imagine the pain all of you are going through, and the determination and depth of faith that have brought you to this point. I am sure you are well aware of the historic role that hunger strikes have played in many freedom struggles– through Gandhi, South Africa, the Irish struggle… and of course, very frequently indeed in your own beloved Palestine.

I am among a number of people here in the United States– not enough of us, but our number is now growing– who have protested Israel’s inhumane and unjust system of administrative detention for many years. I grew up in Britain, so I am well aware of the role that the British Mandate administration played in putting some of those (il-)legal provisions into place in Palestine in the first place; and I also know well the way that U.S. government power has shielded Israel from any accountability under international law throughout the past 45 years.

It is quite unacceptable to any humane conscience that the Palestinian people of the West Bank and Gaza have had to live under foreign military occupation for 45 years. Under international law, foreign military occupation was only ever envisaged to be a temporary situation! But here you are, chafing under a military rule, and one run by foreign occupiers who daily steal your land and resources and stunt the lives and dignity of all your people… for 45 years, with no quick end in sight.

After all the talk about ‘peace processes’ and the like, it seems clear to me that we in the west who profess to stand for “human rights” around the world need to refocus our attention, regarding Palestine, on the basic and clear issues of human rights for all the people there. Your very brave action– risking your own survival– shines an inescapable light on the abuses of the occupation regime. I wish survival, comfort, and strength to all of you. But beyond that, I wish self-determination and the assurance of the lasting protection of your rights and dignity to you and all the Palestinian people.

One Response to Hunger for Freedom: It’s Time to Act on Khader Adnan