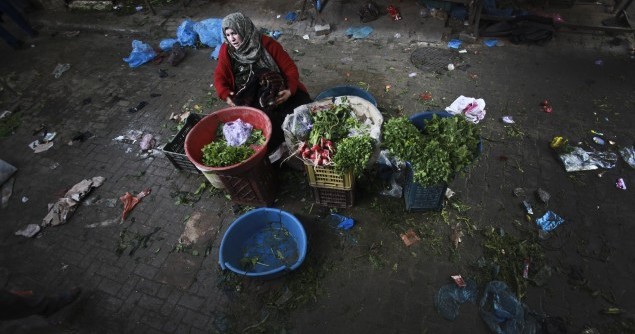 Six and a half years go, shortly after Hamas won the Palestinian national elections and took charge of Gaza, a senior Israeli official described Israel’s planned response. “The idea,” he said, “is to put the Palestinians on a diet, but not to make them die of hunger.”

Although Dov Weisglass was adviser to Ehud Olmert, the prime minister of the day, few observers treated his comment as more than hyperbole, a supposedly droll characterisation of the blockade Israel was about to impose on the tiny enclave.

Last week, however, the evidence finally emerged to prove that this did indeed become Israeli policy. After a three-year legal battle by an Israeli human rights group, Israel was forced to disclose its so-called “Red Lines” document. Drafted in early 2008, as the blockade was tightened still further, the defence ministry paper set forth proposals on how to treat Hamas-ruled Gaza.

Health officials provided calculations of the minimum number of calories needed by Gaza’s 1.5 million inhabitants to avoid malnutrition. Those figures were then translated into truckloads of food Israel was supposed to allow in each day.

The Israeli media have tried to present these chilling discussions, held in secret, in the best light possible. Even the liberal Haaretz newspaper euphemistically described this extreme form of calorie-counting as designed to “make sure Gaza didn’t starve”.

But a rather different picture emerges as one reads the small print. While the health ministry determined that Gazans needed daily an average of 2,279 calories each to avoid malnutrition – requiring 170 trucks a day – military officials then found a host of pretexts to whittle down the trucks to a fraction of the original figure.

The reality was that, in this period, an average of only 67 trucks – much less than half of the minimum requirement – entered Gaza daily. This compared to more than 400 trucks before the blockade began.

To achieve this large reduction, officials deducted trucks based both on an over-generous assessment of how much food could be grown locally and on differences in the ”culture and experience” of food consumption in Gaza, a rationale never explained.

Gisha, the organisation that fought for the document’s publication, observes that Israeli officials ignored the fact that the blockade had severely impaired Gaza’s farming industry, with a shortage of seeds and chickens that had led to a dramatic drop in food output.

UN staff too have noted that Israel failed to factor in the large quantity of food from each day’s supply of 67 trucks that never actually reached Gaza. That was because Israeli restrictions at the crossings created long delays as food was unloaded, checked and then put on to new trucks. Many items spoiled as they lay in the sun.

And on top of this, Israel further adjusted the formula so that the number of trucks carrying nutrient-poor sugar were doubled while the trucks carrying milk, fruit and vegetables were greatly reduced, sometimes by as much as a half.

Robert Turner, director of the UN refugee agency’s operations in the Gaza Strip, has observed: “The facts on the ground in Gaza demonstrate that food imports consistently fell below the red lines.”

It does not need an expert to conclude that the imposition of this Weisglass-style “diet” would entail widespread malnutrition, especially among children. And that is precisely what happened, as a leaked report from the International Committee of the Red Cross found at the time. “Chronic malnutrition is on a steadily rising trend and micro-nutrient deficiencies are of great concern,” it reported in early 2008.

Israel’s protests that the document was merely a “rough draft” and never implemented are barely credible – and, anyway, beside the point. If the politicians and generals were advised by health experts that Gaza needed at least 170 trucks a day, why did they oversee a policy that allowed in only 67?

There can be no doubt that the diet devised for Gaza – much like Israel’s blockade in general – was intended as a form of collective punishment, one directed at every man, woman and child. The goal, according to the Israeli defence ministry, was to wage “economic warfare” that would generate a political crisis, leading to a popular uprising against Hamas.

Earlier, when Israel carried out its 2005 disengagement, it presented the withdrawal as marking the end of Gaza’s occupation. But the “Red Lines” formula indicates quite the opposite: that, in reality, Israeli officials intensified their control, managing the lives of Gaza’s inhabitants in almost-microscopic detail.

Who can doubt – given the experiences of Gaza over the past few years – that there exist in the Israeli military’s archives other, still-classified documents setting out similar experiments in social engineering? Will future historians reveal that Israeli officials also pondered the fewest hours of electricity Gazans needed to survive, or the minimum amount of water, or the smallest living space per family, or the highest feasible levels of unemployment?

Such formulas presumably lay behind:

It is precisely these policies by Israel that led the United Nations to warn in August that Gaza would be “uninhabitable” by 2020.

In fact, the rationale for the Red Lines document and these other measures can be found in a military strategy that found its apotheosis in Operation Cast Lead, the savage attack on Gaza in winter 2008-09.

The Dahiya doctrine was Israel’s attempt to update its traditional military deterrence principle to cope with a changing Middle East, one in which the main challenge it faced was from asymmetrical warfare. The name Dahiya derives from a neighbourhood of Beirut Israel levelled in its 2006 attack on Lebanon.

This “security concept”, as the Israeli army termed it, involves the wholesale destruction of a community’s infrastructure to immerse it so deeply in the problems of survival and reconstruction that other concerns, including fighting back or resisting occupation, are no longer practicable.

On the first day of the Gaza offensive, Yoav Galant, the commander in charge, explained the aim succinctly: it was to “send Gaza decades into the past”. Matan Vilnai may have been thinking in similar terms when, months before Operation Cast Lead, he warned that Israel was preparing to inflict on Gaza a “shoah”, the Hebrew word for Holocaust.

Seen in this context, Weisglass’ diet can be understood as just one more refinement of the Dahiya doctrine: a whole society refashioned to accept its subjugation through a combination of violence, poverty, malnutrition and a permanent struggle over limited resources.

This experiment in the manufacture of Palestinian despair is, it goes with saying, both illegal and grossly immoral. But ultimately it also certain to unravel – and possibly sooner rather than later. The visit this week of Qatar’s emir, there to bestow hundreds of millions of dollars in aid, was the first by a head of state since 1999.

The Gulf’s wealthy oil states need influence, allies and an improved image in a new Middle East wracked by uprisings and civil war. Gaza is a prize, it seems, they may be willing to challenge Israel to possess.