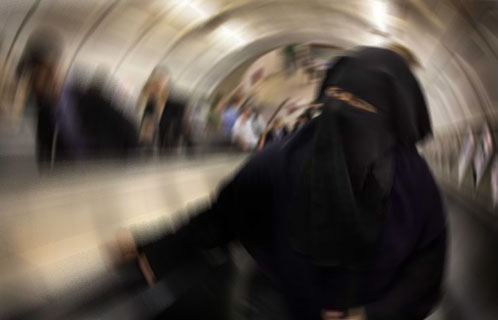 The ban in France of the niqab, the full face covering worn by some Muslim women, has raised much debate over the past week.

Opponents of France’s move say it transgresses on personal and religious freedoms.

There is no shortage of commentary in media condemning the French move. Perhaps an alien creature arriving from space and witnessing the current debate would think that France has banned the hijab, the code of dress most Islamic religious scholars concur is compulsory for Muslim women. I say most because not all do. For example, Gamal al-Banna, brother of the founder of the Muslim Brotherhood, Hasan al-Banna, contends that the hijab requirement for women has been misinterpreted and has been unjustly imposed upon Muslim women. That is a debate I leave to the men of religion.

And yet, I think it’s only fair to view the issue of France’s ban of the niqab from another perspective, from the opposite angle. But before that it should be important to note that the niqab predates Islam and is not an exclusively Islamic practice. Indeed, the four main (Sunni) Islamic schools; Hanbali, Hanafi, Shafi’i and Maliki, all concur that a woman’s face and hands need not be covered.

The question I wish like to pose is: would the Islamic world be willing to preserve and enforce the right to personal and cultural freedoms at home? And since the interpretation of religious edicts is in itself open to interpretation, why can sovereign states like Saudi Arabia and Iran, that enforce a dress code on women, resort to religion to force the veil upon women who do not wish to be veiled while another sovereign state, France, cannot enforce its own dress code?

I’ll tell you why. Because what has been left unsaid is that France as a democratic country is seen as acting in contravention to the principles of the state. So are Muslims, in this case, willing to concede that Iran and Saudi Arabia are undemocratic?

Ultimately, it is important to note that France’s niqab-banning law is the result of a democratic process which was passed in parliament and not an edict announced by the President or stipulated by a religious authority.

Does the niqab ban signal an assault on religious freedoms and a gradual erosion of liberties? It is for today’s French society to determine the safeguards of its revolutionary origins; liberty, equality, fraternity.

The niqab is only worn by a very small minority of Muslim women who choose to be, or are expected to be, veiled. It is highly debatable whether the niqab is even an Islamic requirement or not, hence the very small number of women who wear it.

To twist the debate and turn into an anti-Islamic issue will be playing into the hands of extremists like bin Laden, misguided hardliners of the ilk of Terry Jones and despots such as the erratic Muammar al-Gaddafi.

It would be prudent to recall the Swiss referendum that led to the ban on building any new minarets in the country. The ban’s critics included the Swiss Bishops Conference which expressed the opinion that it should be rejected “based on our Christian values and the democratic principles of our country”.

Contrast this with the dishonest and intentionally misleading pronouncement of Gaddafi who claimed that Switzerland was an “infidel, obscene country that is destroying mosques”.

The reason behind Gaddafi’s rage was not his worry about the well-being of Islam in Switzerland. Rather, it was his unforgiving fury at the Swiss for arresting in 2008 his errant son Hannibal. It transpires that Hannibal beat up two of his staff at a hotel in Geneva. The elder Gaddafi promptly withdrew over $5 billion from Swiss bank accounts, cut oil supplies to Switzerland and detained on trumped up charges two Swiss businessmen working in Libya.

That Hannibal had a history of run-ins with law enforcement in Europe did not seem to bother the Brother Leader. Beating up helpless, even pregnant, women didn’t worry Muammar al-Gaddafi nor did it seem un-Islamic to him. The Swiss finally succumbed and pathetically apologized for arresting Gaddafi’s law-breaking son.

Unfortunately there was not a single critical voice from the Islamic world voicing displeasure over Gaddafi’s duplicity. I point this out because inevitably the guise of a religious issue is used to divert attention from the matter at hand.

Muslims continue to thrive in France and the West. They are among the fastest growing minorities. Their religious rights are respected and enshrined in laws and constitutions, constitutions drawn up not through religious processes but the efforts and intellect of wise men who intentionally separated Church from state and sought to create more just societies.

It is a real shame when women’s issues in Islamic societies and beyond are judged according to a dress code; when a woman’s worth is based on her perceived modesty or lack of instead of the value of her contribution to society.

So as various commentaries continue to scream abuse at the niqab ban in France, I hope people in the Arab and Islamic worlds remember, and remind the West while they’re at it, that Islam’s great empires, at their apex, in general embraced minorities and were a refuge for the oppressed and persecuted, at a time when Western cultures had scant regard or respect for their own minorities. This should be a model for today’s Muslims who must include minorities (ethnic and religious) and non-immigrants (laborers and housemaids in the midst of Islamic societies, in their quest for justice.

Western legacies left a host of problems in this region and among its peoples. But playing the victim, engendering sympathy and hurling accusations of conspiracy, persecution and discrimination will only get a cause so far. Adopting a positive, constructive approach with a benevolent face and heart, on the other hand, is much more advisable.