‘High on Victory’: Saudi Conservatives on the March 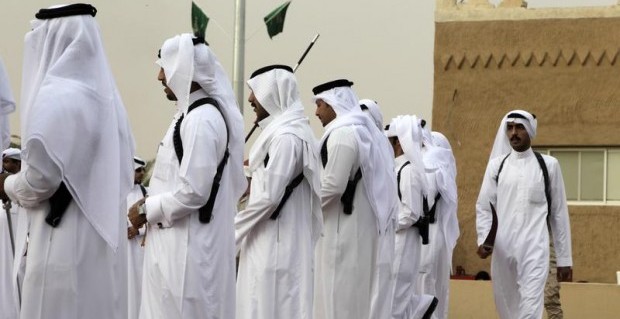 High on what they seem to think is a victory in the Hamza Kashgari affair, religious conservatives opened another front by sending some of their young followers to protest against music, dancing and the mixing of men and women in the National Heritage and Culture Festival aka Janadriyah.

It all began when Sheikh Saleh al-Lihedan, former head of the judiciary, said that women should not visit Janadriyah. “My advice to anyone is to dignify their women, their wife, their mother, or anyone under his guardianship by not allowing them to go” to such events, he said.

Few days later, dozens of these religious conservatives, usually called “Mohtasbeen” headed to Janadriyah, where they clashed with security forces there. Few of them have been briefly detained. The incident was repeated the next day, and few other people were arrested as well.

Now some might think that those mohtasbeen are part of the Commission of Promotion of Virtue and Prevention of Vice (CPVPV) aka Muttaween or the Religious Police, but that’s not the case. This group, most of them young men in their late teens and early twenties, act as some sort of unofficial muttawaeen who find things like music, dancing and gender mixing objectionable and believe they have the right to attempt to prevent such things.

I thought the story ended after the two scuffles on Wednesday and Thursday, but I was wrong. Yesterday, members of the official CPVPV squad in Janadriyah wrote a letter to their boss announcing they would go on strike until their demands are addressed. What are their demands?

Ballsy move there, no doubt. It is not everyday that government employees in Saudi Arabia threaten to go on strike. At the end of the letter, they said they were doing this because without addressing their demands they would no longer be able to do their job in a manner that is satisfactory to God first, and to their superiors second. See, these guys are not doing this for the money. They do it because they seek reward from God.

After meetings between CPVPV officials and organizers of Janadriyah, it was decided that starting today and until the end of the festival music will be stopped and the number of CPVPV squad in Janadriyah will be increased to 100. Another small victory for the conservatives.

However, this was not enough for them. Today, a group of 50 clerics led by Abdul-Rahman al-Barrak and Nasser al-Omar released a statement calling on the government to cancel Janadriyah and the upcoming book fair because they “include many violations of Sharia.”

What does it all mean?

I’m not quite sure, but it seems that the tide of the conservative wave that I wrote about last month keeps on rising, and that there are groups and individuals who want to take advantage of this to sweep everyone and everything in their way.

Just a quick update on the Hamza Kashgari case since many people have been asking: The young man is now in detention, his family visited him and he is reportedly in high spirits and being treated respectfully. Several sites and petitions have been set up to support him and call for his release.

Prominent human rights lawyer Abdul-Rahman al-Lahem has announced that he will defend Kashgari, arguing that he will push for this case to be handled by a committee in the information ministry instead of a Sharia court.

Meanwhile, several people on the right are claiming that Hamza is a member what they believe is a “sleeping cell” to spread atheism among Saudi youth. Al-Hayat has a thinly sourced story saying public prosecutors are likely to summon people that supported or agreed with Kashgari, which opened the door widely for something like a witch hunt.

People like Mohammed al-Hodaif are accusing Abdullah Hamidaddin of being the cell leader but so far they have failed to provide a strong evidence to support their claims.The two men faced off on TV today where al-Hodaif threatened Hamidaddin, who is currently traveling to the US, to return to the Kingdom for a trial in a Saudi court.

3 Responses to ‘High on Victory’: Saudi Conservatives on the March