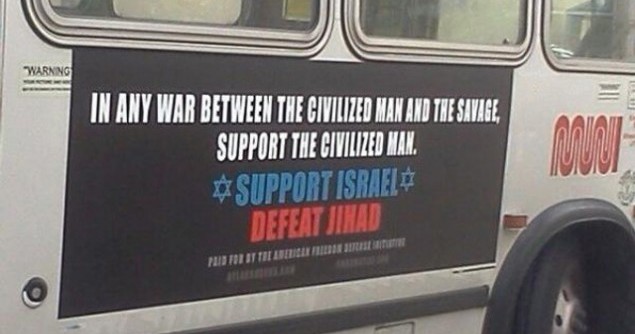 For the last three months an anti Muslim advertisement campaign is appearing in metro/train stations in San Francisco, New York City and Washington, DC. Refreshingly these ads are prompting a wave of constructive counter activities by faith and non-faith groups and a host of creative responses from average Americans.

American Freedom Defense Initiative (AFDI) is the funder and sponsor of these virulently anti Muslim ads. AFDI and its executive director Pamela Geller are both cited by the Anti-Defamation League and the Southern Poverty Law Center for their Islamophobic (anti- Muslim) activities. Their ads read “In Any War Between the Civilized Man and the Savage, Support the Civilized Man. Support Israel. Defeat Jihad.” with a Star of David on either side of the phrases- depicting Islam and Muslims as savages.

These hateful ads employ highly charged racist expressions that reflect a period in American history that none today think kindly of. The word “savage” is a loaded stereotypical and denigrating term that was once used to describe African Americans, Native Americans and other ethnic minority groups as mentally inferior, culturally primitive, with physical animal like attributes. Since 9/11 Geller, AFDI and a handful of Islamophobic pundits and funders have methodically spun similar humiliating images of Muslims while spreading misinformation and fear of  Islam to negatively influence and shape American views of Muslims and their faith.

It is not surprising the AFDI ads use demeaning stereotypes that rely on negative seminal coded images to maliciously portray Muslims. AFDI and Geller have systematically proposed metaphors that conjure degrading unflattering simplistic beliefs of American Muslims and Islam. While there is no denying that Muslims are like other faiths and secular communities with their share of lunatic extreme fanatics. But the numbers of  Muslim loonies is no more or less then those represented among other faiths or the larger community. Willfully, AFDI and their ilk choose to selectively utilize deformed negative images of Muslims to carefully weave and structure abhorrent superficial stereotypes that distort and smear all Muslims.

While the ads are antagonistic towards Islam and Muslims their purpose is even more provocative. On October 4th during a public hearing in the US District Court, AFDI’s lawyer Robert Muise admitted that the intent of these vile ads is to engender American support for Israel. He confirmed that these ads deliberately stroke Islamophobic sentiments to advance the interests and policies of the Israeli government. Muise implicitly acknowledged that AFDI’s objective is to couple the hate of Islam and Muslims with the love of Israel. Which is clearly upsetting to both American Muslims and Jews and is highly insulting to the sensibilities of conscience Americans.

Clearly AFDI’s ad messaging is meant to rouse hate of American Muslims and Islam by driving a wedge between American Muslims and Jewish Americans. They are also understood as a tool to advance a political ideology with counter productive consequences to US declared policy and interest in advancing peace among Palestinians and Israelis. More critically these ads attempt to thwart and color American church divestment initiatives from US companies operating and profiting from Israel’s illegal settlement enterprise; and seek to slow the growing movement that questions US unconditional military aid to Israel.

Recognizing the blatant malice these ads inflict on American Muslims and their off-putting message that is equally offensive to progressive American supporters of Israel, an interesting and meaningful organic chorus of counter responses began to unfold. In every city these repulsive ads have appeared, disparate groups and individuals banded together to challenge AFDI’s objectionable foul assertions. Tired of fear mongering and divisiveness many Americans are rejecting the ads- mind you the ads still resonate with fundamental Christian Zionists and radical neo-con conservative Americans who feed and profit from spreading hate.

The AFDI ad campaign spurred several groups including Rabbis for Human Rights – North America, Sojourners, and the United Methodist Women to place counter ads in the same stations where the anti Muslim ads appear. On Monday October 8th without coordination several ad campaigns that speak of tolerance and respect were unveiled. The counter ads were mounted side by side or in the same vicinity the AFDI ads are placed. They contained three constructive massages and one congenial theme- “Hate speech is not civilized. Support peace in word and deed.” Another reads “Help stop bigotry against our Muslim neighbors. Love your Muslim neighbors.” And my favorite “In the choice between love and hate, choose love.”

Clearly the aim of AFDI’s maligning ads is to provoke an emotional reaction- preferably by one or two lone American Muslims to fulfill AFDI supporters and Geller’s sinister claims. So far these hostile ads have failed to incite the violent response AFDI and their funders desire. Instead Muslim, Jewish, Christian and interfaith community leaders responded by exercising their Constitutional right to peacefully condemn AFDI’s repugnant message while meaningfully engaging their community with counter positive messaging. They evoked our shared cherished American values that call for respect of ethnic and religious diversity, civility and communal harmony.

These good will efforts cracked a small opening to push back the Islamophobic loathing rhetoric credited as the most dominant force of ill in the US since 9/11. For more than a decade a handful of pundits and their supporters spread and mainstreamed their defiling and divisive message littering our public discourse while inflicting much harm on American Muslims and our regional and geopolitical interests abroad.

So while these ads are insulting and horrific they brought the best of our faith and non-faith communities. Reaction to these heinous ads sprung like the lotus, whose root in mud and filth rises through muck, and dark polluted murky water, to blossom clean, pure white petals. Representatives of every faith and creed rose to dispel hostility and hate by restoring moral rationality. Collectively they understood that compassion, respect, love, and empathy are the only means to protect the moral and ethical compass of their communities and society.

Weary of the few hateful peddlers who for so long have pitted one group of Americans against another to advance their narrow political agenda, principled Americans united together to combat AFDI’s redundant hateful message with love and a promise of a new dawn. Thanks to Geller and AFDI their poisonous ads- unwittingly helped inspire a moral awakening and a budding hope that the painful Islamophobic trend may have run its course.