Hate Ad Spray Can Protest: ‘It’s All About Mona’ 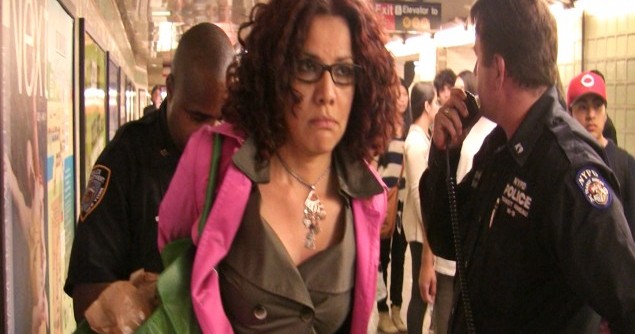 There is a fine line between an activist and a donkey’s hindquarters, and that line got thinner when I viewed a video clip of an American Muslim activist exercising her right of self-expression.

Frankly, there are not enough Muslims willing to stand up to the growing tide of Islamophobia, the vandalism against mosques and abuse heaped on women who wear the hijab. So, it’s refreshing to see someone take such a public stand against a group that buys advertising to vilify Muslims. But when activism become self-aggrandizement the battle against bigotry becomes a lost cause.

The case in point involves a well-known hate group that bought billboards from the Metropolitan Transportation Authority in New York City. The ad reads, “In any war between the civilized man and the savage, support the civilized man. Support Israel. Defeat jihad.”

It wasn’t as if the MTA went along with the billboards. The agency refused to post the ads, citing its regulations that allow it to reject advertising that “demean an individual or group of individuals on account of race, color, religion, national origin, ancestry, gender, age, disability or sexual orientation.”

The haters sued in federal court, which ruled that rejecting the ads was a violation of free speech. MTA had no choice but to run the ads.

People are understandably angry to be singled out as savages. Its Orientalist implications and the simplistic and misleading interpretation of jihad without consideration to Muslims’ multiple definitions of the word is bigotry plain and simple. It didn’t take long for commuters to plaster the billboards with “racist” and “hate” stickers. Yet that wasn’t enough for the Egyptian-born, Saudi-raised New York Muslim activist who felt the need to inject more drama.

She announced to her 164,000 Twitter followers that she’d be in the subway with a can of spray paint to deface the ads. With a video crew and New York Post reporter in tow, she began her assault on the billboard. Coincidentally, or perhaps not, a supporter of the hate group responsible for the billboards showed up. In what was the most awkward confrontation between the two people since the Kennedy-Nixon debates, a push-pull-grab-spray-paint dance ensued. It should have been a video record of a non-violent exercise of free speech countering hate, but it looked more like a 15-year-old high school girl spray painting a rival’s locker.

Thankfully, the police arrived. They ended this piece of performance art by arresting the activist, who put on a pouty face before being hauled off to the pokey on a vandalism charge.

I couldn’t decide whether this person was a fearless fighter to raise Muslim voices or someone who sought to become the Rosa Parks of the Ummah and sadly overreached.

Civil disobedience is a rich tradition in the United States. Without it, worker protection laws and ending racial segregation would have taken decades longer. Perhaps the anti-war demonstrations didn’t hasten the end of the Vietnam War, but it certainly raised the social conscience of a nation emerging from the torpid 1950s.

In the age of cynical social media, maybe it’s entirely appropriate to bring a video crew to record one’s act of civil disobedience. To me, though, the activist just got in the way of her message. Instead of raising Americans’ awareness of bigotry, the incident was all about her.

I wouldn’t begrudge her if this was single moment of YouTube/Twitter fame, but she behaved similarly in Cairo when police broke her arms and arrested her in Tahrir Square. It certainly was a horrific experience for her, but she admitted later her first thought was to post the experience with a photo of her broken arms on Twitter. What happened to the protesters she left behind in Tahrir Square after her posts is anybody’s guess.

Malcolm X was a steely revolutionary who used the camera to deliver his message, both as a black nationalist and later as he softened his views on a non-violent civil rights movement. Even when he was under constant death threats, it was never about him, but the safety of his family. Martin Luther King Jr. knew how to play the media but he never lost sight of his mission.

But once the messenger supplants the message, drawing attention to one’s self instead of the cause, the credibility of the cause suffers. Instead of focusing on the billboard and the pain people feel when they are described as “savages” we get a cringe-worthy video of a scuffle over pink spray paint and shouts of First Amendment rights. The activist left her dignity at home and gave ammunition to the haters. They paid for the ad and the law upheld their right to post it. They used the system to their advantage. The activist could have recruited like-minded Muslims to stage a protest or at least a news conference to explain what it means to be called a savage.

Within days of the subway scuffle, the MTA approved a new set of guidelines that prohibits advertisements that the agency “reasonably foresees would imminently incite or provoke violence or other immediate breach of the peace.”

It appears that spray paint incident worked in the short term, but this kind of public attention isn’t likely to work in the long haul and only lead to making Muslims fodder for parodies.

2 Responses to Hate Ad Spray Can Protest: ‘It’s All About Mona’