Google and Ghonim: The Horns of a Dilemma 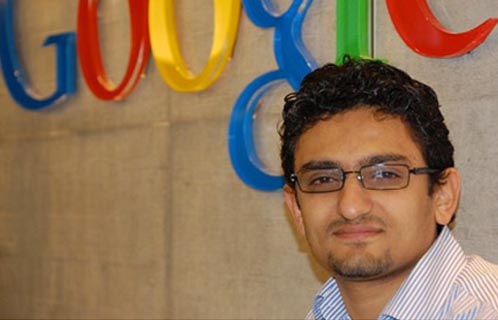 Egypt has a hero, albeit a reluctant one, in the shape of Wael Ghonim, the young activist behind the ‘We are all Khaled Said‘ Facebook page. Imprisoned in a blindfold for twelve days, his release apparently brokered by Egyptian businessman Naguib Suweiris, Ghonim is now free and his first words to media were eagerly picked up and relayed around the world – his bravery and resolution were inspirational and are being widely credited with reinvigorating protests yesterday.

The media, as media does, scrambled for details on this new hero. Until his disappearance, Ghonim was an anonymous figure outside a small circle of activists organising the growing protest movement using online tools – although his Facebook page reached over 50,000 people. Luckily, he is a marketing manager at Google, so his official Google piccie was quickly procured and everyone had a nice, clear image of Ghonim. In front of a Google logo. The media also had a nice, snappy explanation of who Ghonim was. He was a ‘Google Executive’.

‘Google Executive’ is brilliant. It’s a neat, two-word characterisation that gives the guy some weight, some background, gives us a sense of just who this guy is. Together with the photo, it also neatly ties this young revolutionary activist who was at least partly responsible for bringing Egypt out onto the street and its government to its knees, to Google. Dubai newspaper Seven Days went even further today, with its splash screaming ‘Google Chief Slams Traitor Claims’. ‘Google Chief’ reads so much better than ‘young activist’, does it not?

Google must be torn. On the one hand, there’s little doubt that Larry Page, Sergei Brin and many others over at Goog Mansions would privately support and applaud the freedom of expression, activism and hope that Ghonim undoubtedly represents, let alone his courage. But on the other hand, this is a young man whose actions have helped threaten to bring down a government. His strong association with Google, which does business with, and increasingly depends on the support of, governments (some of which have much in common with that in Egypt), must be giving Google a great deal of pause for thought. It opens Google to the possible implication of involvement in all of this, if only  implicit involvement – surely, critics would aver, a company with the technological resources of Google would know what was going on here. The charge is bunkum, but that rarely stops charges being laid. And Ghonim must have been getting up to at least some of this stuff on company time, surely?

Yet Google can’t sack Ghonim. The outcry around the world as this company that stands for the values of freedom and choice sacks a hero would be enormous. Can it champion him? Not without ensuring virtually every government in the world is deeply suspicious about the company, its motives and its staff. All governments, as Wikileaks has taught us, have something to be ashamed of. The best outcome for the corporate people at Google would probably be a quiet resignation and a few public words thanking Google and exonerating it of involvement.

One Response to Google and Ghonim: The Horns of a Dilemma