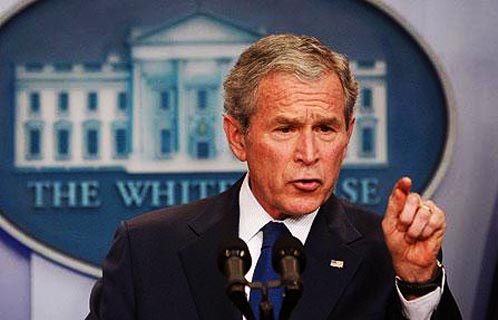 The people of Egypt have toppled their dictator, which surely ranks among the most remarkable and wonderful human achievements in memory. However, every significant event is an occasion for idiotic and offensive commentary, and this has been no exception. Prominent members of the neo-con community have declared that the Egyptian people should acknowledge a debt of gratitude owed to … George W. Bush.

Yes, it seems that Egyptians were only fulfilling the wise prophecy made by that visionary more than seven years earlier. Of course, these same neo-cons previously operated as though poverty, corruption and tyranny for 80 million people was a small price to pay for their tormentor’s loyalty to Western “values.” Now they claim it is their progressive philosophy that deserves credit. Take Elliott Abrams, whose avoidance of a well-deserved lengthy prison sentence would have been far more tolerable had he not remained a high-profile commentator and Bush Administration official. Here’s what Abrams had to say during the demonstrations:

In November 2003, President George W. Bush laid out this question: “Are the peoples of the Middle East somehow beyond the reach of liberty? Are millions of men and women and children condemned by history or culture to live in despotism? Are they alone never to know freedom and never even to have a choice in the matter?” The massive and violent demonstrations underway in Egypt, the smaller ones in Jordan and Yemen, and the recent revolt in Tunisia that inspired those events, have affirmed that the answer is no and are exploding, once and for all, the myth of Arab exceptionalism. Arab nations, too, yearn to throw off the secret police, to read a newspaper that the Ministry of Information has not censored and to vote in free elections.

Here’s what Abrams doesn’t say. Bush delivered this speech in November, 2003, about eight months after the US-led invasion of Iraq by the coalition of the bullied and bought. It already was quite clear that the WMD’s we had been promised were not going to surface. Having lost their casus belli, Bush & co. were scrambling for a replacement, and the cause of Arab democracy was tried on for size: “Sure, we thought Saddam had WMD’s, but even if we were honestly mistaken, we toppled an evil dictator who was oppressing 25 million people.”

Those who opposed the war were excoriated for their love of Saddam and insensitivity to freedom for the peoples of the Middle East. The anti-war crowd was portrayed as quasi-racists who thought Arabs were not equipped to function under democracy, when their real position was that the U.S. could not successfully impose “democracy” by bombing, invasion and occupation. Bush faced a small dilemma in extolling the virtues of Arab democracy. He did not want to offend the tyrannical Arab regimes that were recipients of lavish financial and/or diplomatic support from the U.S., including Egypt and the Bush family favorite, Saudi Arabia. Problem solved! With a wink and a nod to his Arab allies, Bush signaled that he was not really serious about spreading the dangerous notion of democracy throughout the region. According to the Washington Post:

[Bush]praised the governments of Egypt, which said “should show the way toward democracy in the Middle East,” and Saudi Arabia, which he said is “taking first steps toward reform, including a plan for gradual introduction of elections.”

Yes, that is the same article discussing the same speech that was linked by Abrams as support for his thesis of Bush as visionary prophet. Abrams actually exalted his former employer as a guiding light of Egyptian democracy based upon a speech in which Bush praised Egypt’s dictatorship as a role model.