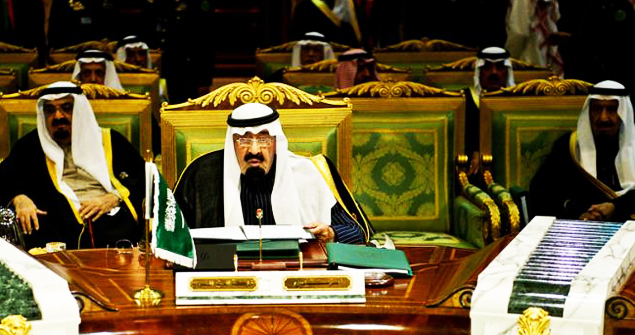 The Gulf Cooperation Council (GCC) has not been very successful in developing close institutional and operational links between the governments of its six member states. Frustration with this inertia (combined with alarm at the security situation in Bahrain) has led Saudi Arabia to promote the concept of revitalising the GCC into a political union.

The proposal was the main topic at this week’s GCC summit when the leaders reviewed the idea. The host nation and chief proponent of the idea of a union, Saudi Arabia, was in the chair, but it recognised the doubts about political union raised by other GCC states, when Saudi Foreign Minister Saud Al Faisal announced at the end of the summit that the GCC nations needed more time to finetune plans for a possible union.

There are several challenges to this idea of a union, not least that the details have not been made clear. Newly appointed Bahraini Information Minister Samira Rajab said that the Gulf union would be similar to the European Union, but such an imaginative claim ignores the decades of political commitment from generations of European politicians to the idea of closer union, which is the only way such a structure can work. And in Europe’s case it is still struggling to find its way.

The lack of clarity on the proposals was summed up by Dr Mohammad Bin Howaidin, professor of political science at the UAE University, when he spoke to UAE newspaper, Gulf News, in March. “We need clear answers to questions such as why this union is to be created. Is it prompted by a security development? Will Kuwaitis, who are more liberal politically, integrate with other less liberal members?

“Is the UAE, one of the most culturally tolerant and open countries in the region, prepared to integrate with another conservative country such as Saudi Arabia? And what form of integration schemes are we after, is it a single state, a federation like the UAE, or a confederation like the EU?”

There is no doubt that the governments of Saudi Arabia and Bahrain are keen on the idea. The present unrest in Bahrain has forced its leadership to develop closer links with Saudi Arabia, which has provided troops to support the government.

However, the Saudi foreign minister insisted this week that the proposed union should be for all GCC members, and not just for two (referring to Bahrain and Saudi Arabia).

Speaking in March, Al Faisal emphasised a more practical angle on the proposed union, implying that the proposal was not about political control, and more about re-invigorating the GCC. He said that the union would make the GCC more efficient and would strengthen cooperation in different fields including the political, security, military and economic affairs.

Al Faisal stressed that the proposal would not affect the sovereignty of any member country, and said it will have positive impact on the all members. “The union … will not be used as a medium to interfere in their internal affairs. It aims at formulating effective bodies enjoying flexibility and speed and the ability to execute policies and programmes”.

But doubts have been expressed all round the GCC. For example, in February, Kuwait’s parliament speaker Ahmad Al Saadoun said that union between members of the GCC is unlikely owning to differences in political systems.

“It is very difficult for a country like Kuwait that grants freedom of speech and where people are represented in parliament to form a union with countries whose prisons are full of thousands who are guilty of speaking their minds,” Al Saadoun told Al Arabiya in his first TV appearance after assuming his position as parliament speaker.

But this view was jumped on by others, like Mohammad Nasser Al Senussi, a former Kuwaiti information minister, who told Gulf News at the time that “Al Saadoun made a hurried statement. He should not have made such a statement, and he was criticised”.

There is broad agreement that something has to be done about the GCC. It has succeeded in offering its member states more security through mutual support, and the Peninsula Shield armed forces have been effective. For example, the recent exercises off the UAE’s islands were a reminder to Iran that the UAE has the total support of its GCC allies in rejecting Iran’s claims to the islands.

But its moves to economic union have been patchy. Despite the GCC customs union, goods are routinely delayed at borders to protect local produce against imports from other GCC states. And the dreams of a single GCC currency for the six nations did not come to fruition when a dispute of the location of a GCC Central Bank stopped the proposal.

The GCC is a group of like-minded nations, who share a common heritage of Gulf culture. But they have not built the shared political structures that would allow the pooled sovereignty that is required to allow full political union to flourish.

The discussions are still kept private, but when they are unveiled they will be more likely to succeed if they focus on ways to make the existing GCC work better, rather than offer a new over-arching political structure.