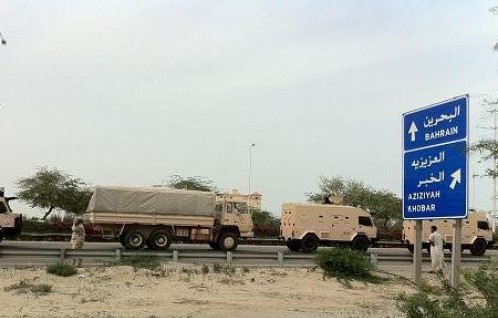 As the political turmoil in Bahrain reaches a boiling point, the government has asked for the assistance of the GCC—under the ‘Peninsular Shield’ mutual support program—to help protect strategic facilities.

The GCC, composed of Sunni governments, is willing to do this because they fear the presence of an Iranian-influenced state in their midst. Arab News runs an Associated Press piece on the issue; Yahoo.com’s ‘Maktoob’ news portal carries an Agence France Presse piece that specifies that Saudi forces were the first to arrive.

I think that much of the Sunni-Shi’a friction in the region is self-inflicted by Sunni governments. Intolerance toward their own Shi’a populations has fed discontent. Favoritism shown toward Sunni co-sectarians over the Shi’a populations, particularly in Bahrain, where the Shi’a represent 70% of the population, has the natural consequence of making people unhappy or even leading them to revolt.

Sunni attitudes, though, are not the only factor here. Iran, the predominant Shi’a state, has its own issues and its own history of messing around with the Sunni-dominated GCC states. Whether it’s exerting territorial claims, as is the case in Bahrain and the UAE, or calling for the overthrow of the Sunni governments, as with Saudi Arabia and Kuwait, Iran is seen to be behind much of the turmoil.

The Iranian government, led by a Shi’ite religious hierarchy, has its own problems with sectarian differences. It is not an innocent by-stander here. While its direct interference, at this time and in this location, may be unproved, its record in the region and across the decades is indeed a major part of what informs GCC opinion.

The parliament bloc’s statement, carried by the state-run Bahrain News Agency, asked for a three-month declaration of martial law and claimed “extremist movements” were trying to disrupt the country and push it toward sectarian conflict. The appeal also seeks a curfew and the dispatch of army units around the country.

An adviser to the royal court, meanwhile, said from neighboring Gulf Arab countries have arrived to help maintain law and order on the strategic island kingdom.