The Wild Web: The Super Injunction v.s. The Net 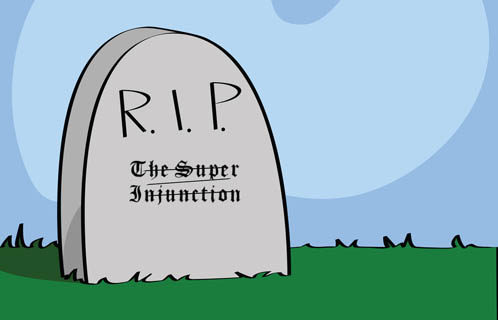 There’s been a lot of talk in the UK about super-injunctions, triggered by the seeming inability of anyone in public life to behave with even the scantest degree or morality or decorum. I suppose when the world’s most powerful man goes around inserting himself into interns, the Governor of California lives surrounded by his secret children and the head of the IMF seems to be channeling Casanova, you could forgive a certain laxity among the minor stars in our firmament.

The problem, of course, is that while they all like doing these things, they don’t like us knowing about them. I think, actually, part of the fun of doing it in the first place is the frisson of danger it involves. When the brown stuff really does hit the fan, using some of one’s hard-earned millions to brief a brief and gag the media seems to gaining in popularity. In the UK and elsewhere, ‘the media’ includes a clamorous pack of newspapers casting ever further afield to find salacity and scandal to reverse their plummeting sales figures and so taking an unusual interest in any scraps they can find.

What’s making things so much more fun these days is while you can use your power and wealth to gag a newspaper, you can’t gag the Internet. Once stuff is out in the wild, it’s game over. The publication of the names on Twitter of six people seeking “super-injunctions” to stop media publishing their names caused an outbreak of great wailing and gnashing of political teeth, with British Culture Secretary Jeremy Hunt telling The Independent:

“We are in this crazy situation where information is available freely online which you aren’t able to print in newspapers. We are in a situation where technology, and Twitter in particular, is making a mockery of the privacy laws we have and we do need to think about the regulatory environment we have.”

The problem is, of course, that Twitter, Google et al are all arguing that they are not the publishers of this material, they are merely a medium, a tool of communication. It would be like suing a telephone company because someone said something bad over the phone or sent a libellous fax. Or suing the paper mill because its product was used to commit a libel.

This is one reason why Google and friends are so very hesitant to take judgement calls over content posted on their platforms – the second they do so, they become editors and therefore publishers.

Governments are less than happy about this – and it can only be a matter of time before legislation is brought to bear on the free-for-all aspects of online platforms. The UK government is already making a racket about legislating against online platforms (Hunt was paraphrased in the Indy story linked above as saying there “may be a case for converging the regulation of traditional and new media”). If the industry won’t regulate this content itself, governments are arguing, then legislation must be brought to bear defining the responsibilities of platforms for the content they carry. This’ll potentially create an odd situation where communication platforms are forced to become, effectively, publishers by law.

Until that happens (and I fervently hope it doesn’t), the responsibility for creating, moderating, curating, sharing and publishing the content we post online actually belongs to us. We are all publishers.

You’d have thought democratic governments, the representatives of the people, would be happy that we’ve found a medium of open expression which gives us all the opportunity to take responsibility and use the power of free communication. But then those in power (as I found when I had that spat with German state secretary for the Federal Ministry of the environment, nature conservation and nuclear safety, Matthias Machnig) believe only they understand, and therefore should wield, power.

Including the power, as public figures, to behave awfully in private and then gag the public.