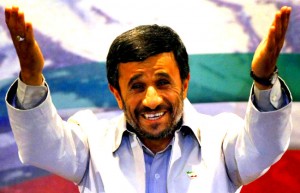 It’s been an interesting week in the Middle East.

‘Isn’t it always?’, you say.  Perhaps, but this one’s been particularly interesting.  We’ve had President Ahmadinejad’s ‘Tour of Lebanon’ which wrapped up with him throwing a stone, Monty Python-like, in the general direction of Israel.

Some Israeli commentators suggested that they should organize a snatch squad to grab the Iranian leader, take him back to Israel and put him on trial.  Given their recent form on this score with flotillas of unarmed peace protesters chugging along in the middle of the Mediterranean a plan to wrest the leader of the region’s mini-superpower from among tens of thousands of heavily armed militants was likely to remain in the realms of fantasy.  ‘Let’s wait  ‘til he takes a holiday in the Dead Sea. We can nab him when he’s posing with his newspaper for the holiday snap.’

The Israelis have themselves been busy getting to know their new ‘best friend forever’, namely Greece, having fallen out with their previous BFF, Turkey.   If ever there was proof that diplomacy is the school yard with long trousers then here it is.   Israel, apparently, is lacking enough space for its fighter pilots to hone their Tom Cruise type capabilities.  Turkey’s obligingly allowed them to do just that for a number of years  and sent their own pilots along too for ‘joint exercise’, as it’s known.   With that particular relationship now ‘down the crapper’, as they would say in America, the Israelis were faced with a problem.  ‘My enemy’s enemy’ thinking means that tourists doing a little late season island hopping this week in Greece were treated to sonic booms as they took in the sea air on the deck of their ferries.

Meanwhile Binyamin Netanyahu becomes ever bolder in his embarrassment of Barack Obama.  The Washington talks are now stalled as building of settlements recommences.   The strategy is clear – wait for the Democrats to take a pummeling in the mid-terms, two years to whistle while a lame duck Presidency draws to a close, then chirpy chirpy cheep cheep for the election of 2012 which is sure to provide a much more amenable environment for the Israelis.   This is the depressing but all too believable vista we’re looking at for the next couple of years.

The week ends with the arrival of The Elders on a tour of the region.  The Elders?  Who they, you ask.  A geriatric version of The Three Tenors perhaps.  Anyone for a tremulous Nessun Dorma?     No the Elders is a group of distinguished statesmen (and women Mary Robinson, the former UN Human Rights Chief is a member) established by Nelson Mandela in 2007.  This delegation, which includes former U.S President Jimmy Carter will visit Egypt, Syria, Israel and Palestine to see what they can do to ‘move the peace process forward’, as the saying goes.

Who knows, it could be an interesting week.