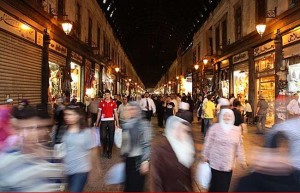 Let’s stop talking about politics and extremism. We need to go shopping.

Trade was arguably one of the things that once made the Muslim world great (and rich), and created fluid and mutually binding relationships with other great world powers.

Star products included spices from as far afield as India and Indonesia, Oman’s sweet fragrances of frankincense.  And coffee, ah, dear wonderful coffee with its warm hug of caffeine first thing in the morning, also came from the Muslim world.

So, at a time when global relations are showing the odd sign of strain (anyone mentioned the mis-labelled ‘Ground Zero’ mosque recently?), what antidote could be more fitting than the resurgence of Islamic branding and marketing as a 21st century phenomenon?

You all think I’ve lost the plot, don’t you? Some Muslims are going to be up in arms that I’m advocating a supposedly consumerist-capitalist-slave-making-spirituality-stifling paradigm. And Islamophobes are going to say that I’m trying to hide an Islamist take-over inside my recyclable plastic shopping bags.

Ogilvy & Mather, one of the world’s largest marketing and advertising agencies, has commissioned research to better understand the world’s 1.6 billion million consumers. The segmentation of consumers was not just for shopping’s sake, but to get under the skin of what makes ‘real’ Muslims tick, those1.599999 (recurring) billion Muslims, not the handful of crazy ones who think the way to get your fifteen minutes of fame is to blow things up.

Maybe it’s the juxtaposition of the seeming frivolity of shopping versus the scary headlines of bombings that gives rise to this kind of angst. Or maybe it’s that people who stand to benefit most from upholding the “Clash of Civilisations” thesis don’t want us to see the things we have in common as human beings. These shared aspirations include trying to become better human beings, world peace, eradication of poverty, equality and justice for all, and an end to exploitation, violence and suffering. Oh yes, and we all need stuff, starting from the basics like food, clothing and construction materials.

So, given our shared human need for things which we need to buy, perhaps we can use trade and commerce, built on ethical, sustainable and non-exploitative principles, to understand a bit more about each other and to build relationships. Please note that I am not advocating a materialist, exploitative, disposable culture. I’m simply pointing out that all human beings need things to survive, and trade is a basic of human civilisation.

So what did Ogilvy & Mather’s research tell us about Muslim consumers? Importantly, instead of judging them on a single dimension of how ‘devout’ they are, it looked at what role religion plays in their lives. Their findings identified two broad categories which they labelled ‘Traditionalist’ and ‘Futurist’ and in each one were a further three segments. ‘Traditionalists’ have a desire for harmony and belonging, they are quietly proud of their faith and align with values of tolerance and compassion. ‘Futurists’ see themselves as steadfast followers of Islam in a modern world. They are individualists who ‘choose’ Islam. Their pride is intense, regardless of the extent to which they would be categorised as ‘devout’.

The research insights are meaningful because the trick to successful commerce is the same as that needed for international relations and diplomacy: it is to understand the drivers and motivations of people and to give them due recognition.

So, when we talk about trade with Muslims, we might find ourselves positively addressing wider issues of international relations. In the world of shopping, I believe they call that a ‘two for the price of one’ offer.