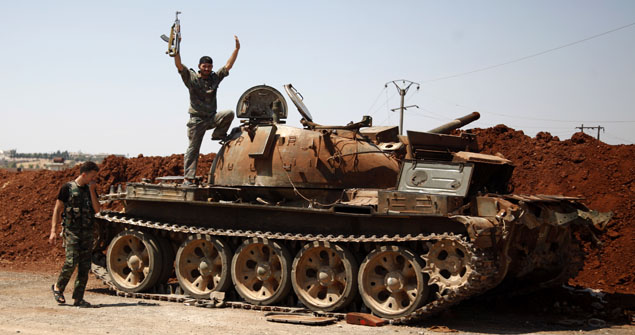 The continuing fighting in Syria is a golden opportunity for foreign governments to put military forces onto the ground and take positions in advance of any political end-game. Syria’s neighbours want to influence events to suit themselves and do not have Syrians’ best interests at heart. Any forces on the ground will be there to influence events in favour of their sponsors.

One possible recent example of this were 48 men who have been held by the Free Syrian Army’s Al Baraa Brigade. The Iranian government has claimed that the 48 are all pilgrims visiting the Sayyida Zeinab shrine in Damascus, accompanied by an Afghani interpreter, but the FSA claims they are members of a 150-strong group sent by Iran.

On the opposition side, journalists reporting on the Free Syrian Army have seen ill-defined units of people who appear to be Islamist mujahideen gathered from far afield to take part in deposing the government. They are experienced fighters, but do not speak much Arabic and do not want to mingle with the Free Syrian Army. These militants want to take vengeance for decades of repression from Al Assad, but they also want to establish their Islamist viewpoint in the new Syria.

More mainstream supporters of the opposition have refused to send troops or military supplies for fear of either getting involved in an uncertain civil war, or for fear of giving the opposition the appearance of not being Syrian. The Saudi and Qatari support for the Free Syrian Army and the Syrian National Council has been muted to avoid the accusation from Syrians that the opposition has become “khaleeji” and is not a pure Syrian movement.

But when one can read on the front page of Gulf News that President Barack Obama has signed a presidential order permitting secret support for the opposition, firstly it has ceased to be secret, but it also shows greater willingness from the Americans to get involved in supporting the removal of Al Assad but this overt American support is not likely to translate into troops on the ground.

The group who are making some of the best military preparations to secure their future are the two million Kurds who live in Syria. They are being offered serious support from the autonomous Kurdish Regional Government, KRG, in northern Iraq, where President Massoud Barzani has already announced, according to the Kurdish website Peyamner, that young Syrian Kurds who have travelled to the KRG will be given military training, so that they can play a role in “protecting their native land and maintaining security within it”.

Barzani has said that none of these new semi-military units have been sent to fight in Syria, nor was it the KRG’s intention to send them to fight at this time. The KRG’s idea is that they would eventually be dispatched in order to “fill the security vacuum” once the Syrian regime collapses, when they would be at the disposal of the “Supreme Kurdish Council” which is a body set up under Barzani’s aegis in Erbil last month and includes the Kurdish National Council and the People’s Council of West Kurdistan, which is what political Kurds call the Kurdish areas of Syria.

The Syrian Kurds are split between those in the Democratic Union Party, which favours a confederation between Syrian and Iraqi Kurdistan, as well as backing the PKK, the militant Kurdish opposition militia in Turkey; and other Syrian Kurdish groups who want to see a Kurdish autonomous region within a newly reconstituted Syria.

This power grab by Barzani will be very controversial in Baghdad and Istanbul, never mind Damascus, and Turkish Foreign Minister Ahmet Davutoglu visited Erbil this week to try head off Barzani.

But Davutoglu could not have been happy when he left the KRG, given the advanced state of Barzani’s plans and a meeting he held with the leader of the Syrian opposition, an ethnic Kurd, Abdul Basit Sayda, head of the Syrian National Council, who despite emphasising the importance of unity for Syrian people, also told his Kurdish audience that that the Kurdish issue in Syria should be resolved through constitutional recognition of Kurds.