El Baradei Drops Out: “It’s as if Mubarak had Never Been Overthrown” 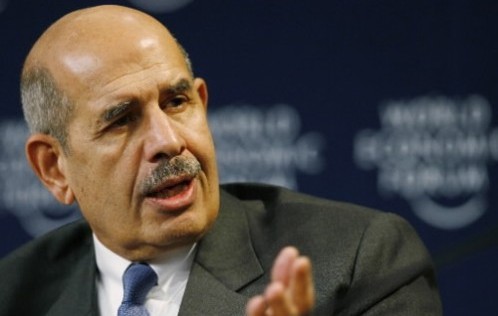 Mohammad Elbaradei has withdrawn from the Egyptian presidential election. He is the former head of the International Atomic Energy Agency, and was a thorn in the Bush administration’s eyes because of his honesty and lack of tolerance for false accusations.

Elbaradei says he is afraid that the presidential election will be fixed by Egypt’s powerful military, which still controls the country. He complains that the military is ruling “as though Mubarak had never been overthrown.” This outcome is because the officer corps does not believe Mubarak was overthrown. They think they deposed him on behalf of the people, and have gone on ruling on behalf of the people.

According to al-Ahram writing in Arabic, one of the considerations affecting ElBaradei’s decision was the new plan to have the president elected before a constitution is drafted. He complains that the constitution will set the president’s relationship to the other powerful officer holders, but that relationship won’t even be known during the presidential campaign.

I was at a conference in Turkey in December on the Arab Spring to which some Egyptian activist-scholars came. I asked one if, given that the Muslim Brotherhood had won the parliamentary elections, there would be an MB Prime Minister. He said the equivalent of ‘never in a million years!’

I was amazed, because in parliamentary systems that is the way it works. The majority forms a government and chooses a prime minister.

But in fact the military intends to keep Kamal Ganzouri at the head of the government, regardless of the parliamentary alliances that are formed.

One of the tepid reforms accepted by King Muhammad VI of Morocco is that from now on he would appoint the prime minister from the largest party in parliament.

Elbaradei is reportedly afraid that the Muslim Brotherhood will like having its parliamentary majority so much, and will like having the opportunity to shape the new Egptian constitution, that they will strike a deal with the military to let them do as they please.

In essence, Egypt has a situation not so different from 2006, when the old ruling elite allowed 88 Muslim brothers into the lower house in that year’s elections. The MB thus became a junior partner in the military junta that behind the scenes rules Egypt. Now it will become a senior partner, but is still co-habiting with the old elite.

The bottom line is that if Elbaradei thinks that the presidential election will not be on the up and up, it is a huge blow to the legitimacy of the current process.