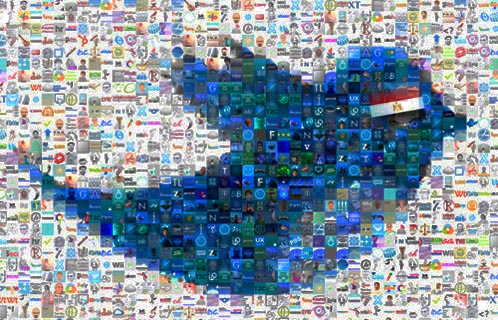 Egypt’s Day of Rage unfolded yesterday afternoon, the news of gathering crowds and images of protesters heading for Tahrir square shared over Twitter by activists and people in general in a fascinating, blow-by-blow (later on, literally) account. I can’t find Ramadan Al Sherbini’s lead story from Gulf News online today, so here’s a link to another of his stories on the protests.

As before, with events in Iran (which I wrote about extensively in relation to the role of social and mainstream media, you can get the backstory here if you like), the information flow quickly became cluttered with a mixture of retweets, Twibbons and other outside voices clogging up the #Jan25 and #Egypt hashtags.

However, as before, those of us following a number of people in Egypt had access to reliable, first-hand information and were able to watch the story unfold. As the afternoon wore on, mobile networks went down around Tahrir – the government was blamed for the outage, but operators are insisting it was their networks at fault – and vendors around the square, cafés and the like, took the password protection off their wireless networks so people could continue to get word out. There were widespread reports that the government had blocked Twitter, but this is a technically aware generation, people – access was obtained using different clients and proxies.

Mainstream media got access to events through Twitter too – sometimes even quoting the Tweets of journalists on the stweets such as this example from the Wall Street Journal. Such a huge repository of eye witness reports makes for a fascinating account of events – and, importantly, creates awareness and publicises the protest. This post, from Global Voices, shows how Tweets can be used with devastating effect in reportage. There were a lot of brave journalists among the crowds, including Al Jazeerah’s cameraman, who was hospitalised with four rubber-cased bullets lodged in his arm as police tried to break up the demonstrations.

Twitter was also being used as an organising tool, with people able to share information widely – when you tweet to a popular and timely hashtag, you’re effectively multicasting. And it’s being used to get word out this morning, as a second day of demonstrations appears to be on the cards.

There has been a lot of debate over the role of social media, particularly Facebook and Twitter, in Tunisia and, prior to that, Iran, both in terms of quite how fundamental both were to events and how reliable reports were. Without a doubt, the closer you are to an event, the more reliable Twitter becomes – by closer, I mean that you have established relationships with people of reputation on the ground or, at the most, at a second remove. Once you get past the third degree of separation, you’re losing eyewitness credibility and getting bogged down under the hashtag traffic. But you’re also seeing a world that has had its attention brought to the Jan 25 protests and reacting overwhelmingly in support of the protestors, something that Tunisia hacked Facebook to stop and that Egypt appears to have blocked Twitter to stop.

Blocking Twitter won’t stop word getting out. You’re as well to try and stop grains of sand falling through marbles. Here, for your amusement, is the official word from the Egyptian State Information Service. Compare it to #Jan25 and enjoy.

One Response to Egypt’s Uncontrolled and Uncontainable Tweets of Rage