Egypt’s Troubled Relationship With Its Military: An Unblinking Portrait 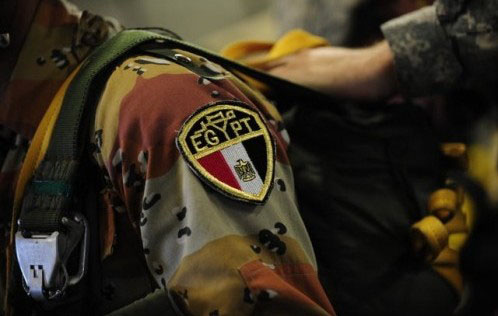 “Didn’t I tell you?” the colonel’s daughter Fayza al-Tuhami tells the semi-conscious protagonist of Mohamed Mansi Qandil’s Qamar ʻAla Samarqand (Moon Over Samarqand). “Those soldiers, they’re always looking for an enemy to defeat. And because they’re incapable of defeating the enemy lying in wait across the desert, they defeat us instead. We’re an easy target.”

For obvious reasons, the entire “Fayza”  section of Qandil’s novel was suppressed by Dar al-Hilal, the state-owned press that first published Moon Over Samarqand in January 2005.  The exotic stories of life and legend in Central Asia — part of Qandil’s nostalgic reconstructions from the medieval Islamic civilizational heritage, including a long section on Uthman’s Quran taken directly from his earlier magazine travelogue — were allowed to stand.  So were the disorders and violations of Soviet and post-Soviet Uzbekistan.  But the most bitter and immediate part of the novel, which takes place in Cairo and Heliopolis rather than Tashkent and Samarqand, was not deemed fit to print.

Fayza’s story dramatizes the ongoing pathology of Egypt’s relationship with its paternalistic — and far from omnicompetent — military elite.  We first meet her at a party; the hypocrite generals and colonels and military intelligence men, including her father and Ali’s, are drinking gin disguised in tomato juice; the young people smoke hashish, listen to music, and make fun of their dads.  Later we see that their nihilism has roots in despair.  Ali enters the dim basement studio where Fayza (whose name, ironically, means Victorious) paints horrifying canvases: “scratched lines … naked, amputated bodies, their limbs incapable of joining together . . . lost and defenseless, in a limitless grey void.”  It turns out that Fayza has been repeatedly raped by her own father, starting at age 13.  One could not ask for a starker metaphor of an army preying on those it exists to protect.

Qandil’s at times melodramatic prose, in translation here by Jennifer Peterson, plays up the pathos.  As a girl, Fayza adores both her father and his uniform: “It was as though I lived in constant anticipation of his arrival.  I wanted nothing more than to sleep on the chest of that creature with broad shoulders always decorated with sparkling stars and in that dark green uniform with red stripes.  As soon as he appeared on the doorstep I would cling to his neck.  My sky hung on his shoulders and his embrace was the limit of my world.”

The first rape, described in excruciating detail, occurs in 1967.  Father and daughter are watching Faten Abdel Wahab’s I, He, and She (1964) on the living room couch after Fayza’s mother has walked out.  He is drinking.  She fantasizes about painting “the world’s largest painting on the pavement of Tahrir Square”: a big painting of her girlfriends naked.  She jokes: “Maybe that would help to solve the traffic problem.  It would make the drivers slow down a little.” (356)  Something changes; the atmosphere becomes irretrievably sexual. As the rape unfolds, almost in slow motion, the father unfathers himself: “Finally I called out, pleading, ‘Dad! Dad!’ and he yelled at me furiously, ‘Don’t say that!’” In consummating her love and admiration for him, of course, the colonel destroys it.

During the War of Attrition, Fayza enters university. She is briefly — happily — married to a junior officer. But then comes the 1973 October War.  Fayza recalls: “I followed all the news broadcasts and military statements, wishing I could believe them. I knew my father well, and knew that his only victory had been over my body.” Her husband dies. Nightmarishly, her father returns, facing her “with disheveled hair and burnt clothing, covered in dust and bruises . . . stinking of gunpowder and blood.” She lets him take her home:

He embraced me, and because of my extreme loneliness I submitted to his embrace. I needed a live being beside me. It seemed the war would continue to burn until it devoured everyone alive. But then my father’s fingers sank into my hair. It’s an ancient curse, my unconscious friend: The defeated return and seek another arena in which victory is guaranteed, an easy target. The same old fingers spread over me, sticky and trembling.

In the book’s Arabian Nights-style structure, Fayza’s story is a twice-framed tale that echoes rather than advances the overall plot. Her immediate audience is the semi-conscious Ali, who lies in the hospital after being brutally beaten by conspirator Talal al-Ansari during his Islamist cell’s 1974 attempt to take over the Military Technical College and assassinate then-President Anwar Sadat.  Fayza presents her degradation as parallel to Ali’s own suffering from the military government’s incompetence — and from the authoritarianism that, Qandil implies, has led to the emergence of a violent Islamist undertow. “They don’t deserve us, Ali,” Fayza says. “They don’t deserve the title of father. The only thing they deserve is their continual defeat.”

The entire Military Technical College Incident was cut from the 2005 edition.  Fayza’s narrative, with its damaged but fiercely articulate heroine, was likewise an “easy target” for the internal censors at Dar al-Hilal. (The cuts happened partly with and mostly without the author’s permission.)  Fortunately the novel has been republished, first by Merit and now in a handsome 568-page edition from Dar El Shorouk. It is also available from AUC Press in Jennifer Peterson’s sharp and luminous translation, from which I have been quoting.  (Read Susannah Tarbush’s review here.)

Qandil is no westoxicated feminist liberal revolutionary.  His gender-based critique of Egyptian timophilia is all the more powerful for coming from a writer whose aesthetic and social leanings are actually rather conservative.  In one of many interviews after his later novel Yawm Gha’ib Fi al-Barr al-Gharbi (A Cloudy Day on the West Side, Dar El Shorouk, 2010) was shortlisted for the 2011 “Arab Booker” prize, Qandil told a Ruz al-Yusuf interviewer he wrote historical novels “to escape from the randomness of the present.”  In a talk published last January 25, he called on the Arab world to look to East Asia, specifically China, for a model of how to modernize without cultural self-betrayal.

Yet this non-trendy, sometimes overlooked novelist has produced an unblinking portrayal of Egypt’s love for its military.  That misguided love, he suggests, is rooted in the original sin of Egypt’s postcolonial authoritarianism.  More than any of the dozens of novels and plays now said to have “predicted” Egypt’s January uprising, Qandil’s critique is acutely relevant today.

Margaret Litvin is assistant professor of Arabic and comparative literature at Boston University. Her article on Moon Over Samarqand appears in the current issue of Journal of Arabic Literature.