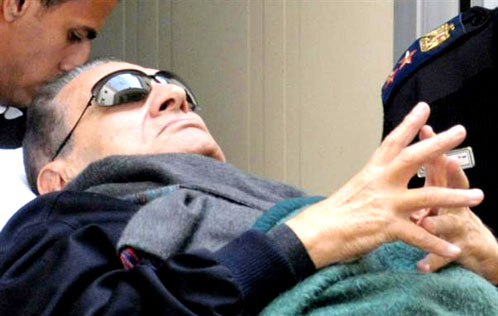 I was there when the helicopter carrying Egypt’s 30-year tyrant flew overhead in an open space brimming with a motley crew of martyrs’ families, journalists, police, lawyers and the odd pockets of Mubarak supporters. I was there when a big screen perched from behind the walls of the vast Police Academy beamed the now iconic footage of the ousted octogenarian laid out on a stretcher in humiliation, looking haggard and defeated.

After he was wheeled into the courthouse last August, Mubarak’s first appearance behind bars stunned the nation. The moment was historic, despite the fierce debate over the seriousness of the trial in the days that followed.

It was a moment that simultaneously re-infused confidence in the “revolution” and instilled fear that the long-awaited trial was too good to be true.

The months and weeks that followed confirmed those fears.

Inside the court, it’s hard to miss the pervasive absurdity of the entire scene. Following a two-month hiatus in proceedings pending an administrative court ruling on a request by lawyers representing the victims’ families to change the judge, the trial resumed on December 28 amid an atmosphere of clearly deflated public interest.

It was no coincidence that it took over two months to make a final decision on the eligibility of the judge in a case where every minute counts, with supporters of the defendants continuing to wreak havoc outside the court. They have made use of the ample opportunity to tamper with the case whether by mysteriously coming up with new evidence to absolve their masters, or by intimidating the prosecution witnesses, one of whom (Police General Said Moussa, ex-head of communications at the Interior Ministry) had given a testimony in court which for the most part contradicted statements he gave to the prosecution. His words are almost sure to absolve ex-Interior Minister Habib El-Adly of any criminal responsibility for killing protesters.

And while the counter-revolutionary forces continued to do what it takes to methodically and “legally” kill the case, refusing to even cooperate with the prosecution’s investigating judges, other state apparati have worked relentlessly to marginalize the entire cause of justice for the martyrs with the ultimate goal of ensuring that when a verdict sentencing the criminals to a symbolic number of years in prison is issued, there would be no public outcry.

Misled by the state media and the numerous so-called independent channels that have adopted the official rhetoric on the issue, the whole notion of the “revolution’s martyrs” and the public perception of what constitutes justice for them, has been conflated with the provision of a state compensation fund to “appease” their families. The constant fear-mongering reinforced by a security vacuum that has recently seen a stream of kidnappings and hostage-taking where the police miraculously step in to save the day, has dampened Egyptians’ memory of the pre-January 25 days and the days of the uprising when “police” was synonymous with torture and abuse of authority.

Throughout the past months, outrage over the brutality of the premeditated violent crushing of the peaceful uprising which in the most conservative estimates has claimed 846 lives, has gradually subsided. And while this change in public sentiment may have little to do with the performance of the judge presiding over the case whose integrity one cannot contest without evidence, there is no question that the court is influenced by the overarching lack of political will on the part of the ruling Supreme Council of the Armed Forces to convict Mubarak on the particular charge of complicity in killing of 225 peaceful protesters and injuring over 1,300 in Egypt’s public squares.

Even though the prosecution has demanded the maximum sentence for Mubarak, El-Adly and four of his aides on those charges, it would be naïve to imagine that Mubarak will serve any jail time, let alone be sentenced to death. According to lawyers, even if the unimaginable happens and the judge orders his execution, the fact that he is over 80 guarantees that he is entitled to two levels of amnesty, meaning that he will be sentenced to a maximum of 15 years.

Since he was first remanded in “custody” last April, Mubarak did not spend a single night in a prison cell. While in the early days his interrogation took place in one five-star hospital in Egypt’s top resort of Sharm El-Sheikh, the rest of his time pending trial has been spent in another army-run world class health facility in Cairo on the pretext that he is too ill to move to Tora prison hospital, which authorities claim lacks the proper facilities to handle his “mysterious” health condition.

The truth is, if the army council wanted Mubarak behind bars, they could have re-built the entire hospital to accommodate him by now. But that is the furthest thing from the deal they struck in the critical hours prior to the Feb. 11 historic moments when Egyptians were told he had stepped down and that the army council has taken over.

The prepared scenario has been played out to the letter, complete with the parallel plan to gradually vilify the uprising and the high profile figures associated with it, to the extent that when police officers accused of killing protesters at or near police stations were declared innocent on the grounds that they acted in legitimate self-defense, there was barely a squeak.

“The trial of the century” made great headlines back in the day, but without a just “verdict of the century” to close it off, this absurd piece of courtroom drama will join the shameful list of reminders that Egypt’s revolution is far from complete.