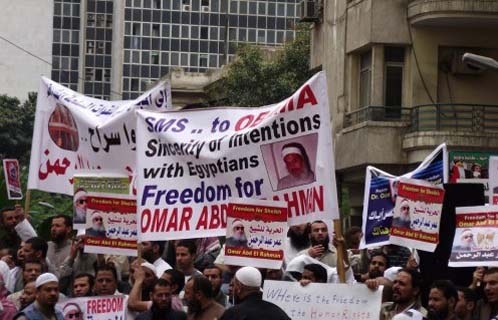 These days, remarkable change in Egypt has become quite ordinary.  In response to the rules of Egypt’s political game being totally upended, political and social groups have undertaken soul-searching and, in many cases, transformation.  In a display of this shake-up, al-Jama’a al-Islamiya- a jihadist group that waged violent warfare against Egyptian society and state during the 1980s and 1990s- recently announced the formation of a political party. Regardless of your opinion on their party platform (which, to put it lightly, is unfriendly towards women, Copts, and secularists), this development is a remarkable about-face for the group.

It may come as a surprise that this Building and Development Party- which rhetorically espouses ideas of pluralism, political inclusion, constructive dialogue, and protection of the revolution’s democratic ideals- owes its existence to what was once the state’s number-one enemy.  During the 1980s and 1990s, al-Jama’a al-Islamiya conducted a violent campaign in the name of Islam against the Egyptian regime.  The group’s ideology was informed by two main concepts in Islamic thought: takfir, the act of declaring fellow Muslims to be unbelievers, and hisba, broadly meaning the duty to enjoin good and forbid evil.  Al-Jama’a reasoned that because the Egyptian regime did not rule 100% in accordance to Islam, it could be declared infidel.  The state was not only illegitimate, but an enemy of Islam- therefore, violent means were sanctioned against it.  Indeed, one of the group’s leaders recently admitted that Hosni Mubarak survived at least twelve of al-Jama’a‘s assassination attempts.

Al-Jama’a al-Islamiya’s thinking began to change beginning in the late 1990s, once its leaders had been thrown in prison and the movement appeared to be defeated in its quest to seize and Islamicize state institutions and society.  In a process of revisionism that resulted in the total renunciation of violence by 2002, al-Jama’a came to understand the Egyptian state no longer as an enemy, but a potential ally.  New ideas permitted tolerance of a government that didn’t fully implement shari’a law because (1) such a regime could only be declared infidel by the top echelon of religious scholars, and (2) even if it were decided as such, violent rebellion against the state was prohibited.  Thus, al-Jama’a accepted the legitimacy of governments that deviate from Islam and even considered itself to be bound by them.  The state was now considered of importance in advancing al-Jama’a’s own goals (for example, the protection of Muslims, implementation of shari’a, etc.).

During this period, al-Jama’a even dabbled in ideas of political participation.  In a radical departure from its condemnation of moderate Islamist groups like the Muslim Brotherhood who participate in parliamentary politics as weak, al-Jama’a declared politics as a legitimate means through which to achieve its goals.  It also expressed limited pluralist notions, accepting the presence of most, though not all ideological trends within the political spectrum.  However, the Mubarak regime had no intention of letting al-Jama’a integrate and participate in the political system; still considered a threat to the regime, the group’s commitment to peaceful politics remained untested.

This changes now, thanks to the Egyptian revolution.  Al-Jama’a is free to organize, and it has in fact gone in the direction of party politics. The group is not only condoning, but choosing to be a part of the system it so vehemently rejected only twenty years ago.  Being totally inexperienced in politics, al-Jama’a’s party is unlikely to have a significant impact upon the Egyptian scene; there’s no need to worry whether Egyptians will be subjected to religious police in 2012.   Lacking the organizational coherence and political expertise to achieve meaningful political gains, al-Jama’a’s road to political power will be an uphill one.

Although its waves within electoral politics may be small, al-Jama’a’s decision to translate revisionist ideas into action will have important implications for the group itself. Participation in formal politics has been known to fracture Islamist movements into reformist and traditionalist camps (the Muslim Brotherhood being the most notable example).  Al-Jama’a already split into revisionist and militant trends in the early 2000s, with revisionist being the more mainstream.  However, even within revisionists there is likely to be debate regarding whether al-Jama’a’s goals are best achieved through politics or traditional religious and social activities.

Similarly, al-Jama’a’s entrance into politics will also likely have implications for the Islamist spectrum,with radical elements being even more marginalized than before.  Violent jihadism as an ideology lost legitimacy more than a decade ago as Egyptians grew resentful of the devastating toll that jihadists groups were taking upon society.  When al-Jama’a al-Islamiya renounced violence, remaining jihadists either adopted revisionism or joined the ranks of al-Qaeda.  With al-Jama’a’s participation in formal politics, those who were ambivalent towards democratic and pluralist ideas will be nudged towards more radical (and uninfluential) movements.

With this decision, al-Jama’a al-Islamiya’s soul-searching has brought it 180 degrees from where it stood less than twenty years ago.  That this is passing news in Egypt shows the depth and scope of change that the country is happily undergoing.

Sarah Grebowski is a freelance journalist and blogger based in Cairo. Previously, she worked as a research assistant to Dr. Amr Hamzawy at the Carnegie Middle East Center in Beirut. Sarah graduated from Boston College in 2009 with a degree in international studies and Islamic civilizations and society. For more, read her blog Cairo Comment and follow her on Twitter @grebowskisarah