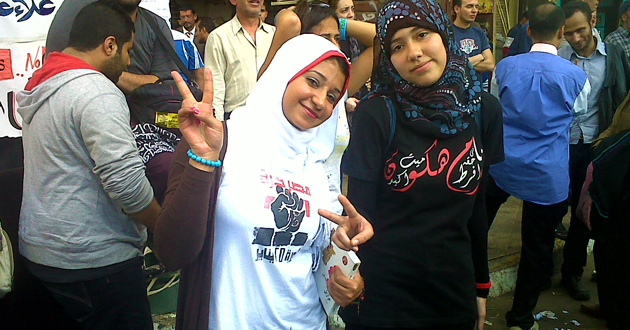 The challenge exposes conservatism that is deeply rooted in Egyptian society and cuts across ideological, cultural and religious fault lines. It lays bare differing interpretations of concepts such as diversity, freedom and faith and highlights a battle by women who were prominent in the campaign to overthrow Mr. Mubarak to have their rights recognised in post-revolt Egypt.

The women confront a conservatism that pervades the Middle East and North Africa as illustrated by the recent creation of a soccer league in the United Arab Emirates that allows women to play behind closed doors in the absence of men as well as Saudi Arabia’s struggle with the International Olympic Committee’s demand that it include women among its athletes at this year’s London Olympics.

UAE and Kuwaiti royals joined prominent foreign representatives this week at a two day conference to encourage women’s participants in sports and the launch of the Fatima Bint Mubarak Women’s Sports Awards, named after the third wife of the founder of the UAE, Sheikh Zayed bin Sultan Al Nahyan, who heads the Family Development Foundation.

Egyptian women are battling to have their rights acknowledged on two fronts: recognition by their often socially conservative revolutionary male counterparts as well as Egypt’s post-Mubarak military rulers who have systematically humiliated detained women protesters by subjecting them to virginity tests. A court this week acquitted a military doctor who conducted the tests.

More secular Egyptian women fear that the rise of Islamists further threatens achievement of their rights. Islamists have dissolved the Women’s Council, charging that it was a creation of Suzanne Mubarak, the ousted president’s widely despised wife. Islamist members of parliament have also proposed the establishment of a family ministry that would operate in accordance with Islamic law and roll back legal advances introduced by the Mubarak regime.

The feminists issued their challenge in response to a decision by the ultras — militant, highly politicised, soccer fans — to allow women to participate in their 16-day old sit-in in front of parliament only during daytime and to ban them at night starting from 22:00.

The ultras are demanding justice for 74 of their comrades who died in a soccer brawl in the Suez Canal city of Port Said that they believe was instigated by the government in retaliation for their role in the ousting of Mr. Mubarak and their militant opposition to his military successors.

In a statement quoted on the Egyptian news website Bikya Masr, the Independent Egyptian Women’s Union said that those “who carry the flame of liberty against the oppressive powers should respect it first.” They said that their understanding of diversity and faith ruled out restricting women’s right to protest.

The battle for women’s rights is one that is being waged by different women’s groups, secular and religious, whose definition of women’s rights varies both among Middle Eastern and North African groups as well as Western ones.

Western groups objected last month to a decision by the International Football Association Board (IFAB) to allow observant Muslim women to wear a headdress that meets their religious and cultural requirements as well as safety and security standards.

The conservatism is most deep-seated in Saudi Arabia, home to Wahhabism, one of the world’s most puritan and restrictive interpretations of Islam that allows women to travel abroad only with the permission of a male guardian and bans them from driving. The kingdom, under threat of exclusion from the London Olympics if it fails to field women athletes and pressured by human rights groups has responded publicly with a series of test balloons on how to respond.

Saudi officials first leaked a story earlier this year about a plan to build the kingdom’s first stadium especially designed to accommodate women who are currently barred from attending soccer matches because of the kingdom’s strict public gender segregation. The planned stadium was supposed to open in 2014. Saudi media subsequently reported that the plan had been shelved.

Deputy education minister for female student affairs Noura al-Fayez said in two letters addressed to Human Rights Watch that the government was working to set up a “comprehensive physical education programme”, including sports facilities and a health and nutrition awareness scheme “as part of its national strategy for physical education for boys and girls”, according to the daily al-Watan newspaper. Ms. Al-Fayez said physical education for girls was under consideration “as one of the priorities of the ministry’s leadership”.

The letters didn’t stop Human Rights Watch from accusing Saudi Arabia in a report of kowtowing to assertions by the country’s powerful conservative Muslim clerics that female sports constitute “steps of the devil” that will encourage immorality and reduce women’s chances of meeting the requirements for marriage.

The kingdom’s toothless Shura or Advisory Council moreover issued regulations for women’s sports clubs, but conservative religious forces often have the final say in whether they are implemented or not. Saudi Arabia’s official sports body, the General Presidency of Youth Welfare, presided by a member of the royal family, Prince Nawaf Bin Faisal, only caters to men. As a result, the kingdom last year hired a consultant to develop its first national sports plan – for men only.

Prince Nawaf subsequently went a step further by telling a news conference: “Female sports activity has not existed (in the kingdom) and there is no move thereto in this regard. At present, we are not embracing any female Saudi participation in the Olympics or other international championships.”

Despite Saudi women in the kingdom pushing the envelope by forming private clubs of their own, Prince Nawaf asserted that the demand for women’s participation came from Saudi women living abroad. He said the kingdom would work to ensure that expatriate Saudi women seeking to compete in the Olympics on their own account rather than as official delegates would do so “in the appropriate framework and comported with Islamic law.” He said he was working with the Saudi mufti and religious scholars to guarantee that nothing “infringed upon the Muslim woman.”

Saudi Arabia adopted a similar approach at the Youth Olympics in 2010 where Saudi equestrian participated without official endorsement and won a bronze medal in show jumping. It was not immediately clear whether the approach would this time be sufficient to remove the IOC’s threat of excluding the kingdom from the Olympics.

The evident debate about women’s rights to sports is part of a far broader discussion about the position of women in Saudi society. In an unusually frank interview with the BBC, Princess Basma Bint Saud Bin Abdulaziz lambasted the kingdom’s discriminatory policies and called for the drafting of a constitution that would treat men and women equally as well as sweeping reforms, including “abusive” divorce laws, an education system that teaches “that a woman’s position in society is inferior” and “that the angels will curse her if she is not submissive to her husband’s needs,” and a social affairs ministry that “is tolerating cruelty towards women rather than protecting them.”

To be sure the conservatism that inhibits women’s rights has support among conservative segments of the Middle East and North Africa’s female population. Three Emirate women, have launched, according to a report in The National, a behind closed doors soccer league in Abu Dhabi, the capital of the far more liberal UAE alongside the country’s national women’s team because they had no opportunity to play in an environment that banned men.

“There are some girls that don’t mind playing in front of men. But there is a huge percentage of Emirati women who can’t play in front of men because of cultural reasons. Those in the community who want to play the sport after university don’t have a place to go. It’s all open and there isn’t really a place for the sport to be developed,” said government employee Mariam Al Omaira, a founding partner of Irada (Determination) Sports Development Company.

The league has 84 players spread over six teams.