Egyptian vs American Elections: What Do Secularists & Women Think of the Results? 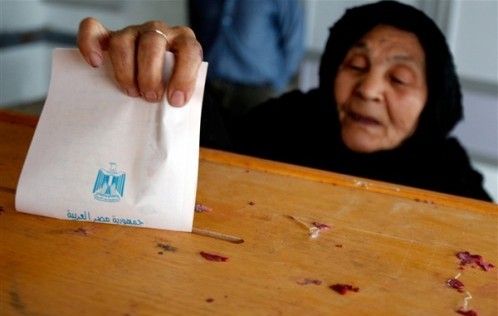 The election results for Egypt’s lower house have been announced, and the Muslim religious parties appear to have gained over 70% of the seats. The Muslim Brotherhood is claiming its Freedom and Justice Party took 47% of the 498 seats in the lower house of parliament.

The hard line fundamentalist Nur Party won 29% of the seats contested on a party basis.

To have 51%, the Muslim Brotherhood party needs a coalition with another party. Its leaders have at least said that they prefer to make that alliance with a secular party like the Wafd rather than with the hard line Salafis.

The other big political news is that Newt Gingrich won the Republican primary in South Carolina. I have noticed a big difference in the coverage of these two events in the US press. American journalists noted that 60-65% of Republican voters in South Carolina are evangelicals. But they did not then add reaction to this statistic. They did not then immediately quote pro-choice women or secularists as saying that they were afraid South Carolina’s church-goers have a dispropotionate influence on US politics (South Carolina’s population is only 4 million.). In contrast, US journalists who reported an MB win immediately added that women and secularists were worried about it.

Then, you don’t see much in the US press as to why Egyptians voted as they did.

Gingrich’s win is attributed to good debating skills. To Romney’s gaffes and inability to escape the image of a spoiled rich kid. To the state’s high unemployment rate. To evangelical discomfort with Romney’s Mormonism.

No similar reasons are given for the Muslim Brotherhood’s win in Egypt. Were their opponents good or bad debaters? Weren’t a lot of the candidates they defeated from the old rich elite?

Class resentments are seen as fuelling the defeat of Romney, but are seldom mentioned as a motive for voters in Egypt. But isn’t it likely that many secularists and persons with ties to the Mubarak regime who ran for office lost because they are thought to be rich and to have stolen people blind under Mubarak.

But what if Egyptians voted for the religious parties because they saw them as uncorrupt and despite their religious platforms, not because of them? Polling shows a big increase in 2011 in the proportion of Egyptians who say they are Egyptians first and Muslims second– from 8% earlier in the decade to 50% today. Likewise almost no Egyptians think that the revolution against Mubarak was made to establish a religious state.

It is therefore probable that religious motivations actually played a larger role in the primary in South Carolina than in the election in Egypt! Likewise, an MB leader like Essam El-Erian is the voice of reason compared to Gingrich and is no worse in his own way than Gingrich’s sugar daddy, Sheldon Adelson.