Egypt: A Role Model for the ‘Have Nots’ 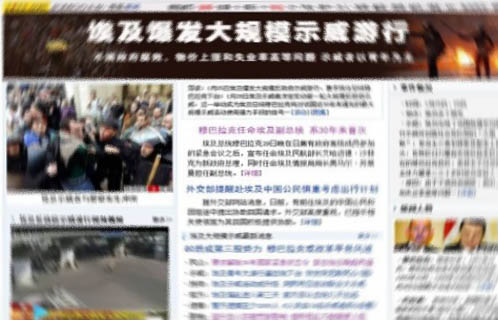 Egypt's Day of freedom broadcast around the world

It seems like a lifetime. But but in fact it was only ten days  ago when I suggested in a post that the world should look further afield than the Middle East for potential dominos – countries where populations, inspired by the example of Egypt and Tunisia, might soon rise up and challenge their governments.

Specifically I mentioned Pakistan, Thailand and, perhaps unfairly, Indonesia. To that list I would add China and Iran – maybe not as imminent candidates for change, but as countries where the conditions exist for upheaval in the future. What are those conditions?

I’m not a political scientist, so you are not going to get complex theories in this post or any other. I’m just a person who has lived for a while, travelled a bit, and watched a lot of revolutions – big and small – come and go.

But it seems to me that most revolutions start with the tension between haves and have-nots. Human rights are the least concern of people struggling to get from one day to the next. Their priority is staying alive – keeping their families together, having enough to eat, having decent shelter. If you have a society where there is a significant minority, or perhaps a majority, living under these conditions while witnessing others living what they see as better lives, then you have a fertile ground for change.

However, that is not usually enough. Where the haves concentrate political power into a small group, and use that power to deny a voice to the have-nots, the fear they generate through the apparatus of the state is usually enough to maintain the status quo. Things change when an educated and articulate middle class, that might have prospered under the autocratic regime, see that their aspirations are limited by a government that concentrates economic and political power among a privileged elite. And the catalyst is usually some dramatic event – economic, social, environmental or political – that threatens their position in society or outrages them to the extent that they lose their fear of the state apparatus.

At that point they find common cause with the underprivileged, take to the streets, and a tipping point arrives. And during the run-up to the tipping point, lack of human rights moves from long-running private resentment to slogans on placards.

In the case of Iran, that tipping point arrived in the summer of 2009. The problem for the protesters was that they were unable to carry the have-nots with them in sufficient numbers. The state apparatus isolated and suppressed them. Iran is a country rich in natural resources. Its ability to exploit those resources has been limited by its international isolation through political and economic sanctions. If those sanctions continue to bite, and the subsidies and welfare programmes put in place by President Ahmadinejad in order to placate the have-nots become economically unsustainable, expect the tipping point to arrive again.

But the catalyst will not be the threat of military conflict. Exploiting fear of external threats – or fear of real or fabricated internal enemies – is often the means by which autocratic regimes maintain power. No nation likes to see itself in the gun sights of a foreign power, and military intervention over the nuclear issue is likely to bind Iranians together rather than spark the next uprising. The trigger is more likely to be an internal event such as the disputed election of 2009. But the longer Iran finds itself in its bind of stunted development, the greater that chance that the demand for political change will eventually yield results.

The threat to China’s ruling class would seem to be more remote. The country is growing at an unprecedented rate. Its middle class is becoming wealthier as the economic benefits of the country’s development  trickle down. But it still has a massive population of the under-privileged. People who feel that the economic revolution has passed them by. Who work in factories at survival wages. Whose homes have been bulldozed or submerged as China undertakes its massive urban development and irrigation projects. Whose family structures have been skewed by the gender imbalance resulting from the one-child policy.

Again, common grievances among the downtrodden are unlikely to change the status quo. But if China’s economy –  seem by some economists as having the classic symptoms of a potential bubble – should suffer a crash, then a rapid downturn affecting the hard-earned wealth of the new middle class could act as the trigger that turns the heat on the regime.

As to the immediate future, Amer Taheri, a far more erudite commentator than me, has some interesting views in his recent column in Asharq Al Awsat – Egypt – change within the regime, not regime change. In the first part of his article he talks in scathing terms about the Iranian regime’s attempt to characterise the events in Egypt and Tunisia as triumphs of the Khomeini revolution. Later on, he talks about the nature of the changes in those countries:

So, if Tunisia and Egypt today are not like Iran of 32 years ago, are they following some other model?

I have before argued labelling the Tunisian and Egyptian events as revolutions to be premature.

What we may end up with in both cases is change within the regime rather than regime change as was the case in Iran.

Each in its own way, Tunisia and Egypt may be following the model developed in a number of Asian and Latin American countries in which autocratic regimes based on the armed forces gradually evolved into democracies.

This was the case in South Korea and Taiwan and, more recently, Indonesia. It has also been the case in Argentina, Brazil, Chile, Colombia and Guatemala among others.

The process goes something like this: an autocracy evolves into a plutocracy that allows a widening space for dissent that, in turn, succeeds in broadening its base. In the meantime, economic success produces a larger middle class, the key ingredient for pluralist politics.

Thanks to economic development and inclusion in the global trading system, all the countries mentioned ended up looking like their democratic partners.

In every case, however, a popular movement for reform maintained the necessary pressure to achieve change of direction. Without political reform there could be economic growth but not genuine economic development. This is why the “Jasmine Revolution” in Tunisia and the freedom fest in Tahrir Square were needed to provide the necessary pressure to get the country out of an historical impasse.

One factor he didn’t mention is the economic power concentrated in the military establishments – the fact that the Egyptian army has many investments that it would wish to protect, as do the Revolutionary Guard in Iran, and the People’s Liberation Army in China. Mitigating or unpicking those vested interests will, in the case of Egypt, and would be,  in the case of Iran and China, no easy task.

But I particularly like Taheri’s distinction between economic growth and economic development.

Growth can be to the benefit of the few. Development should benefit the many. There are many regimes in the Middle East and beyond that will perhaps be asking themselves which of these conditions apply in their countries

One Response to Egypt: A Role Model for the ‘Have Nots’