Egypt: A Long Road to the Starting Point 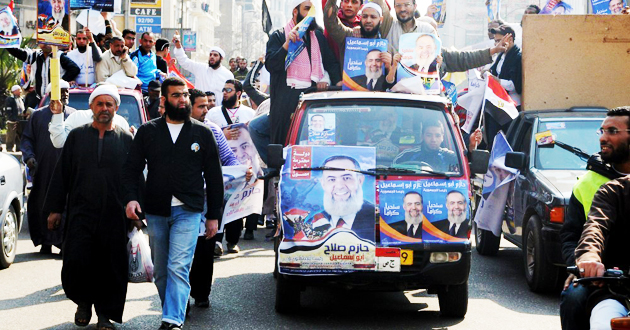 On the fourth anniversary of the April 6 protests, an invisible voyeur looks down from above, sporting a grin that is part gloating and part ‘mission accomplished’.

Back in the day, when the seeds of Egypt’s recent popular uprising were sown through a Facebook page calling on Egyptians to support Mahallah factory workers who were threatening to go on strike, and urging people to observe a day of civil disobedience, the impromptu street protest was swiftly crushed by Mubarak’s security forces.

Subsequent arrests of young activists became part of a systematic crackdown on young virtual activists who, less than three years later marched at the forefront of what came to be known as the January 25 Revolution, the popular 18-day revolt which led to the ouster of Egypt’s 30-year dictator.

Fast forward a year or so and the irony of the political reality in Egypt is enough to make you laugh and cry.

While it was no surprise that the country’s leading Islamist group, the Muslim Brotherhood, whose political arm the Freedom and Justice Party (FJP) is now the most powerful force on the street and in parliament, was bound to fill the ensuing political void, the jury was out on whether the group will seek to dominate the scene altogether.

But the seismic events of the past two weeks have transformed the formula fundamentally. Although confusion and mystery seem to shroud the picture, the opposite is also true: much speculation that accumulated over the past year about back door deals, under-the-table alliances and behind the scenes negotiations have partially, if not finally, been confirmed.

It is no longer a secret that SCAF has been manipulating the developments all along. When the military rulers sometimes seemed to be in bed with the FJP, it’s obvious now that they only did so to give them enough rope to hang themselves. The FJP’s decision to field their chief financier and strategist Khairat Al-Shater to contest the presidential election could not have been made possible unless SCAF granted Al-Shater an official pardon only days before the decision was made public following the MB’s Shoura Assembly vote last Saturday. SCAF was part of the deal from the get-go.

Results: unprecedented divisions inside the MB, with some veteran members publically chiding the group’s leadership for what is beyond a doubt a reflection of a duplicitous rhetoric, where they reversed multiple promises not to contest the presidency under the false pretext of “protecting the revolution”; mass walkouts by MB youth; the disappointment of MB sympathizers, who have justifiably lost trust in a group perceived as having lost its moral compass.

Simultaneously, the tragi-comic fate of Salafi presidential frontrunner Sheikh Hazem Salah Abu Ismail is also playing into the hands of SCAF. The irony of the circumstances of Abu Ismail’s near political demise cannot be overstated. For the man who based his entire campaign strategy on a narrow focus on identity politics, setting himself up as the bulwark of resistance against US hegemony, winning the hearts and minds of frantic supporters by asserting Egyptians’ cultural and religious otherness, to be disqualified from the presidential race because of his own mother’s dual US-Egyptian citizenship, is a pure revelation of law of karma.

Like most Salafis, Abu Ismail was one of the avid supporters of a stipulation in the March 2011 constitutional amendments that barred current or former dual citizens whose parents or spouse carried another citizenship from contesting the presidency, most likely in a bid to sideline potential liberal candidates.

Today, that same issue has not only emerged to bite him in the proverbial backside, but is threatening to expose him on a grand moral scale for being a barefaced liar, albeit allegedly, since the only evidence of his late mother’s US citizenship so far has been the appearance of her name on a voting register, which is only possible if she is a US citizen. It is unclear why the US embassy has not been officially requested by the Presidential Election Committee (PEC) to verify her status once and for all, but it is only a matter of time before the whole episode is exposed for what it really is.

It’s no secret that the SCAF, the MB and the US want to see Abu Ismail out of the race, but it’s highly unlikely that they would stage a conspiracy of such magnitude against him to ensure it. But try telling that to his supporters. If this news is verified, nothing will convince them that their dear leader was a phony except an unequivocal confession and public apology by the man himself; if he has one iota of conscience, this will be precisely what he’ll do; otherwise, the consequences could be dire.

With the stalemate over the make-up of the Constituent Assembly heightening anti-FJP sentiment, resentment of Islamists has reached a fever pitch, galvanizing a united non-Islamist front and increasing the possibility of SCAF intervention, which unfortunately will be welcomed by broad sectors of society.

Egypt is fast approaching full circle, masterminded by SCAF; and contrary to general perception, with the Brotherhood playing only a bit part.

The more things change, the more they stay the same. While we’ve come a long way since April 6, 2008, the challenges today are far more complex. The smirking omniscient narrator of Egypt’s political drama is banking on divisions, polemics and the growing apathy of a public on its knees, unequipped to face a looming economic catastrophe that will eventually tip the balance.