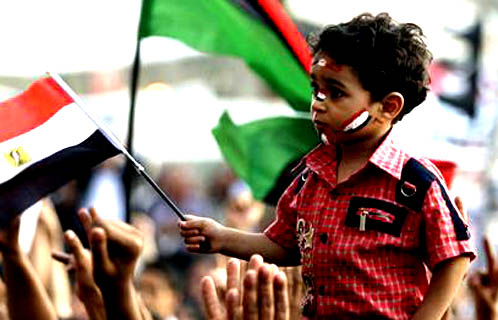 Last Friday, a huge protest was organised in Tahrir square. In the days leading to the Friday protest, several secular and Islamist organisations decided to agree upon a few main targets that the demonstration should focus on (prosecution of security officers, release of demonstrators, etc.), in order to prevent clashes between protesters. But what was supposed to be a day of unity turned into a day of division, when salafi demonstrators decided not to comply and started to raise slogans like “The people demand the implementation of the sharia!”

According to some protesters, they rejected the agreement because they were provoked by secularists: “Secularists are all over the media, trying to marginalize us because they think we’re ignorant,” said Islam Farris, a 23-year-old pharmacist.

“For the first time in history, all Islamic movements are united here because the secularists are provoking us.”

After a few hours, secular and liberal organisations pulled out of the square and held a press conference to explain their decision. “There was an agreement signed by all political groups including most of the Islamic groups to hold a national-unity Friday,” Mostafa Shawky of the Revolution Youth Coalition explained, “upholding the demands of the revolution, and sending a message to the Military Council that Egypt’s political forces cannot be divided. However, only controversial points and demands disagreed on have been raised in the square today.”

Another member of the Revolution Youth Coalition, Khaled Abdelhamid, said: “Sticking to our principle of always maintaining peacefulness, we have decided to withdraw from this Friday’s demonstrations while continuing our sit-in which upholds the revolution’s demands.” But shop owners in the area said they were fed up with the sit-in: “If they [the protesters] don’t open the square, all the residents and shop owners in the Talaat Harb area will go and break this sit-in up with our own hands,” a shop owners said.

Last Monday, on the first day of the holy month Ramadan, the army and security forces opened the square and destroyed the tent city, assisted by shop owners from the area. According to the LA Times, “The solidarity around the revolution that is splintering amid deep differences between protesters and millions of struggling Egyptians exasperated by the unrest and its economic consequences. The split reveals how young activists plotting rebellion in cyberspace are disconnected from the anxieties of millworkers and laborers.” “Enough is enough,” says Moussa. “These protests must stop. It’s sabotage.”

It is becoming clear that the demonstrators need to develop a new strategy to achieve their goals. Without grassroots support, demonstrations will not be tolerated by a large percentage of the people. This revolution will only be successful if the revolutionaries are in touch with the people.

Some activists suggested that, in order to win support from the people, political groups should refrain from demonstrating during Ramadan. Give the Supreme Council of Armed Forces (SCAF) time to implement the demanded reforms. After some time, more people will start to realize that keeping pressure on the ruling Supreme Council is important, because otherwise nothing will change.