Egypt’s Class Conflict: An Elite, and Everyone Else 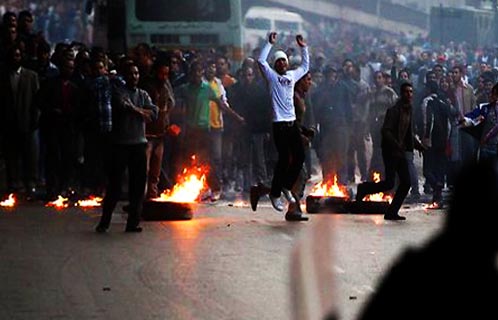 On Sunday morning there was some sign of the Egyptian military taking on some security duties. Soldiers started arresting suspected looters, rounding up 450 of them. The disappearance of the police from the streets had led to a threat of widespread looting is now being redressed by the regular military. Other control methods were on display. The government definitively closed the Aljazeera offices in Cairo and withdrew the journalists’ license to report from there, according to tweets. The channel stopped being broadcast on Egypt’s Nilesat. (Aljazeera had not been able to broadcast directly from Cairo even before this move.) The channel, based in Qatar, is viewed by President Hosni Mubarak as an attempt to undermine him.

Why has the Egyptian state lost its legitimacy? Max Weber distinguished between power and authority. Power flows from the barrel of a gun, and the Egyptian state still has plenty of those. But Weber defines authority as the likelihood that a command will be obeyed. Leaders who have authority do not have to shoot people. The Mubarak regime has had to shoot over 100 people in the past few days, and wound more. Literally hundreds of thousands of people have ignored Mubarak’s command that they observe night time curfews. He has lost his authority.

Authority is rooted in legitimacy. Leaders are acknowledged because the people agree that there is some legitimate basis for their authority and power. In democratic countries, that legitimacy comes from the ballot box. In Egypt, it derived 1952-1970 from the leading role of the Egyptian military and security forces in freeing Egypt from Western hegemony. That struggle included grappling with Britain to gain control over the Suez Canal (originally built by the Egyptian government and opened in 1869, but bought for a song by the British in 1875 when sharp Western banking practices brought the indebted Egyptian government to the brink of bankruptcy). It also involved fending off aggressive Israeli attempts to occupy the Sinai Peninsula and to assert Israeli interests in the Suez Canal. Revolutionary Arab nationalist leader Gamal Abdel Nasser (d. 1970) conducted extensive land reform, breaking up the huge Central America-style haciendas and creating a rural middle class. Leonard Binder argued in the late 1960s that that rural middle class was the backbone of the regime. Abdul Nasser’s state-led industrialization also created a new class of urban contractors who benefited from the building works commissioned by the government.

From 1970, Anwar El Sadat took Egyptian in a new direction, opening up the economy and openly siding with the new multi-millionaire contracting class. It in turn was eager for European and American investment. Tired of the fruitless Arab-Israeli wars, the Egyptian public was largely supportive of Sadat’s 1978 peace deal with Israel, which ended the cycle of wars with that country and opened the way for the building up of the Egyptian tourist industy and Western investment in it, as well as American and European aid. Egypt was moving to the Right.

But whereas Abdel Nasser’s socialist policies had led to a doubling of the average real wage in Egypt 1960-1970, from 1970 to 2000 there was no real development in the country. Part of the problem was demographic. If the population grows 3 percent a year and the economy grows 3 percent a year, the per capita increase is zero. Since about 1850, Egypt and most other Middle Eastern countries have been having a (mysterious) population boom. The ever-increasing population also increasingly crowded into the cities, which typically offer high wages than rural work does, even in the marginal economy (e.g. selling matches). Nearly half the country now lives in cities, and even many villages have become ‘suburbs’ of vast metropolises.

So the rural middle class, while still important, is no longer such a weighty support for the regime. A successful government would need to have the ever-increasing numbers of city people on its side. But there, the Neoliberal policies pressed on Hosni Mubarak by the US since 1981 were unhelpful. Egyptian cities suffer from high unemployment and relatively high inflation. The urban sector has thrown up a few multi-millionaires, but many laborers fell behind. The enormous number of high school and college graduates produced by the system can seldom find employment suited to their skills, and many cannot get jobs at all. Urban Egypt has rich and poor but only a small “middle class.” The state carefully tries to control labor unions, who could seldom act independently.

The state was thus increasingly seen to be a state for the few. Its old base in the rural middle classes was rapidly declining as young people moved to the cities. It was doing little for the urban working and middle classes. An ostentatious state business class emerged, deeply dependent on government contracts and state good will, and meeting in the fancy tourist hotels. But the masses of high school and college graduates reduced to driving taxis or selling rugs (if they could even get those gigs) were not benefiting from the on-paper growth rates of the past decade.

The military regime in Egypt initially gained popular legitimacy in part by its pluck in facing down France, Britain and Israel in 1956-57 (with Ike Eisenhower’s help). After the Camp David accords, in contrast, Egypt largely sat out the big struggles in the Mideast, and made what has widely been called a separate peace. Egypt’s cooperation in the Israeli blockade of Gaza and its general quiet alliance with the US and Israel angered most young people politically, even as they racked up economic frustrations. Cairo’s behind the scenes help to the US, with Iraq and with torturing suspected al-Qaeda operatives, were well known. Very little is more distasteful to Egyptians than the Iraq War and torture. The Egyptian state went from being broadly based in the 1950s and 1960s to having been captured by a small elite. It went from being a symbol of the striving for dignity and independence after decades of British dominance to being seen as a lap dog of the West.

The failure of the regime to connect with the rapidly growing new urban working and middle classes, and its inability to provide jobs to the masses of college graduates it was creating, set the stage for last week’s events. Educated, white collar people need a rule of law as the framework for their economic activities, and Mubarak’s arbitrary rule is seen as a drag here. While the economy has been growing 5 and 6 percent in the past decade, what government impetus there was to this development remained relatively hidden– unlike its role in the land reform of the 1950s and 1960s. Moreover, the income gained from increased trade largely went to a small class of investors. For instance, from 1991 the government sold 150 of 314 state factories it put on the block, but the benefit of the sales went to a narrow sliver of people.

The world economy’s [pdf] setback in 2008-2009 had a direct and horrible effect on Egyptians living on the edge. Many of the poor got hungrier. Then the downturn in petroleum prices and revenues caused many Egyptian guest workers to [pdf] lose their economic cushion. They either could no longer send their accustomed remittances, or they had to come back in humiliation.

The Nasserist state, for all its flaws, gained legitimacy because it was seen as a state for the mass of Egyptians, whether abroad or domestically. The present regime is widely seen in Egypt as a state for the others– for the US, Israel, France and the UK– and as a state for the few– the Neoliberal nouveau riche. Islam plays no role in this analysis because it is not an independent variable. Muslim movements have served to protest the withdrawal of the state from its responsibilities, and to provide services. But they are a symptom, not the cause. All this is why Mubarak’s appointment of military men as vice president and prime minister cannot in and of itself tamp down the crisis. They, as men of the System, do not have more legitimacy than does the president– and perhaps less.

One Response to Egypt’s Class Conflict: An Elite, and Everyone Else