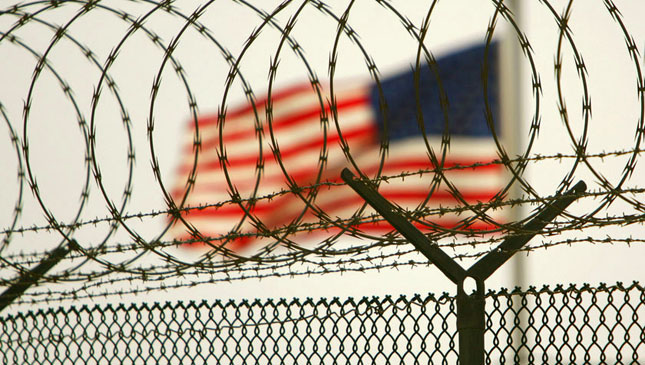 Clearly there are obvious differences that cannot be overlooked. Israel’s policies of detention are solely based on colonial territorial objectives used to ensure Israel’s domination and  control of the Palestinians and their resources. And since Palestinians are unanimous in their desire to end their occupations; the entire Palestinian population is implicated and are fair game for Israel to arrest and detain. In addition Israel operates a-one-of-a kind judicial system. A military run and operated judicial system primarily designed for Palestinian detainees, which allows Israel to strip Palestinians of their legal rights; and a civil judicial system that provides Israelis the full protection of the law.

Despite the obvious differences the US and Israel detention policies share similar strategies and outcomes. In 1982 two years after President Reagan took office he lunched a direct public relations  campaign that framed casual drug use as a domestic national security threat. Reagan’s campaign helped shape and change public perception of drug use in the US that allowed him to mobilize support for his ‘drug war’ policies. It is important to note that the Reagan administration’s choice of terminology – “drug war” – implied a US military strategy and identified a public enemy.

While it is generally understood that most drug users are White Americans; the Reagan administration conveniently used and manipulated the deep-seated racial discrimination, bias and suspicion of White Americans and aptly framed minorities and people of color a public threat and enemies. The US drug war was  politically motivated to reinforce Reagan’s credentials as protector of American safety and family values, and he was amply rewarded. Reagan’s war on drugs received wide public support and  fostered remarkable unity between the US legislative branch and the Reagan White House.

The wide appeal of the ‘drug war’ was well noted by Republicans and Democrats, and both helped institutionalize its practices across the US by allocating billions of tax dollars annually for its implementation. Consequently the lucrative earnings reaped by public and private institutions secured the ‘drug war’  broad political structural support that helped ensure the  continuation and funding of the ‘drug war’ policy.

Like wise since 1967 Israel has employed a long-standing and well-orchestrated public campaign to ensure Israel’s illegal occupation of Palestinians and its mass detention practices are supported within Israel.

Accordingly Israeli leaders identify Palestinians as enemies and contends that Israel’s brutal occupation and wholesale detention of Palestinians are vital to its national security. Israel deploys young Israeli soldiers to administer Israel’s detention policies, which further entrench Israel’s occupation;  provides its young ones national experience centered on executing Israel’s occupation and detention policies; and helps root IDF soldiers’ distinctive identity as protectors and defenders of Israel’s security. The occupation also provides IDF soldiers a tangible experience that reinforces their belief that Palestinians are hostile enemies – that the IDF must restrict, control, restrain and tame. Accordingly Israel’s mass detention of Palestinians is an essential strategic tool to help Israel control that population, their resources, and properties and to restrict their movement.

So what are the implications of the US and Israeli detention policies? The US has the highest detention rate at 716 per 100, 000, which is considerably higher than every other nation including Russia, which has the second highest rate at 577 per 100,000. The US submits data of its entire prison population, which includes comprehensive count of the number of prisoners, their ethnicity, color, and gender. Analysis of the composition and make up of US prison population reveals systemic bias where communities of color are disproportionately represented and affected.

While Israel refuses to submit the number of Palestinians it detains in Israeli prisons, it does report the rate of Israelis detained in Israel at 236 per 100,000, which ranks Israel at 55 among 221 nations – slightly worse than Columbia, which is ranked 56 in the world. But if Israel includes the number of Palestinians it detains, Israel’s rank and rate will surpass every other nation in the world including ours. Israel has detained and arrested more than 20% of the entire Palestinian population (2 for every ten Palestinians), and 40% of all Palestinian males. This rate does not include Israel’s practice of multiple re-arrests of the same individuals.

Additionally both Israel and the US have employed laws targeting young minors. In the US these laws are tailored to adjudicate young minority offenders as young as 13 years of age, and many have of these young Americans have been condemned to life prison terms. Israel on the other hand arbitrarily reduced the age that Palestinian minors can be tried as adults to 16 at the time of their hearing– meaning if Israel arrests these young children at age 14 Israel’s administrative detention laws allows Israel to keep them in prison for two years to then charge them as adults.

Human Rights organizations have condemned both the US  and Israel for their subjective detention practices of young children. Both governments have been sited for holding young minors, charging and convicting them as adults with no regard to their age, maturity, conditions or state of mind. In addition detaining young minors as adults allows both Israel and the US to evade their legal obligation to these minors, and waives their right to access age appropriate programs to address their emotional, educational and mental needs.

In addition the US and Israel have conveniently used administrative detention to capture and forcefully transfer prisoners. Albeit Israel’s detention practices in Palestine is broader, longer and more extensive in scope and reach, nevertheless for more than a decade the US has employed administrative detention to hold Guantanamo Bay prisoners captured abroad on foreign soil. Since 2002 the US has transferred 799 male prisoners, among them 22 young boys to Guantanamo Bay. The Bush administration chose Guantanamo Bay prison to circumvent the application of US Constitutional rights to these prisoners. Six hundred of the prisoners have been released and eight have died in US custody under questionable terms, and while  most were released without charge few of those released were transferred to their home country to serve their terms.

Today Guantanamo Bay prison holds 166 prisoners, where more than half of these prisoners have been cleared for release in spite of the feverish and extensive  efforts of the Bush and the Obama Administrations. Although President Obama promised in his first term to shut Guantanamo Bay and release the prisoners held without charge, so far his administration has failed to do so. Meanwhile innocent detainees are subjugated to harsh prison conditions away from family, friends, and country without reason, which by every legal and moral standard can only be seen wrong.

Coincidentally both the US and Israel are currently facing hunger strikes within their prisons that has been largely ignored by their respective populations. About five weeks ago Guantanamo Bay prisoners began a non- violent hunger strike to call attention to their plight. Oceans apart  Palestinian prisoners detained in Israel’s military prisons are also waging a peaceful non-violent protest by refusing to eat. Their aim is to bring attention to Israel’s indiscriminate wholesale administrative detention policy.

So what do these subjective detention policies employed by the US and Israel tells us? Racism and discrimination are a root cause of ill for both societies. Leaders and politicians in both countries employ racialist doctrine to manipulate public opinion and advance narrow political interests. They frame the ‘other’ as the enemy to ensure public support by stoking and peddling hate that help generate wide acceptance of inhumane policies and practices that were once unimaginable in either country.

US anti- drug rhetoric was a deliberate political tool skillfully designed to tap into deeply held cultural attitudes about people of color, it offered American politicians and leaders to appear strong; concerned about the safety of the American public; and protectors of American security and social values. Likewise Israeli leaders exploit Israel’s public sentiments and fears by deliberately sustaining their deep-seated mistrust and bias against Palestinians to control Palestinians and to expand Israel’s illegal settlements.  Most Israeli and American political leaders are guilty of reinforcing and rooting social bias and discrimination against the ‘other’ within their respective countries, which contradicts their stated social values and democratic principles.

By almost any measure, the US war on drugs has devastated  generations of Americans. Since 1982 African Americans and Latinos have been targeted, imprisoned and unfairly treated and their communal constitutional rights have been violated with the consent of US legislatures and the public. For four decades the US  ‘drug war’ has affected the livelihood and well being of countless of families and disenfranchised and marginalized a swath of Americans.

Israel’s administrative detention practices have also impacted an entire population where the quality of life of each Palestinian is challenged and compromised.

The fear of detention affects and restricts Palestinian movement, freedom, and dignity. It emasculates Palestinian fathers and mothers who are powerless and unable to protect their young and families from Israel’s daily abuses.

US Guantanamo Bay prisoners and Palestinian prisoners are routinely tortured and abused. Neither the US nor Israel ponder on the futility of these detention practices, and seem unaware their tangible outcome is a degrading callousness that provides fire and fuel for radical elements to exploit – the same radical elements both governments claim to want to eradicate.

Finally, while overall most Americans and Israelis have been oblivious and supportive of their government’s detention practices, there is a growing and active progressive community combined with a handful of organizations that are taking their respective governments to task.

Israeli and Palestinian human rights organizations are challenging Israel’s wholesale detention practices and together they are collaborating to provide advocacy on behalf of prisoners. While their efforts have been largely unsuccessful, these cooperative efforts hold promise for the future by providing a working model for co existence and partnerships for both peoples.

Here in the US there is growing awareness of  the impact of the war on drugs on African Americans and Latinos where a host of advocates, organizations, academic and human rights institutions are forcing a public discussion on the merit and human cost of the war on drugs. Unfortunately Obama’s failure to close Guantanamo Bay and transfer its prisoners to the US so far has been largely ignored. Few Americans are aware of the Guantanamo Bay hunger strike, or the many innocents that have spent years of their precious lives in US custody for no reason.