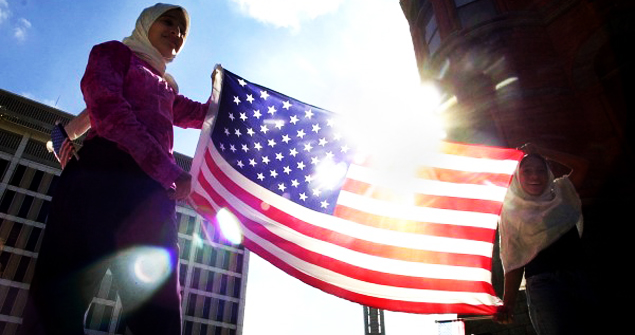 In August of 2011 the Center for American Progress published an in-depth investigation of the roots of American “Islamaphobia”. While the title of the 70 page report implies an exploration of the rise of anti- Muslim sentiments in the US, it also reveals an interesting intersecting campaign with a clear agenda- to impact policies beyond our shores.

The Center for American Progress identifies a set of people engaged in an interesting alliance. The report  names a small knit group of “misinformation experts” with access to few individuals at the helm of a handful of foundations who have successfully utilized America’s shared 9/11 horrific tragedies to advance a narrow political agenda.

While the casualty of this anti- Muslim campaign is to smear, spread hate and suspicion of American Muslims, Islam and Muslims at large; the objectives of this campaign are clear, focused and specific. This anti- Muslim alliance is fueled by love- love of Israel.

Why should this matter?  Why should Americans care? This anti Muslim campaign is critical for a number reasons. It affects U.S domestic politics and perceptions; it has been an impetus for weakening privacy laws and US constitutional protections; it is of consequence to our regional relations in the Middle East; our perceptions and dealings with the Muslim world; and our geopolitical role. While Arabs and Palestinians are not all Muslims, this campaign has also influenced our political views on Palestine, and the Arab Spring.

These funders and their misinformation experts are strategically using anti-Muslim sentiments to enhance US- Israeli relations; to promote American support for Israel and its occupation of Palestinians; and to advance Israel’s profitable illegal settlement enterprise.

The cost of this anti-Muslim campaign is a taxation on U.S. domestic and international politics, interfering with its strategic regional and global interests.

The methodical campaign has had considerable impact on U.S. declared national interest in advancing the two state solution among Palestinian and Israelis. It has hampered the efforts of pro peace American groups including American Jewish groups interested in promoting better relations among Palestinians and Israel. This smear campaign limits the ability of peace advocates to forge support and collaboration among American groups to advance peace, and it complicates the work of national and international organizations, faith groups, and human right advocates working on ending the 45 year long illegal Israeli occupation of Palestine and its inhumane siege of Gaza.

Palestinians are comprised of Christians, Muslims, secular and others who since 2001 have had to contend with a calculating campaign that has had measurable influence on their desire and the desire of like -minded Israelis to end Israel’s military control of Palestinians day-to- day lives. This anti- Muslim campaign whose aims are to promote Israel’s current destructive policies of expansion has had a considerable effect on Palestinians.

In addition this campaign has impacted the U.S. discourse, principles and attitudes. Advocating prejudicial views of American’s faith contradicts with America’s core values. These negative sentiments used to demonize American Muslims have seeped into the larger American consciousness influencing the civility of our national discourse on race, faith, ethnicity and minority groups, which has deteriorated as demonstrated by recent reports and polls .

America’s diverse composition that was once considered part and parcel of our national fabric and American identity is straining. Injurious perspectives of American Muslims are emboldening and shielding extremists to express derogatory views of other American groups. Americans have now become accustomed to hear sweeping inflammatory hurtful views of American Muslims and consequently have become less sensitive to inappropriate disparaging views of other groups.

The hate of Islam and American Muslims internalized and accepted has unleashed anti attitudes of groups perceived to be outside the majority – Blacks, Latinos, Catholics and social movements such as gay and women’s rights groups. Ordinary folks serving in the military, law enforcement officials, current and aspiring politicians, pundits, journalists, students, teachers and legal experts carry and share these negative views that spew and allow bias of other groups and minorities.

Not only has this smear campaign merged the love of Israel with the hate of Muslims, resulting in considerable harm to our national discourse, interests and our world standing it has also numbed American regard for our basic fundamental human rights here at home and international law abroad. The campaign has desensitized Americans to the considerable damage unleashed on our constitutional guarantees. Since 2001 American Muslims have been used to advance domestic initiatives that would have been impossible prior to 9/11.  Once Americans approved our law enforcement abuse of American Muslim liberties, privacy and constitutional rights, knowingly or unknowingly we agreed to suspend the liberties of all American citizens.

The fragility of our democracy is threatened with little understanding of how we have permitted a small number of misinformation experts and their funders to actively weaken our political democratic system endorsing prejudice and abuse of American Muslims.