Inept or Culpable, the SCAF Must Go 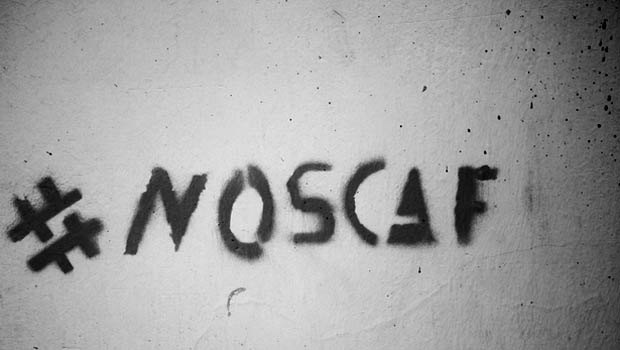 CAIRO: One of my childhood friends buried her son yesterday. He was 22. His name was Omar. He had his whole life ahead of him. No one could have imagined that Omar, like over 70 other Ahly club fans, was going to return from a football game in a coffin.

The massacre committed in Port Said on Wednesday night when thousands of fans of the home team Al-Masry, which had secured a rare 3-1 victory over Al-Ahly, stormed the pitch and launched a deadly attack on Ahly fans in the bleachers, was no spur-of-the-moment act of mob behavior. It was a carefully premeditated counter-revolutionary plot to sow sedition and set Egyptians against each other to eventually justify the continued presence in power of the Supreme Council of the Armed Forces (SCAF).

According to news reports, some of the victims were trampled in the stampede but others died of stab wounds and locally-manufactured pistols. An eyewitness told this newspaper that even when they tried to flee the stadium, Al-Ahly fans were trapped because all the exits were closed by army personnel from the outside. The crowds of fleeing victims had to push open the gates. That’s when many were crushed as they heaved their last breath. Others were tossed to their death off the top of the bleachers.

Zamalek club’s Ultras White Knights member and author of the recently-published book “Ultras” (reference to the die-hard football fan clubs) Mohamed Gamal Beshir, further explained in an interview with Yosri Fouda on ONTV Thursday night that the security measures taken in the match, which he watched on television, were insufficient for a match of this magnitude.

Through his years of experience monitoring, observing, analyzing and writing about local football, Beshir, also known as Gemyhood, explained that the most radical fans are always seated in the stands behind the goal posts on either side. In cases where pre-match tensions are high, such as the Masry-Ahly game, security forces are usually positioned in multiple (at least three) parallel rows on the track between the fans and the edge of the field. The numbers deployed on the home team’s side usually outnumber the guest team’s side because the numbers of spectators are lower.

Yet on Wednesday, many of those measures were overlooked. Security forces on the Al-Masry’s side were a single row. Video footage taken moments after the referee blew the whistle marking the end of the match, showed a breach in the single row of central security forces through which the assailants entered the field and it was clear that they were not given orders to stop them. On the other side, what Gemyhood described as a paltry police presence, showed two vertical rows of police practically lined up to allow the assailants through.

Many also noted that for the first time both the governor of Port Said and the city’s Chief of Security did not attend this major premier league match.

Another Ultras Ahly member who was in Port Said described how signs that something was amiss were building up gradually from the start of the day. First, the Al-Ahly club administration told them Wednesday morning that the buses hired to transport fans to Port Said had pulled out last minute “out of fear” that something would go wrong. So they took the train which was pelted with rocks as they approached Ismailia, then about 30 kilometers before Port Said, they got off and boarded buses where they were escorted by security until they reached their destination.

During the warm-up sessions, Al-Masry launched fireworks that wounded two of the Al-Ahly players, yet no measure was taken to stop or arrest them. The same happened in the intermission between the first and second half of the game, when he says some 50 fans stormed the field. Three of them reached the bleachers and lit up fireworks that could have been fatal before they were apprehended.

There is no question that had there been an airtight plan to ensure that no clashes would take place, this plan would have been implemented and this carnage avoided.

This was no episode of football hooliganism. Egypt’s supreme leader Field Marshal Hussein Tantawi said it all. In the only remarks by SCAF since the massacre, Tantawi dismissed the incident as “something that can happen anywhere in the world” adding insult to injury by practically inciting citizens when he encouraged “ordinary Egyptians” to take action against those who did this.

My question to the Field Marshal is: What if the ordinary people believe that you and your council of “extraordinary generals” are ultimately responsible for this massacre? Are you inviting “ordinary Egyptians” to take action against you?

The bottom line is that 74 innocent youths were brutally murdered on your watch, General. Why and how this happened, is either one of two scenarios: That SCAF has failed to secure a football match, let alone a whole country; or that the Generals are complicit, and, as it has become abundantly clear over the past year, they are punishing Egyptians for the revolution and for speaking out against them.

Either case, the Generals bear a moral and political responsibility for this crime, just as they do for the October deaths in Maspero, the November deaths in Mohamed Mahmoud and the December deaths near Cabinet.

How can they justify their blatant incompetence when throughout two months of highly competitive elections, they managed to secure thousands of polling stations across Egypt’s provinces ensuring zero incidents of violence? How can they justify the deployment of over 5,000 police and security forces to secure 11 Tora criminals at a huge cost, while neglecting the security of a match that was bound to get violent?

SCAF apologists claim that it is not the Generals’ responsibility to oversee every nook and cranny in the country, since they have handed over full authorities to Cabinet, cancelled emergency law (supposedly to protect human rights unless you happen to be a “thug”); and since the People’s Assembly is in session.

This theory cannot be further from the truth. SCAF is responsible. They carry the same level of responsibility that justifies taking Mubarak to court. If not, why then is SCAF refusing to open the registration for presidential elections candidacy, even if merely to absolve themselves of responsibility and to prove to the people and to their elected assembly that they do not wish to manipulate the drafting of the new constitution and maintain power from behind the scenes?

The incitement campaign SCAF spearheaded against the revolution, with the Ultras at its forefront armed with their fearless challenge to structures of domination and repression embodied in SCAF and the Interior Ministry, began only weeks after Mubarak’s ouster.

Yet when the Jan. 25 anniversary passed without incident — despite ‘highly competent’ intelligence reports to the contrary of a conspiracy by internal and external enemies of the state to ruin Egypt and invite a foreign invasion, according to press statements by an unnamed General — it became imperative to stage a massacre to reignite calls for a return to a state of emergency and to stifle calls for a swift transfer of power to an elected president.

The diabolical plot has backfired.

As I write this, the third wave of Egypt’s ongoing revolution is underway across the nation. Clashes between protesters and police have claimed two lives in Suez and two in Cairo with over 1,400 injured, some with buckshot and rubber bullets.

The Generals have learned nothing, just like their former boss only days before his ouster.

Will “Friday of the Martyr” mark the first day of Egypt’s final emancipation from military rule?