‘Crabgrass in the Lawn’. The Darling of the Israeli Lobby 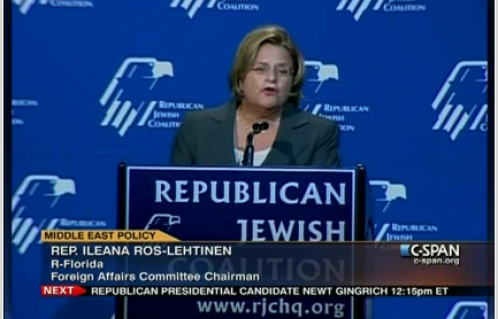 From an Israeli point of view, Representative Ileana Ros-Lehtinen is the ideal American politician. Although many in the US government aspire to her level of commitment to Israel, few can measure up to a dedication that extends beyond the very interests of her own country.

Ros-Lehtinen’s resume is a distressing read. The congresswoman “endorses US imperial wars, police state laws, corporate empowerment, tax cuts for the rich, laying waste to Libya, perhaps a second Bay of Pigs, and Israeli lawlessness, while, at the same, opposing Palestinian statehood,” according to Lendman.

It is, in fact, the “Israeli lawlessness” and her opposition to a Palestinian statehood that has made her a darling to Israel and its lobby. Unsurprisingly, Ros-Lehtinen has been rewarded handsomely for her die-hard support of Israel by some of the most powerful pro-Israeli individuals and lobby groups in the United States.

One of these individuals is Irving Moskowitz.

“The benefactor of a controversial Jewish development in eastern Jerusalem is a major donor to U.S. Rep. Ileana Ros-Lehtinen,” reported the Jewish Telegraph Agency on January 11, shortly after the congresswoman claimed her new post.

Moskowitz, the well-known American Jewish millionaire, made his fortunes as a ‘casino magnate’. A high proportion of the revenue he made from the gambling industry has been used to demolish Palestinian homes, raze ancient olive trees and fund Jewish settlements. It has also been used to finance Ros-Lehtinen’s campaigns.

Ros-Lehtinen is hardly swayed by such over-sentimental notions as ethnic cleaning. In fact, “Ileana Ros-Lehtinen: Ready to play hardball” was the title of a profile article in the rightwing Jerusalem Post on December 23, 2010.

For years, the congresswoman has advocated crippling sanctions against Iran, cutting any US funds to the UN Human Rights Council, United Nations Relief and Works Agency (UNRWA) and all support to the Palestinian Authority (PA). “This feeling that Abbas and Fayyad are the good guys, if they’re the good guys then we should start praying for Israel’s safety right now,” she said, despite the fact that both men have won the praise of many US officials and western institutions.

Now the PA – threatened by changes sweeping the region, and largely seen by most Palestinians and Arabs as a US-lackey that has secured neither peace nor Palestinians rights – has decided to seek admission into the UN as a member state. In response to this, Rep. Ros-Lehtinen has also decided to escalate her tactics. On August 30, the congresswoman introduced a new bill – “HR 2829: To promote transparency, accountability, and reform within the United Nation system, and for other purposes.” Known as the United Nations Transparency, Accountability, and Reform Act of 2011, and backed by 57 co-sponsors, the bill appears to be an act of collective punishment against UN members for daring to consider such a legitimate demand as admitting the state of Palestine in prospected vote sometime in September.

“Ros-Lehtinen’s irresponsible bill would slash 50% of the United States’ contributions to the UN’s regular budget if her unrealistic demands aren’t met,” wrote Don Kraus in the Huffington Post (September 2).

These demands, and many others, are aimed at isolating Palestinians, stifling all criticism of Israel, and propping up Israel’s legitimacy in the face of international uproar resulting from Israel’s illegal occupation and continued violations of human rights. Since they are clearly stated with the prior knowledge that they will not be met, Ros-Lehtinen’s intention is probably to take the US’ relationship with the UN back to the dreadful days of neoconservative US ambassador to the UN, John Bolton, who continues to serve as a bulwark for Israeli interests whenever possible.

But Ros-Lehtinen seems to have surpassed the benefit of the likes of Bolton. Morrie Amitay, former executive director of the lobby group, Israel Public Affairs Committee (AIPAC) enthusiastically told the Jerusalem Post last year, “I think she’ll be terrific on Israel relations issues. I don’t think there’s anybody better. She’s 100 percent behind making Israel secure. I can’t think of any issue affecting Israel in which she hasn’t been on the right side.”

She is definitely on the ‘right side’ of Israel’s and it policies. However, she is not necessarily on the right side of the US, which is in urgent need of altering its policy in a region that is rife with popular revolutions demanding justice, democracy and human rights.

“We need to help Israel, we need to show Israel that we are strongly in its corner,” Ros-Lehtinen stated days before she officially claimed her post last January.

Aside from issues pertaining to Israel and Palestine, Ros-Lehtinen’s resume is filled with episodes so shameful that they seem to lack any moral frame of reference. For example, the congresswoman was credited for rallying her Republican peers at the Congress to defeat a “bill Dec. 16 that would have committed the United States to combating forced child marriages abroad,” according to The Washington Post (December 22, 2010).

Ros-Lehtinen remains committed to such a dismal legacy, now going after organizations that provide housing, schools and health care for Palestinian refugees and other plighted people.

All of this is done in the name of Israel, at the expense of global security and United States leadership (or whatever still remains of it)