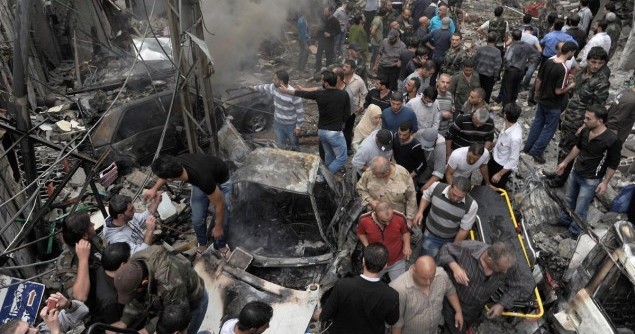 Monday’s bombs in Bahrain were a bit close for comfort. All of them went off in areas I know well and visit often. The reaction in the local press was predictable – expressions of outrage and determination to catch the perpetrators. Unfortunately, to blame the current situation on a tiny minority of people is stating the obvious. The power of terrorism is that it is asymmetrical – as has been seen in countless campaigns throughout the world.

The timing was perhaps linked to the fact that the Government has banned all demonstrations and public gatherings – the first time this has happened since the ban on association was lifted in the aftermath of the protests of 2011. Given the increasing polarisation of opinion on the island and the seemingly endless “activities” in the villages in recent months, the latest move is hardly surprising.

Some form of reaction from “the other side” – whether it be continued violent assembly in the villages in defiance of the ban, or worse – was also predictable.

And that worse has happened. Sadly, the victims were the most vulnerable members of the community – Asians in low-paid jobs, many of them living in the densely populated areas where the bombs were planted. Many of them live in crowded, low-grade accommodation, and struggle to pay off debts that they incurred as the price of getting jobs in Bahrain. Over the past year, more than 30 Asians have committed suicide.

If this is an example of economic insurgency, then I question the intelligence of the insurgents. If the motivation for attacks on Asians is the desire for revenge for the actions of their compatriots in the police force, then I could understand the twisted logic. But if the idea is that killing a few Asians will bring the economy to a standstill, then the perpetrators are naïve in the extreme. The life of a low-paid expatriate worker is dangerous enough already, as the high incidence of domestic fires, road accidents and industrial injury attest. Yet another risk is unlikely to spark an exodus. Even if some do leave, there are surely many in their home countries ready and waiting to take their places.

The Government and those behind the bombings know that there are many targets of higher value than the poor Asians that were killed or maimed this week. I won’t spell out what those targets might be. Suffice it to say that there are many people in Bahrain – expatriate and local – who have a far higher impact on the prosperity of the economy than cleaners and street sweepers.

Whether or not we are now on a dangerous escalation path depends not only on the effectiveness of the Interior Ministry in catching the bombers. It also depends on a political process. Clamping down on demonstrations is, as I said, unsurprising and logical. But it will not be easy. For example, we need to bear in mind that we are a few days away from the Islamic month of Muharram.

The festival of Ashoura during Muharram normally brings the Shia devout on to the streets in processions mourning the death of Husayn bin Ali, son of the first Shia Imam, in the Battle of Karbala.

It would be tempting to compare the Ahourah commemorations with the marching season in Northern Ireland, when the lodges of the Orange Order take to the streets to commemorate the victory of the Protestant King William III over the Catholic forces of James II at the Battle of the Boyne. Since the Troubles in Northern Ireland started in the 1960s, the Orange Marches have been annual flashpoints in the sectarian violence that have dogged the province ever since.

There are parallels, but also differences. The Orange Marches are tribal events with sectarian and political overtones. Ashoura is a religious event with (currently) political undertones. If the Government’s intention is to ban the Ashoura processions, it must be aware that there is a strong risk of increasing violence in response to the ban.

But even if the authorities manage through the ban to keep the lid on the violence, efforts to reach political solutions should continue in step with law enforcement activities.

One of the reasons why I am somewhat discouraged by the prospects for a settlement – viewing the efforts as I do from afar – is the relative immaturity of the political system.

Members of Parliament react emotionally both to events and to views opposed to their own.  Feuds seem to break out between individual members, and Parliamentary sessions seem often to descend into shouting matches and exercises in finger pointing, with fingers most regularly pointed at government ministers and officials.

Government ministers and officials, unused to the art of politics, often take personal umbrage. So the net result seems to be a culture of backside covering, blame avoidance and bickering.

Perhaps Parliamentarians should take some lessons from some of the more mature democracies about what it takes to be effective MPs – learn to influence quietly as well as make noise publicly. Argue points coherently rather than surrender to the red mist of emotion. Stop blaming the usual suspects for the current problems. Focus on the big issues on which they can gain national consensus.

And I wonder whether Ministers should learn to persuade rather than dictate, implement rather than obfuscate, and go more quietly about their business instead of grandstanding in front of the media. I see too many meetings, too many events, too many press releases, too many photo opportunities.

The hallmark of a mature political system is also the attitude of ordinary citizens. In Bahrain I see too much reliance on the state as the universal provider of social welfare. The government cannot provide employment for everybody. It can provide healthcare, but citizens need to take greater responsibility for their own health. It can provide roads, but cannot keep repaving highways scarred by burning tyres. It can provide education, but cannot provide effective education without the active support and involvement of parents. It can provide emergency services, but can only do so much to stop irresponsible drivers, negligent property owners and businesses that ignore health and safety regulations.

Perhaps the citizens of Bahrain should ask themselves how they would have coped with the effects of Hurricane Sandy on the East Coast of the USA. Would they have shown the same level of self-help, resilience, community spirit and bi-partisan political will that the people and the authorities of New York and New Jersey have shown? I hope so.

The justice system is also a concern. I will steer clear of criminal justice, because the controversies in this area are pretty well known, and I cannot offer an informed opinion on the outcomes of the many criminal trials relating to the events of 2011. But there seems to be a chronic problem in the civil courts. There is a widespread opinion that the courts have not been keen to enforce judgements in favour of plaintiffs. I know of one person who has been waiting for ten years for recompense, despite the positive judgement of the court, and others who are in similar situations. There are many disputes pending that involve property developers that have taken deposits from investors and failed to deliver the promised properties.

Whether the problem lies with the courts or the legislation available to enforce judgements, I am not qualified to say. But I am left with the impression that to become involved in a court action to recover payment could be a painful, protracted process that would not necessarily end with the legal judgement. And that is not good for business.

So reforms to the justice system should focus in shortening the time (and cost) of reaching judgement, and providing stronger mechanisms for enforcement. This is not just a Bahraini problem, by the way. Saudi Arabia has similar issues, but the signs are that the Saudis are taking steps to address them. See this article in the Saudi Gazette about new measures to enforce the payment of alimony as an example.

I make these comments in a constructive spirit. I remain a friend of Bahrain, and I want the country and its people to prosper.

There is a way forward for Bahrain, and it has to be political. All parties should try to meet anger with calmness, intransigence with patience and aspiration with a sense of reality.

I apologise if this comes over more as a sermon than a blog post. The obstacles to be resolved are too complex and deep-rooted to be overcome purely by changes in attitude.  But a little more demonstration of higher brain function, and less of the lizard brain, would surely help right now.

One Response to Cool Thinking Not Grandstanding Needed in Bahrain Now