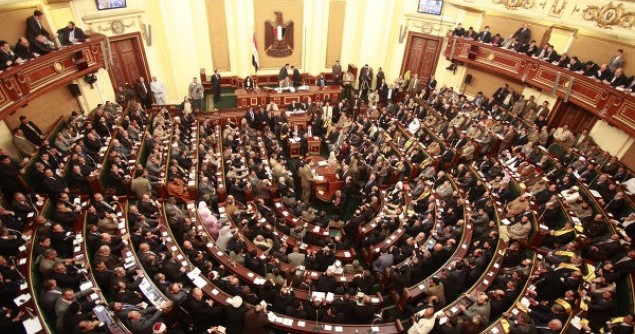 The initial reaction of the leadership of the Muslim Brotherhood and its Freedom and Justice Party to the high court decision dissolving parliament had been acquiescence. On Sunday, they got a bit more active, arguing that the Supreme Council of the Armed Forces (SCAF) did not have the right to dissolve parliament despite the court ruling (i.e. that it wasn’t the body with legal standing to do so). They also argued that the dissolution must be put to a popular referendum, since it voided the vote of millions of Egyptians.

All of this raises the question of why the Mubarak-appointed judiciary backed by SCAF moved against the parliament, which was dominated by the Muslim Brotherhood. I don’t believe that the SCAF coup was based on a rational calculation. Rather, I think the generals see the world as a conspiracy against them, and that the basis for their action was likely irrational.

Gen. Omar Suleiman addressed a letter to the Egyptian people Saturday, urging them to vote in the elections but implicitly criticizing the Muslim Brotherhood as arrogant and overbearing, and suggesting that you might hear them now talking about cooperating with everyone, but alleging that such talk is merely manipulative. Suleiman is a former head of military intelligence and was vice president in the last Mubarak government. He had wanted to run for president but was disqualified by the courts on the grounds that he hadn’t gathered enough petition signatures.

When I was in Cairo in May, a reporter told me that Suleiman gave a talk at the al-Ahram Center in which he alleged that the Muslim Brotherhood was preparing to develop a violent paramilitary capability. Generals such as he view the Brotherhood as not very different from al-Qaeda and as potentially violent, even though the organization gave up violence in the 1970s and has been disciplined about only using civil means to gain power ever since.

It also seems clear that the generals have a conspiracy theory that the United States is somehow behind the Jan. 25, 2011 revolt against Hosni Mubarak, and that Washington is secretly funding the leftist youth groups that spearheaded the big demonstrations then and since. That is why they keep harassing foreigners and journalists who seem too interested in Egyptian politics, and why they aired commercials recently discouraging Egyptians from speaking to foreigners.

Only a conspiracy theorist could simultaneously hold that the Muslim Brotherhood is a theocratic cabal with paramilitary aspirations and that the US is supporting it and other revolutionary forces.

Another alleged foreign player in Egypt is Qatar, which Egyptians see as a supporter and funder of the Muslim Brotherhood.

The Mufti or chief Muslim legal adviser of Egypt, Ali Gomaa, on Sunday riposted to an attack on him by the Muslim televangelist at al-Jazeerah Arabic, Yousuf al-Qaradawi. Qaradawi had blasted Gomaa for saying he was neutral in the presidential contest. Qaradawi insisted that all clerics had to come out for Muhammad Mursi, the Brotherhood candidate. (Actually using the pulpit to promote a partisan candidate is illegal in Egypt). Gomaa implied that Qaradawi is after personal glory and thinks he is a real Muslim while others are ersatz.

The subtext here is that many Egyptians see Qaradawi as a Muslim Brotherhood icon supported by the Qatari government. One Egyptian told me that when Qaradawi showed up in Tahrir Square in Feb. 2011 during the attempt overthrow Hosni Mubarak, it reminded him of Vladimir Lenin showing up in Russia after the initial revolution. Of course, Lenin later overthrew the parliamentary regime that briefly emerged, making Russia a communist dictatorship in the October Revolution of 1917. My friend was wondering if Qaradawi hoped to play Lenin in subverting a democratic revolution and putting in power an ideological one-party state.

One Response to Conspiracy: The Irrational Fear That Drives SCAF