Bulletin From Bahrain: Wisdom in Demand 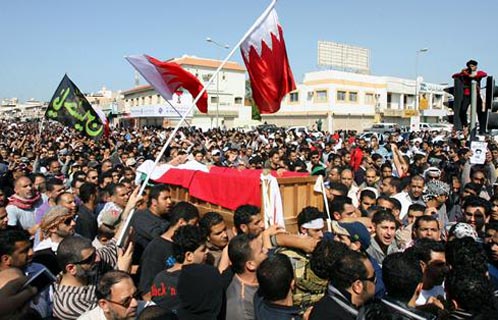 I’ve been contacted by a number of people from outside the country concerned about what is happening in Bahrain at the moment.

Now that coverage of events by the foreign media has started building up, I’m not sure that I can add much to the wide spectrum of opinion that has already been expressed.

What I can say is that in my neighbourhood, things are pretty quiet apart from a noticeable increase in helicopter traffic.

In government circles there seems to be some concern that external media coverage of the protests have been somewhat one-sided. One TV programme specifically referred to is the BBC World “Our World” edition that went out on Friday, which focused strongly on Shia grievances without presenting the alternative view that there are many Bahrainis whose standard of living has risen substantially over the past ten years.

There’s no doubt that the death of two protesters – the first from a deflected rubber bullet and the second, allegedly, from bird-shot wounds – has ratcheted up the tension. The main protest now seems to be focused on the Pearl Roundabout, one of Manama’s main intersections. According to one Bahraini I spoke to, there are “many thousands” gathered there. He believes that the protesters are planning to set up a Tahrir Square-style presence there. There are reports of one or two tents springing up, and of the security forces blocking road entrances to the roundabout.

On the Government side, King Hamad went on TV earlier today to apologise for the deaths of the protesters, and promise a full investigation into the circumstances. The Minister of Interior has announced that the  paramilitary security force has been given instructions not to intervene at the Pearl Roundabout unless they are themselves subjected to violence.

People I have spoken to discount the theory that the hand of Iran is influential in stirring up the protests. They say that this is Bahraini problem. Indeed, there have been placards saying “No Sunni, no Shia”. But it’s clear that there are long-standing sectarian issues behind the protests – rooted in perceptions of discrimination in employment, housing and education against the Shia majority.

There seems little doubt that the protests will accelerate political reforms. To what extent and how quickly remains to be seen. As in Jordan, the agenda of the vast majority of the protesters does not appear to be regime change. But the protesters of Bahrain are sailing with the winds of Tahrir behind them. The next few days will show where those winds take them.

Let’s hope that wisdom – on both sides – prevails.