“Bikya, Bikya”: The Street Cry That Speaks Volumes for Egypt 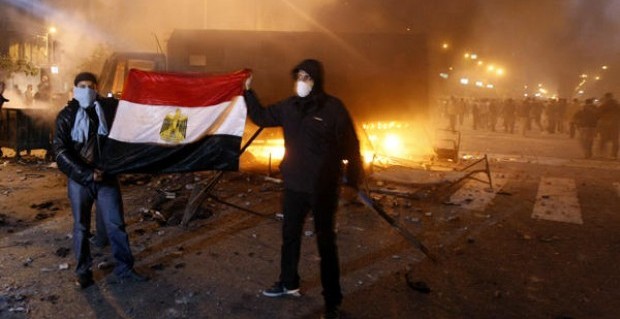 On 3 February I walked around my downtown Cairo neighbourhood to see how the latest street battles were proceeding. They began again (for the third time in as many months) following a 1 February riot in a Port Said sports stadium in which 74 people died. It seems fans flooded the pitch and started brawling after a soccer game. It wasn’t the first time the ruling Supreme Council of the Armed Forces (SCAF) was accused of either inciting violence or failing to stop it, but the headlines screamed “massacre!” before the dead were in their graves. By nightfall on 2 February protests had erupted into street fights with security forces near Cairo’s Ministry of the Interior just off Tahrir Square.

The blocks between my flat and the Ministry were quiet, with hardly a car in sight. I passed several junk-collectors wheeling their hand carts, calling out, “bikya, bikya!” – an Arabic transliteration of vecchia , which is Italian for “old”. The word originated at a time when Cairo was more cosmopolitan and people could afford to throw away things that seemed too worn for mending. These days the bikya men are everywhere, but they’re lucky if they can find an old fridge or television set, something to sell for scrap.

The familiar chorus – “old! old!” – seemed an appropriate soundtrack for the ravaged streets I saw before me, muddy from a recent rain, strewn with glass and rubble, garbage trapped in barbed wire coils, charred store-fronts, shattered windows. The smell of burnt wood and tear gas billowing a block ahead wafted my way on a gentle breeze.

Since the first anniversary of the uprising that ousted former president Hosni Mubarak, protests calling for an end to military rule have grown more urgent. The SCAF has made a mess of things, forcibly disrupting sit-ins and censoring critical press and media. Despite a reputation for efficiency, the SCAF-managed election preparation process was inept. Voting districts and polling procedures were left uncertain, campaigning was limited to several weeks and international monitors were not invited. Talk of banning members of the former ruling National Democratic Party and of forbidding the formation of religious parties came to naught.

Elections have since returned a lower house of parliament dominated by religious forces, which has so far proved ineffectual in the face of crisis. Voter turn-out for the higher house of parliament was low, alongside public morale. But emotion is running high, as people realise that the hole they have dug themselves into is deeper than they thought, and the future that seemed so promising last year has yet to materialise.

As I neared the Ministry of the Interior I saw men who had apparently been fighting, their faces smeared with the chalky liquid used to mitigate tear-gas effects, like war paint. A young man in a wheelchair was propelling himself forward beside me. He reached a burned-out car turned on its side as a barricade and clambered atop, his strong arms pulling the deadweight of withered legs. Up there, poised for a fight, he seemed happy, his infirmity forgotten – just like other men and boys I see fighting and displaying physical courage to forget, if only for a moment, their weaknesses.

The real battle is not on Cairo’s streets but inside Egyptians who have forgotten their true strengths, the consensual caring on display in Tahrir Square last year and the traditions of nonviolence that have allowed their society to endure. Nor has self-examination been high on the public’s agenda, between protests, clashes, and ramrodded elections – not to mention the need to put food on the table. Yet the shift in Egypt’s psyche since its symbolic patricide demands assessment.

Egypt’s authoritarian leadership has always been oppressive but people still relied on it, relinquishing civic responsibility to the state or god – resulting in such outcomes as they now confront. The issue of responsibility is at the heart of the matter: where does the state end and where do the people begin? This is a revolution inasmuch as these roles are now in question. Egyptians are trying to rid themselves of the very mechanisms they’ve long depended on to survive. But hurried by headlines, financial need and long-repressed outrage, they have yet to search themselves for more inspiring alternatives.

Many want SCAF commander-in-chief Mohammed Hussein Tantawi to fall like Mubarak and for presidential elections to happen right away. Without a pause for reflection, Egyptians seem fated to repeat themselves, their energies directed towards the humbling of one despot after another; not to end the despotism once and for all but to find one they can live with.

Walking home I saw another bikya man whose cart was empty. I wished I could fill it with broken concepts, like violence as a solution to anything and the cheap media spin that sells it, like paternalist politics and religion and the helplessness and resentment they’ve engendered – everything standing between us and our possibilities, all that is old and useless and deserves to be junked.

Maria Golia is an American expatriate author living in downtown Cairo. She writes a blog at www.mariagolia.wordpress.com