Bahrain: The Curious Case of the Iranian Flotilla 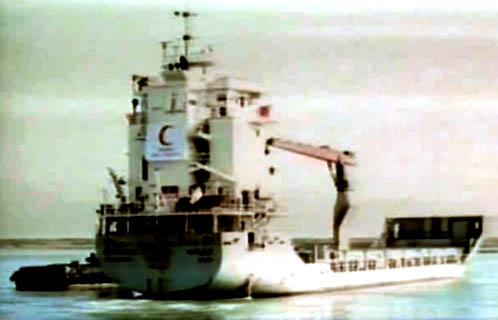 Bahrain’s Gulf Daily News yesterday picked up on a story in blog-of-blogs Pajamas Media stating that that an “Iranian aid flotilla” was due to set sail on the same day to show solidarity with anti-government protesters.

Today we learn that the flotilla, allegedly two boats full of students, scholars, doctors, women and children – oh, and a team to cover the event from the Iranian news channel Press TV – was ordered to return to Iran. Not, apparently, before dropping in the sea 5,000 letters of support for the protesters. Links relevant to the story are here:

The darker side of the story was that the blogger, who claims to be a former Iranian CIA agent, and writes under a pseudonym, stated that the Iranians are training volunteer Basiji paramilitaries for a “martyrdom operation” against Bahrain, and that the would-be martyrs were planning to be on the boat. The same blogger has previously claimed that the Iranians were responsible for the PanAm Lockerbie bombing of 1989.  The Iranian authorities, however, were quick to deny that the occupants of the flotilla were armed.

The whole episode seems rather odd to me. The flotilla never had a chance of reaching Bahrain, so it was clearly one of those pieces of political pantomime beloved in the region – taking a leaf out of the Gaza book perhaps. Then we have the ex-CIA man (why ex?) writing for a vaguely conservative and libertarian US media outlet, whose intention is clearly to make us locals afraid, very afraid. The other odd aspect is that the episode doesn’t seem to have attracted widespread attention in the mainstream international media.

So our nerves are rattled by reports of death squads heading our way, and soothed the next day by the news that in fact they ain’t going anyway, and that in any event there were no suicide bombers on the boat. It sounded like a nice day out in the Gulf for the Iranians, though.

Bahrain is involved in a delicate balancing act in its communications right now. One the one hand we are hearing stories of Iranian interference like this one. Given that the story appeared in the GDN and not its rival English language daily, the Daily Tribune, the story seems to be a piece of smart reporting on the GDN’s part. On the other hand, the government is keen to assure both the domestic and international audience that everything in the island is under control, and that things are back to normal.

It is going to great lengths to restore the confidence of the international investment community, of the Saudi weekend tourists and of Bernie Ecclestone, who it hopes will give the green light for the rescheduling of the cancelled Bahrain Grand Prix.

Things do appear to be improving on the economic front, although the damage to the small businesses – who don’t have the resilience of the bigger players – is palpable. But stories about Iranian death squads and suicide bombers do not help. Certainly that will not dismay the mullahs, who in their world view stand to gain from the economic destabilisation of the country.

Sadly, the ones who seem to be suffering most are the little guys, like the souk trader who according to the GDN has decided to close his 50-year old family business. The big hotel chains and family businesses can recover. Small businesses, many with roots stretching back to the old Bahrain, may not. And that will be a great shame.