Bahrain Bulletin: How to Get out of the Stalemate 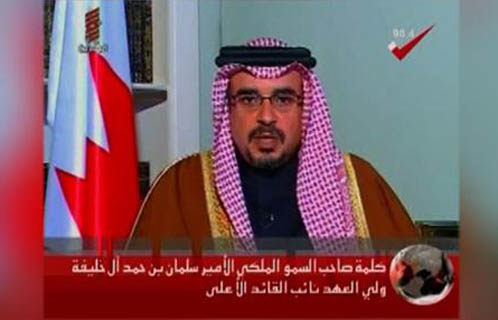 If you have read my last three posts on Bahrain, you will be relieved to know that I’ve run out of mundane descriptions of views outside my balcony window. This morning, though, I woke up at 7am, an hour later than yesterday, and three hours later than the day before.

That must be a good thing. Perhaps it was because there were no helicopters clattering around for the first time in a while.

Yesterday, the Crown Prince went on national TV appealing for calm and offering dialogue. The stated response of some opposition leaders was “no dialogue”. Yet later on we heard that he was holding discussions with opposition figures. And then we learned that police and army units had disengaged from Pearl Roundabout.

Perhaps it’s too soon to say that reason has finally prevailed, and that there is a potential way forward. Much depends on the assessment of the parties of the relative strengths of their positions.

The rapid bleeding of the Egyptian economy in the days leading up to the departure of Mubarak was a significant factor in swinging support of vested interests behind the change in that country. Egyptians who earn $2 a day will have been unlikely to be concerned at the estimated $300 million haemorrhaging from the economy every day. But powerful business interests will have been extremely concerned.

Here in Bahrain, a similar concern will be in play. Leaving aside for a moment the real dismay and shock felt in all quarters at the violent events of the week, the economic consequences of further disruption, and even stalemate, will be felt long after the protesters have left the street. The cancellation of the Bahrain Grand Prix in March would be an obvious symbol – both in terms of economic loss and wounded national pride – of those consequences. Less dramatic but more telling in the long run would be damaged international perceptions of the stability of the country. Such concerns could lead to foreign investment postponed or switched to other Gulf countries.

I can’t believe that anybody in Bahrain, except possibly those who would like to see the country purged by fire, wants that to happen. It will cost money to make the social changes demanded by those who see themselves as underprivileged. Not just funds reallocated from other budgets, but, in the long run, new money generated by the economy. And that means investment, ingenuity and a convincing national proposition.

So international perceptions are important. Not just the pious sentiments expressed by Hillary Clinton, but the views of the international business community that Bahrain has worked so hard to woo in the past ten years. That is why it was also important that the government tried to put its best face forward to the world yesterday, and will continue to do so tomorrow. Onlookers have become used to some unimpressive attempts at damage control from Arab leaders over the years – from the ludicrous claims of Mohammed Saeed Al Sahaf, the Iraqi Minister of Information, in the run-up to the fall of Saddam, to the dour expressions and words of Hosni Mubarak and Omar Suleiman in the final days of Mubarak’s reign.

That was why it was vital for the Crown Prince to radiate calm, and, most importantly, humanity, in his interview yesterday with CNN. And I thought he did the job well. The art of switching from the rhetorical style traditionally used when addressing an audience in Arabic to the more understated and conversational style that plays well with the Western media is one mastered by few Arab leaders. Ahmed Zaki Yamani, the Saudi oil minister in the 70?s and 80s, comes to mind as one of only a few expert practitioners. Yamani did a lot to humanise the Saudi government in the eyes of the world.

The Crown Prince is not a politician in the sense that elected leaders in the West are. He does not have the practiced delivery of a Tony Blair or a Barack Obama. Although fluent and articulate, at times in the CNN interview he seemed a little hesitant. But actually that was a refreshing change from the hectoring style of many Arab leaders. What made it especially important that he should come over as a sincere and concerned human being, was that he was doing so in the context of the demonisation of the royal family, and particularly of the King, by some influential foreign reporters.

For example, Nicholas Kristof in yesterday’s New York Times referred to what he described as the “brutality of a medieval monarch”. While I don’t condone the brutality of the police action, it was both insulting and inaccurate to imply that it was the click of a single person’s fingers that sent in the security forces. King Hamad sits at the apex of a government structure in which there are many decision makers – not one person in autocratic isolation – however tragically misguided some recent decisions might have been.

What’s more, whatever the inadequacies of the current system of government – which will no doubt be a subject of intense discussions in the coming weeks – Bahrain is as far from being an absolute monarchy as the British system of government is from the court of Henry VIII. In fact, as Kristof would discover if he took the time to find out, most of the monarchies of the Gulf states are also by no means absolute. They may not have systems of government that we in the West would consider optimal. But there are checks and balances in Kuwait, Saudi Arabia and other neighbouring countries that may not have a constitutional basis, but are nonetheless very powerful.

What happens from here? An educated guess is that there will be some social changes first – perhaps increased spending in some areas. These can be relatively straightforward. Constitutional changes will take longer, because the government will say that to amend a constitution – and create something that is fitter for purpose than that in place today – is no small matter, and will require widespread consultation and maybe even a referendum. And they would be right. Personnel changes? I wouldn’t hazard a guess, but perhaps there might be some form of reshuffle earlier rather than later.

But what is critically important, both for international and local stakeholders, is that the unequivocal message of change from the Crown Prince is translated into a demonstrable sense of purpose and urgency. It’s not enough to take action. That action needs to be seen to be taken – and clearly communicated to the waiting people of Bahrain.